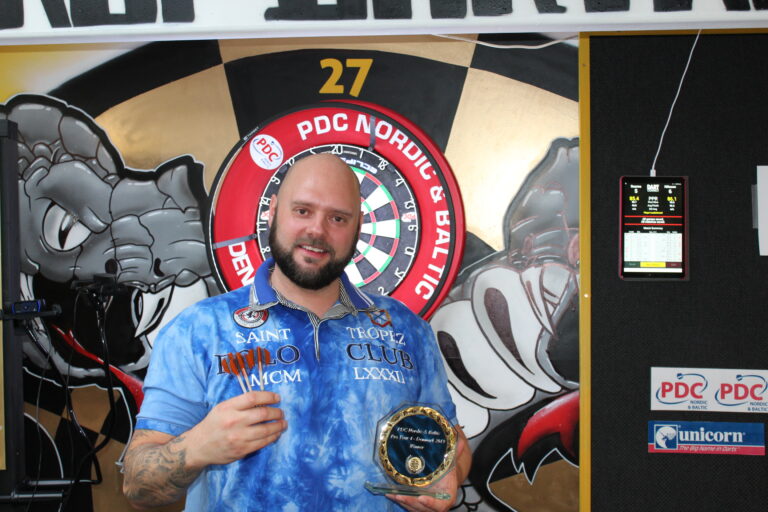 Sweden’s Dennis Nilsson, a former runner-up in his country’s Strongest Man competition, reigned victorious in PDC Nordic and Baltic ProTour Four in Copenhagen, following a narrow victory over Madars Razma in the final.

It was Nilsson’s second title on the PDC Nordic and Baltic scene, and his first for two years, with his maiden title coming back in 2017 in Norway.

The former Challenge Tour title winner began his campaign at the Slangerup Dart Club with a 6-1 win over Janis Mustafejevs, before dominant victories over Kim Viljanen and Ricky Nauman put the Swede into the last eight.

Back-to-back 6-2 wins followed for Nilsson, as he denied both Hannu Suominen and Lithuanian number one, Darius Labanauskas, to reach the final.

Nilsson survived match darts from Madars Razma in the final, but eventually came out a 6-5 winner to deny Latvia’s Razma a weekend double in Copenhagen.

Regardless of his defeat in the final, it was a blinding weekend for the Latvian number one, as he backed his title on Saturday with a run to the final on Sunday afternoon.

Elsewhere, Darius Labanauskas and Ulf Ceder both exited at the semi-final stage, while Oskar Lukasiak and Brian Lokken were among those to lose out in the last eight.

Danish home favourite, Per Laursen, and Daniel Larson were denied at last 16 stage of proceedings Finnish World Cup duo, Marko Kantele and Kim Viljanen, and Cor Dekker, who became the first Norwegian to qualify for the European Tour, departed in the second round.

The PDC Nordic and Baltic tour will now face a five-month break with action resuming on August 23 in Iceland.

Waites and Turner the headline winners in the Isle of Man