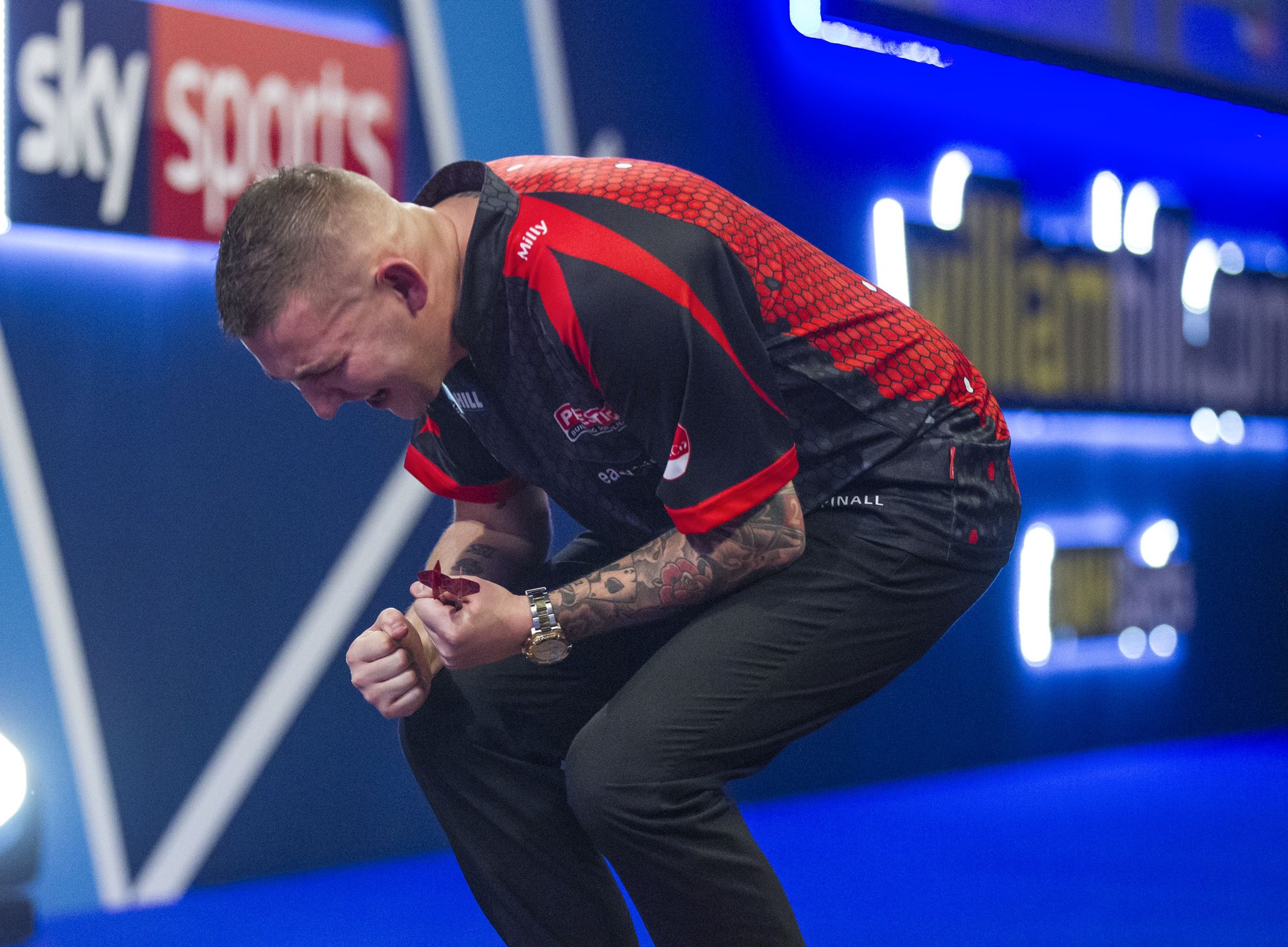 Nathan Aspinall produced a scintillating showing on his way to lifting a fourth PDC title and beating Gerwyn Price in the final of Players Championship Two at the Barnsley Metrodome.

It was yet another monumental moment in the short career of Aspinall – who was ranked beneath the world’s top 64 less than 18 months ago prior to back-to-back World Championship semi-final runs and his triumphant UK Open campaign.

His rapid rise reached its pinnacle on Thursday evening as the reigning major champion was victorious on his Unibet Premier League debut in Aberdeen.

It was a far from convincing performance from the 28-year-old on that particular occasion, however, he turned the tables in producing a sequence of high calibre displays to win his first title of the season.

‘The Asp’ recorded a top drawer tournament average of 102, though, his record-breaking quarter-final victory over Peter Wright gathered all the attention. Their combined match average of 115.59 was the highest since the introduction of the DartConnect system – with Aspinall also pinning a sought after nine-dart finish.

Following his victory over the reigning world champion, Aspinall defeated Gerwyn Price who his previous opponent overcame in the semi-finals of his landmark Alexandra Palace triumph. He averaged 101.3 and pinned eight of his 15 attempts on the outer ring to reign supreme.

Missed doubles proved catastrophic for Wales’ Price in the final, with the reigning Grand Slam of Darts champion squandering seven crucial opportunities throughout the contest.

Aspinall’s mid-match onslaught was essential in conquering a fearless Price, with four legs being reeled off in succession by the Stockport-based ace in a sublime spell which included 11 and 12 darters.

Aspinall, who lifted a career-saving title at the very same venue two years ago, trousered £10,000 in a successful campaign which commenced with a dominant display in thrashing Carl Wilkinson.

The 28-year-old was the first and last winner on a storm-struck afternoon in South Yorkshire, and subsequently defeated Peter Jacques, before beating Keegan Brown – who landed the fourth nine-darter of the weekend in the first round.

Aspinall, the current world number eight, then defeated an excellent Jason Lowe to seal his place in the quarter-finals. The West Midlands’ Lowe had beaten Dave Chisnall and John Henderson in previous rounds with ton-plus averages.

A mouth-watering quarter-final clash between two UK Open champions in Aspinall and Wright beckoned. It proved to be a ProTour classic, and despite the streaming cameras having opted to view another contest, Aspinall prevailed a 6-4 victor, averaging 117.5 – compared to Wright’s 113.7 – in a simply scintillating showing.

Is there anything that Peter Wright vs Nathan Aspinall clash didn’t have? #PC2

After being involved in a record-breaking last eight match, the Stockport man continued his invigorating vein of form in booking his place in Sunday’s showpiece. Germany’s Gabriel Clemens had ran out victorious against Stephen Bunting, James Wade and Jamie Hughes in Barnsley, though, failed to win a single leg in a 7-0 whitewash departure.

As for Price, his campaign got underway on rocky grounds. The Welshman survived nine match darts, after having led 3-0 in the first round against Spain’s Toni Alcinas.

Price, who will lock horns with Smith on Thursday as part of the Premier League in Nottingham, succeeded to produce his performance of the tournament in whitewashing Mickey Mansell, averaging 106.1 and eventually seeing off Dirk van Duijvenbode to clinch his place in Sunday’s final.

Elsewhere, Saturday’s champion Gary Anderson was handed a major blow early on as he was sent packing in the first round at the hands of former world champion Steve Beaton.

Anderson had defeated Jeff Smith in the first ranking tournament of the year, averaging a terrific 101.85 for the tournament. Canada’s Smith claimed substantial scalps once again on Sunday, overcoming Daryl Gurney and Danny Noppert.

The former BDO World Championship finalist was eventually beaten in the fourth round thanks to the Netherlands’ Dirk van Duijvenbode – who similar to Smith regained his tour card at the recent Qualifying School.

Van Duijvenbode entered unchartered territory later on in the tournament, reaching his first ever PDC semi-final, having defeated three-time world champion Glen Durrant in the third round.

Lisa Ashton became the first woman to win a match on the PDC ProTour as she averaged a notable 100.2 in defeating German youngster Christian Bunse. The four-time women’s world champion pinned two maximums and 60 per cent on her doubles, before losing out to Lithuania’s Darius Labanauskas in round two.

After his third round defeat to Brendan Dolan on Saturday, Michael van Gerwen’s hopes were scuppered relatively early on once again. Jamie Hughes did for the world number one on this occasion.

Sunday afternoon also capped a weekend of nine-darters galore at the Barnsley Metrodome. Mickey Mansell and Mike van Duijvenbode had both found perfection on Saturday, while Keegan Brown, Scott Baker and eventual champion Aspinall all matched the impressive feat around 24 hours later.

Rob Cross, who could have potentially faced Lisa Ashton in the second round, was ousted in round one by Lithuania’s Labanauskas, while Daryl Gurney, Dave Chisnall, Ian White and Poland’s Krzysztof Ratajski departed early doors.

Jose de Sousa, who pocketed two titles during his debut season on the circuit last year, provided evidence towards his undoubtable quality once again. The Portuguese thrower averaged 107.2 in his first round victory over Kim Huybrechts, before defeating both Wesley Harms and Adrian Lewis.

The Players Championship series will return next weekend with two more ranking events taking place at the Robin Park Leisure Centre in Wigan.

Kyle Anderson has opted to remain in Australia and therefore withdraw from the double-header, with PDC Challenge Tour table-topper Scott Mitchell being his replacement.