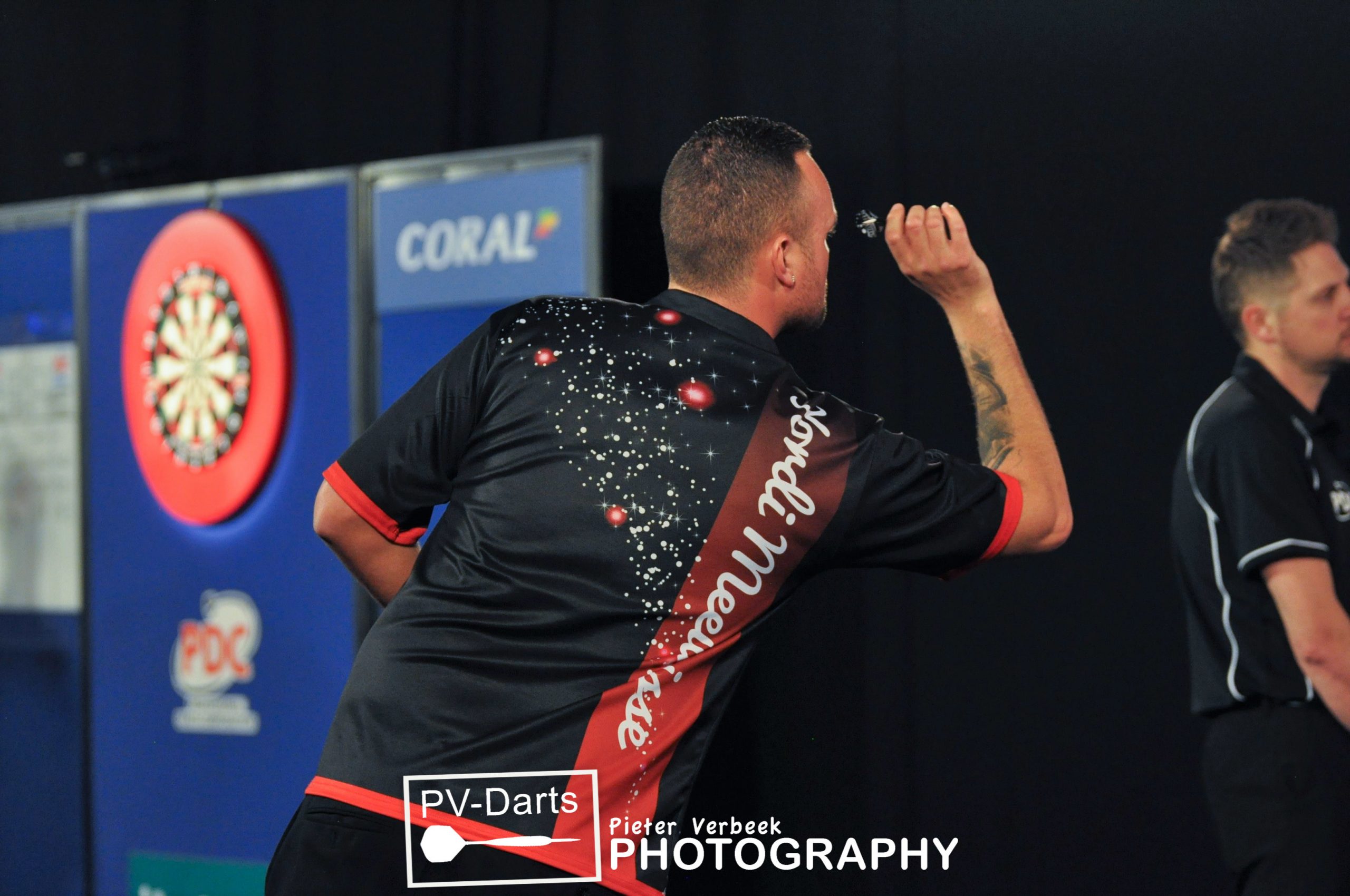 Yordi Meeuwisse kicked former World Championship winner Adrian Lewis out in the opening round in Munich while Chris Dobey and James Wade move through to round two.

Adrian Lewis will not be grabbing the jackpot of £25,000 in Munich as Dutchman Yordi Meeuwisse produces a stunning fightback to edge out the former European Tour winner in a last leg decider. Meeuwisse fired in three maximums and finishes of 116 and 112 as he averaged 94.92 and produced one of the biggest upsets in European Tour history.

Chris Dobey produced a finishing masterclass as he saw off fan-favourite Martin Schindler in front of a £2,500 German crowd. Dobey averaged just under 100 and survived a slight comeback from Schindler. Dobey led 5-1 in the tie before Schindler enhanced a comeback but ‘Hollywood’ pinned tops to setup a second round tie with Dungevan Enterprises teammate Michael Smith.

Stephen Bunting was the star performer of the first round as he averaged 101.33 and hit six out of his nine attempts at the outer ring. Bunting whitewashed European Tour debutant Christian Gœdl from Austria 6-0 to setup a second round encounter with Stoke-on-Trent based Ian White.

Darren Webster had a nightmare journey to Munich due to the fire at Stansted airport. Webster traveled with Adrian Lewis and got diverted to Manchester and got a flight to Austria before a two hour drive from Austria to Munich.

Elsewhere in Munich, Webster got there just in time to play Dutch opponent Jan Dekker. ‘The Demolition Man’ averaged just 91 but it was enough to see off ‘Double Dekker’ while Steve West and Ryan Meikle also had troubles travelling to Germany but managed to ease through to round two at the German Darts Grand Prix.

Luke Humphries averaged 99 last Friday in Leverkusen but suffered a first round defeat. This week was a different story for the Newbury-based thrower as he claimed his maiden European Tour victory with a 6-2 over William O’Connor while Max Hopp was the only host nation qualifier to get through the first round field. Hopp claimed his first European Tour win since Sindelfingen last May.

Dan Dawson and PDCTV commentary team all tipped Danny Noppert against Krzysztof Ratajski as the game of the first round in Munich but it was a woeful performance from both competitors.

The two BDO major winners faced off in the third game of the afternoon session, shown live on PDCTV for all subscribers. There were only two maximums converted in the encounter while 30 darts were missed at double in a sub-standard display in Munich. Ratajski averaged less than 80 in his worst performance on the European Tour as ‘Noppie’ snatched a 6-3 victory.

Nathan Aspinall averaged 102.15, which became the third highest first round losing average at a European Tour event, as he was beaten 6-4 by Irish youngster Steve Lennon. There were eight maximums hit in a terrific encounter as Steve Lennon setup a second round tie with last week’s winner in Leverkusen and number one seed Michael Van Gerwen.

Josh Payne fired in finishes of 146 and 160 as he edged out Austrian ace Michael Rasztovits 6-5 in a last leg decider. Payne averaged just 87 as he setup a second round encounter with last week’s finalist and six time European Tour winner Peter Wright while James Wade, Jonny Clayton, Toni Alcinas, Keegan Brown and former European Championship quarter-finalist secured their second round place in Munich.

Day two of the German Darts Grand Prix in Munich will continue at 12pm live on PDCTV as the 16 seeds come into the field. World Champion Rob Cross will be searching for his maiden European Tour title after beating beaten in the quarter-finals by Richard North last weekend in Leverkusen.