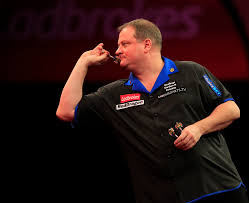 Andy Jenkins hit a 9-darter and finally went all the way to a Challenge Tour title after several promising runs already this year, while Berry van Peer continued his recovery from dartitis with a third PDC title, defeating Cameron Menzies in the final, who he played in that dramatic game at the 2017 Grand Slam of Darts.

Nick Fullwell and Cody Harris also won titles during a thrilling weekend at the East of England Showground in Peterborough as the races for the World Championship spot and for Tour Cards continued to hot up, with more than half of the Challenge Tour season now gone. Saturday’s action got underway with Event 9, and there were some eye-catching entries with three high-profile female players, several famous names of yesteryear and of course the main leaders at the top of the CT Order of Merit were all present.

Some of those stars, namely Ritchie Edhouse, Stephen Burton and Jesús Noguera, were all eliminated before the last 16 in the opening event of the weekend as the latter stages featured the likes of Boris Koltsov, Andrew Gilding, Steve Hine and Barry Lynn. However, it was Cody Harris who went on to take his second Challenge Tour title as he thrashed Wigan’s Martin Atkins 5-1 with his second 100+ average of the tournament.

The Kiwi thrower was on course to do a rare daily double, but lost out to Nick Fullwell in the semi-finals of Event 10, who went on to beat Nathan Rafferty 5-1 to claim his second Challenge Tour title. There were runs to the last eight for PDC ProTour finalist Scott Taylor and Lakeside quarter-finalist Kyle McKinstry. Sunday’s opening tournament saw a star-studded line-up at the business end which included Mark Frost, Rusty-Jake Rodriguez and the aforementioned Menzies, Van Peer and Jenkins.

Arjan Konterman beat Frost 5-4 to reach his second Challenge Tour semi-final of 2019, but lost out to countryman Van Peer in the last four. There were no such nerves for ‘Bionic’ in this meeting with Menzies as there were nearly two years ago in Wolverhampton as he closed out a superb 5-2 win to complete a fairytale, win Challenge Tour 11 and put himself right into contention for those big prizes mentioned earlier.

The final event of the weekend saw Colin Osborne roll back the years with a quarter-final run and two Austrians make an appearance at the same stage in Michael Rasztovits and Christian Gödl. Andy Jenkins, who hit a 9-darter in the very first event of the weekend, had already beaten the likes of Scott Taylor and Edhouse to reach the last eight, before he saw off Simon Preston, Justin Smith and Russian thrower Boris Koltsov to claim a first Challenge Tour title.

Those results see Stephen Burton retain a narrow lead at the top of the Order of Merit by virtue of the fact that he’s the only man to win two events in 2019. There are seven men who could overtake him with a title, though, while Koltsov currently sits in the second Tour Card spot. Legends of the game Kevin Painter and Richie Burnett are both outside the top 100 despite a handful of decent showings, while three-time Women’s World Champion Lisa Ashton has chalked up £150 so far.

The Challenge Tour heads to the Aldersley Leisure Village near Wolverhampton for Events 13-16 during the second weekend of August.

Double delight for Wright in Barnsley