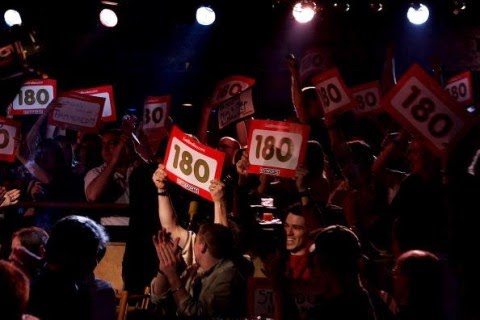 “I’m a little nervous, but once the darts start flying my preparation will show and I’m hoping to make a good run,” were the words of Danny Baggish – who sealed qualification for the World Masters after winning the Cherry Bomb International in Florida earlier this year.

He traveled across the globe in order to make his major debut, hoping to construct his second televised appearance after winning the prestigious North American Darts Championship in Las Vegas.

Baggish’s name wasn’t involved in the draw after it was released last Monday afternoon, a draw that contained multiple mistakes, embraced name duplications, withdrawn players and players who had qualified and registered were missing.

The 36-year-old had undergone a 4,386-mile trip from Florida to London in order to make his major darting debut, and with his name not being present in the draw and no prize money listings being available, it wouldn’t have been a substantial surprise if he was feeling deflated at a time he should have been ecstatic.

Baggish aside, Scott Baker was among the notable names in the draw despite having won a PDC tour card in January – which impedes him from playing in televised events held by other organisations.

There were competitors up and down the country and internationally traveling to Gray’s Civic Hall as the World Masters commenced without not only any idea as to who they were playing, but also what they were playing for.

It was confirmed early on Wednesday afternoon that those participating would receive free entry to watch the staged finals, held at the Circus Tavern, though, still no mention of a desirable prize fund. A laughable occasion had progressed to a beyond farcical status.

Players were then informed upon arriving to the venue in Essex that a re-draw would be imminent and that the tournament would commence an hour later than originally publicised. This came slightly after BDO chairman, Des Jacklin, had confirmed that a number of participants had not registered prior to traveling across the world.

However, blame cannot be solely placed on the players in question. A number of participants who had traveled overseas had registered and were still not involved in the draw, so both parties can and should be held accountable.

It also emerged that players were forced to sign a written contract stating they will not compete in December’s PDC World Championship should they qualify for either the World Masters or BDO World Championship.

Failure to comply would make them ineligible to receive prize money from the World Masters and could also result in court action. As a result, having already qualified for the PDC World Championship, Slovenia’s Benjamin Pratnemer could potentially lose his World Masters winnings, which lies dependent on whether or not he signed the contract.

The current longest running professional tournament, the second most prestigious on the BDO calendar and it’s being orchestrated like a ranked open. The recent Northern Cyprus Open had received more concern.

A diminished prize fund was eventually announced. It was made known courtesy of the venue’s tannoy system around ten minutes before play got underway.

It wasn’t all doom and gloom as the tournament progressed to the televised stages – which were broadcasted live on Eurosport. The hindmost rounds played out smoothly, thanks to the excellent production from the pan-European sports network.

Nine of the BDO’s top 16 prevailed through to the televised stages. Would the viewing figures have been of a larger proportion if those seven who missed out were involved? Arguably, yes.

Former World Championship finalist Andy Hamilton, who in fact was not inside the seeded positions, made his feelings known, releasing a social media statement following a disastrous experience.

“The players should know exactly how they qualify for an event, and when a qualifier is held, it shouldn’t be completely open to all,” stated Hamilton who was defeated by Keith Geraghty in the third round.

“There are many players that dedicate a lot of time, effort and money to play on the BDO Tour, who then arrive at a qualifier where someone who hasn’t played a single BDO event all year can enter and qualify to play in the major.

“I have nothing against the players who do this, but the board should not be allowing it to happen, these majors are realistically the only events where good prize money can be won, and non-tour players are able to come in and take it.”

Cork’s John O’Shea reigned a deserved winner as did Lisa Ashton in the ladies’ event, however, the famous, rather stupendous trophy was absent in the presentation and was replaced by a disparaged glass honour.

It was suggested that the prestigious trophy was of Winmau ownership, though, that was not the case after confirmation from the leading manufacturer. Winmau’s name would have been emblazoned on its nucleus after their tenure as sponsors, but surely an elementary remove and replace job could have transpired.

If you were situated in O’Shea’s shoes now you would be extremely disappointed not to have the famous trophy nestled on your mantelpiece.

O’Shea will undoubtably be on top of the world after winning his maiden major crown, but possibly not as much as Cliff Inglis was back in 1974 when he lifted the inaugural edition. The World Masters is unfortunately not what it once was.