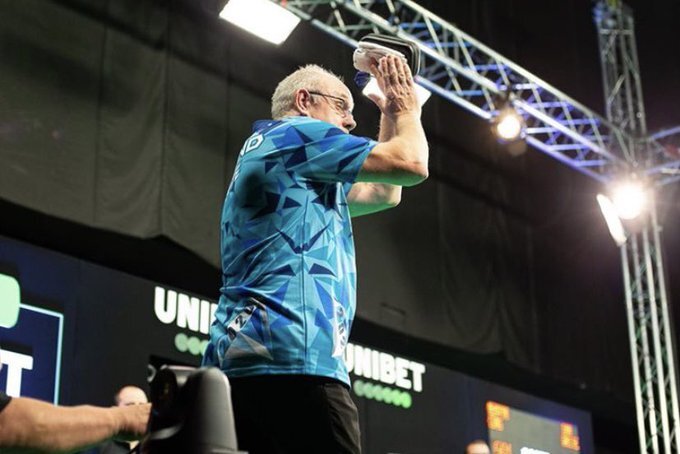 Michael van Gerwen was defeated before the quarter-finals of the European Championship for a third successive year as Ian White averaged more than 103 to beat the world number one.

Van Gerwen won four European titles in a row between 2014 and 2017, and his wait for a fifth will be extended, with ‘Diamond’ producing some of the best darts we’ve seen from him for several months.

White got off to a flying start, winning all of the first five legs in just 70 darts. ‘Mighty Mike’ wasn’t playing too badly, and got four legs on the board but could do nothing to stop Stoke’s White, and the three-time European Tour event winner wrapped it up 10-4.

It was a thrilling evening session in Oberhausen, and the big clash between Peter Wright and Gerwyn Price certainly didn’t disappoint.

The Welshman pinned consecutive 12-darters in the opening stages, but that was overshadowed by an incredible second session as the World Champion took four of the five legs averaging over 120.

That put him 7-3 ahead, and despite a slight drop in standard from there and a mini comeback from Price, Wright finished it off 10-6 to continue his bid for a first European Championship title.

Dirk van Duijvenbode continued his dream run of from with an impressive 10-8 victory over Michael Smith after recovering from ‘Bully Boy’ winning six straight legs in the middle of the match.

Smith also led 8-6, but the Dutchman turned it on to win all of the last four legs and set up a quarter-final with Jonny Clayton.

Clayton overcame Thursday’s nine-dart hero José de Sousa 10-6, averaging 98, but his finishing was the most impressive aspect of the performance at 59 percent.

West led 7-3, and after the Austrian pulled it back to get within one, the pace of the game notably slowed down and it became a bit of a struggle.

’The Gentle’ left himself on tops after 15 darts to win the decider, but West took out 106 for a big win in the context of his career.

German Darts Championship winner Devon Petersen produced one of the performances of the day, averaging 101 to see off debutant Martijn Kleermaker in a fantastic game.

The South African did well to recover from losing the first three legs to set up a high-quality middle portion of the contest, which was capped off by an 11-darter from Petersen for him to go within one at 9-7.

He didn’t show any sign of nerves and took it 10-8 to book a first televised ranking quarter-final since the UK Open of five years ago.

James Wade managed to stay just ahead of Nathan Aspinall in a meeting between two top 10 players. ‘The Asp’ was made to rue 19 missed doubles as Wade kept his hopes alive of a second European title.

William O’Connor took advantage of a below-par Jamie Hughes to ease past the Tipton thrower 10-3 and set up a meeting with Wade.

The four quarter-final matches will take place on Saturday evening, with the semi-finals and final subsequently being played out on Sunday.