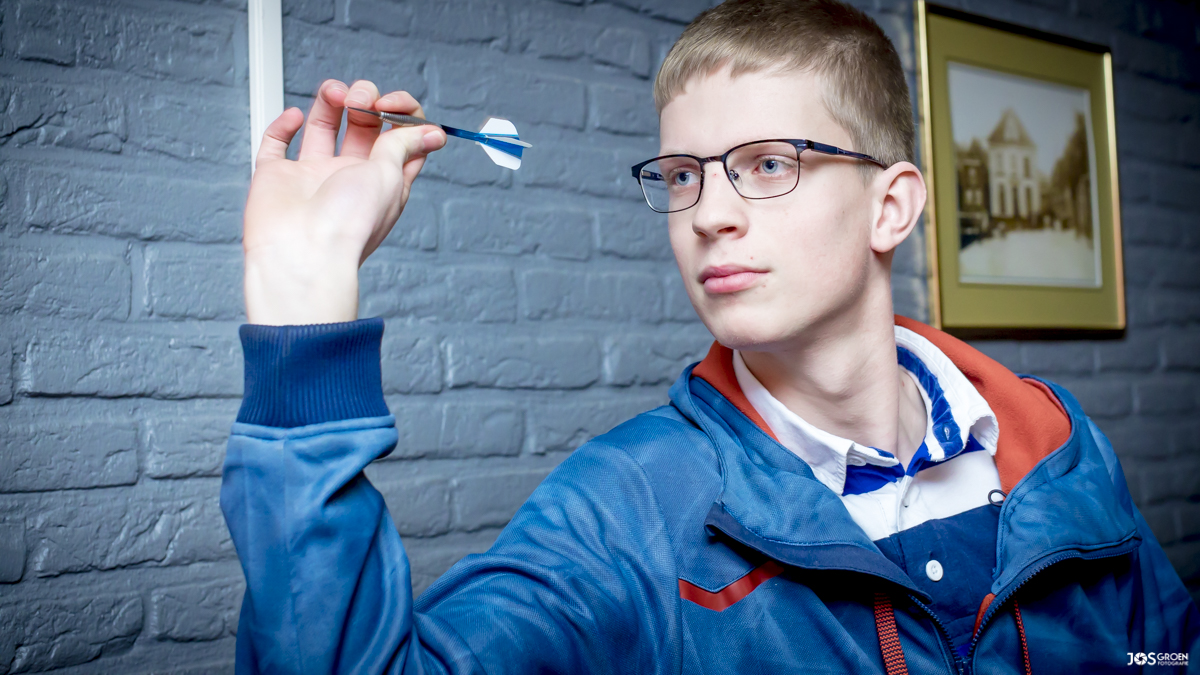 Patrick Bus: ‘I will have to bring my best game to Assen’

“It will be very hard to get far in the tournament. The further you get, the better your opponent becomes. It is a matter of getting and taking your opportunities. If you do that, you can go far.”

That’s the attitude of 18-year-old Patrick Bus: A young Dutchman based in the small village of Oudega just a short drive from Assen where he’ll make his Dutch Open debut on Saturday.

“I started playing darts in 2012,” said Bus – in an exclusive interview with dartsplanet.tv – as he recollected the first time he took to the oche. “I saw the World Grand Prix final between Michael van Gerwen and Mervyn King and I thought I would like to do that too. On my birthday at the end of 2012, I received a dartboard with darts as a present. At the end of 2014, I started playing tournaments. I feel that I am getting better every year.”

Just 12 months ago, young Bus finished third in the youth event in Assen, loosing out to Keanu van Velzen in the semi-finals, after already seeing off some exceptional talents in Ramon Leferink, Danny de Graaf and Levy Frauenfelder, but this weekend Bus joins the big time as he throws alongside another 3,357 men for the €5,000 winner’s prize fund.

Click here for more information on this weekend’s Dutch Open

“During my first two editions of the youth Dutch Open, I didn’t win a match. In 2017, I won the first round against Mattias Flodin, but then lost to Danny Jansen after a 2-0 lead. In 2018, I managed to reach the semi-finals. I know that this year it will be even tougher to get far in the Dutch Open. The Dutch Open is the toughest darts tournament that there is in the world. You will have to play very well every game, otherwise you won’t win. If I take my good form to Assen there is a chance that I can go far.”

As aforementioned, ‘The Comeback’ reached the semi-finals of the Dutch Open’s youth competition 12 months ago in Assen, losing out to eventual winner Keanu van Velzen, the 18-year-old added: “I was very happy with this achievement, because I never expected to get that far. That was the best achievement in my career so far. I think it will be very difficult to reach a semi-final again in the men’s competition. I am going to do my best and see how far I can get.”

Two-time defending champion, Mark McGeeney, will not be involved after clinching his PDC tour card in Wigan earlier in January, neither will reigning Lakeside champion Glen Durrant, Jim Williams or Scott Waites.

However, four-time Dutch Open champion Martin Adams will be in attendance, and that’s who 18-year-old Bus could potentially take on if he is to get through the opening round in Assen.

When asked about the chance of playing the legendary Martin Adams in his home country, the Dutchman added: “It would be a dream come true. Adams is one of my idols, he has won Lakeside three times and even a four-time Dutch Open champion. In addition, I see opportunities to make it difficult for him. I will have to bring my best game to Assen.”

Bob van Oerle will have something to say about that, though, with Bus’ compatriot being his first round opponent. “I don’t know him [Bob van Oerle]. So, I don’t know what to expect from him,” said Bus. “That is why I will have to start sharply and not underestimate him.”

The 47th showing of the Dutch Open will commence on Friday with the pair’s events, before Patrick Bus’ campaign kicks-off on Saturday with the men’s singles.