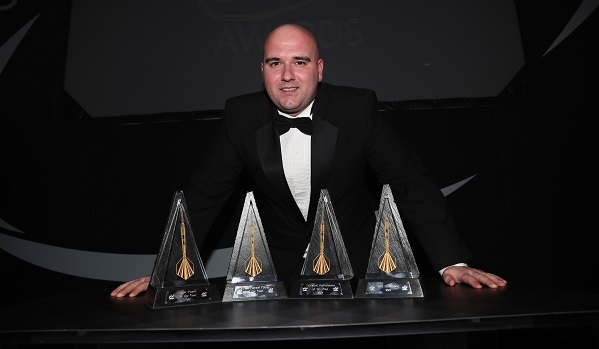 PDC Awards Dinner: Quadruple for Voltage while MvG gets player of the year

Rob Cross won four awards on Monday evening in London after a sensational start to life in the PDC. ‘Voltage’ appeared in the UK Open in February loosing out to the eventual winner Peter Wright before reaching the final of two European Tour events and winning four Players Championship events and topping the order of merit.

The Hastings-based ace reached the final of the European Championship loosing out to Michael Van Gerwen once again but got revenge of the world number one at the World Championship, which he was awarded with the ‘Preformace of the Year’ award. Cross then went onto win the William Hill World Darts Championship at first attempt in his first year as a professional darts player.

“It’s amazing to get four awards,” said Cross. “This time I was practising and I knew I had a big year coming up but I progressed nicely and you couldn’t have scripted it.

“I’ve still got to get used to being World Champion, but in my eyes I’m still learning and I feel I can get better.

“To get the Players’ Player of the Year award is unreal, and to get this reaction from the fans too is fantastic.”

Despite, ‘Voltage’ taking the majority of the awards at the Dorchester Hotel, Michael Van Gerwen was given the Player of the Year once again. The decision caused a huge stir on all social media platforms but for me it was a coin flip between Michael Van Gerwen and Rob Cross, and ‘Mighty Mike’ came out on top this time around.

Van Gerwen took the biggest award at the Awards Ceremony in London for the third successive year after winning The Masters, Betway Premier League, World Series of Darts, Grand Slam of Darts, European Championship and the Players Championship Finals in Minehead in another outstanding year on the PDC circuit.

Peter Wright won three UK Open qualifiers, five European Tour events and just the one Players Championship event in Milton Keynes and courtesy of this was given the ‘Pro Tour Player of the Year’ award. Wright’s stand out performance on the Pro Tour this year has to be at the European Darts Grand Prix, where ‘Snakebite’ whitewashed Michael Van Gerwen 6-0 in the final.

Dimitri Van den Bergh was awarded with the ‘Young Player of the Year’ award following his World Youth Championship success and a brilliant year on the Unicorn Development Tour. Van den Bergh lifting the World Youth Championship in November, beating Josh Payne 6-3 in the final before reaching the semi-final after a superb performance at the William Hill World Darts Championship. ‘The Dream Maker’ was unable to recieve the award at the dinner due to him currently playing in the Pro Darts Showdown Series in Australia and New Zealand.

Sky Sports presenter Dave Clark was inducted into PDC’s Hall of Fame joining the likes of Sid Waddell, Phil Taylor and Dennis Priestly. Clark was recognised for being part of the sport on television for 15 years and for his charity work for Parkinson’s UK.

All PDC competitors who completed the perfect nine-dart leg on the tour this year received a silver pin badge while Kyle Anderson and Adrian Lewis were awarded with a gold pin badge for hitting a perfect leg on television.