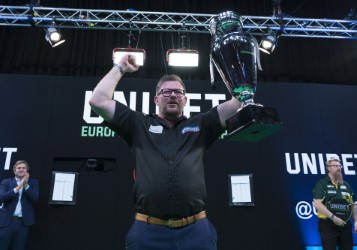 The Unibet European Championship kicks off in Gottingen, Germany this evening, with some stand out first round ties on offer over the next two days.

Other stand out opening round ties include a clash of former champions, as Adrian Lewis and Simon Whitlock look to arrest their recent slides in form. The tournament kicks off with Joe Cullen taking on Mervyn King it what should be a cracker.

Michael van Gerwen, fresh from his Champions League victory in Leicester last weekend, meets Ross Smith in the penultimate match of the night on Thursday.

His second round opponent could well be form horse, Glen Durrant, who faces Ricky Evans in his first round outing.

Round two kicks off with four matches on Friday night, with the last 16 concluding on Saturday evening. The quarters, semis and final will all be played to a finish on a marathon Sunday session.