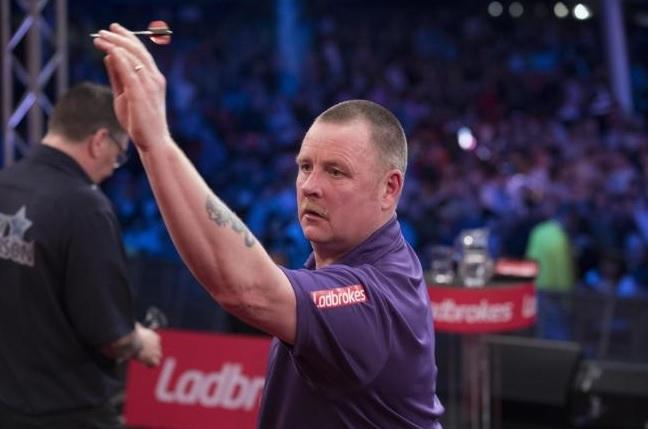 Alan Tabern finished ahead of Mike van Duivenbode on head-to-head to win Group 11 of the PDC Home Tour, with Kirk Shepherd and Simon Whitlock also likely to be counting themselves unlucky.

With all four players collecting a win from the first two rounds of matches, Van Duivenbode’s win over Shepherd ended the former World Championship finalist’s hopes despite his superior leg difference.

It meant any of the other three players could still win the group going into the final game, and after a topsy-turvy match, Tabern beat Whitlock in the decider to progress to the second stage.

The tournament’s 11th group got underway with a clash between former European champion Whitlock and Dutch youngster Van Duivenbode, and the Dordrecht man got off to a flying start with two 13-darters in the first three legs and converted that into a 5-3 win despite a spirited comeback from the Australian.

It was a very handy performance, but that was blown out of the water by Shepherd, who only dropped one leg against Tabern to move to the top of the group, hitting an 11-darter and a 12-darter on route.

St. Helens thrower Tabern produced a much better display in his second match, seeing off Van Duivenbode 5-2 with a 97.6 average and 42% on the doubles.

It turned out to be the crucial result in the final reckoning, but if Shepherd had won one more leg in his game with Whitlock, it would have been ‘The Karate Kid’ with reason to celebrate at the end of the evening.

‘The Wizard’ stormed into a 3-0 lead, only for Shepherd to win four of the next five legs to level up. However, Whitlock was undeterred and found a 16-darter to keep his hopes of progression alive.

Development Tour event winner Van Duivenbode did the same in the penultimate contest, winning the last three legs against Shepherd to move to four points.

Despite his impressive record, the only scoreline in the final game that would see him progress would be a 5-4 win for Whitlock.

It was nip and tuck all the way, with the first six legs all being breaks of throw, but Tabern found the illusive first hold and eventually got over the line in a decider to finish top of a dramatic Group 11.

The PDC Home Tour continues on Monday evening with Keegan Brown taking a break from his work for the NHS to play in a group with Max Hopp, Conan Whitehead and Mike De Decker.

Confirmation of the final table with Alan Tabern taking victory on his head-to-head with Mike van Duivenbode!

A 5-2 victory earlier in the night means that Tabern tops the table in Group 11! pic.twitter.com/nsHaR24OP5