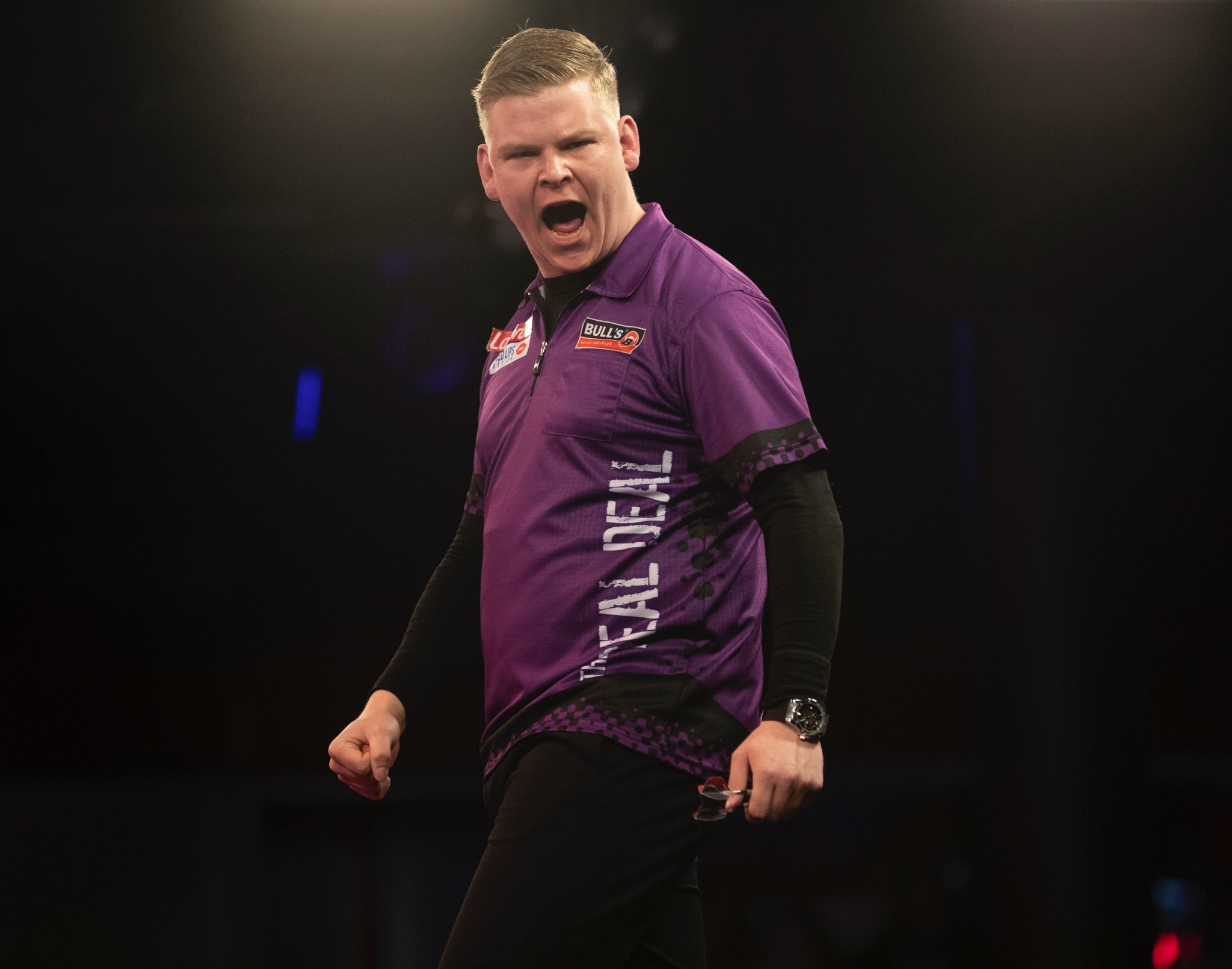 De Decker, who has emerged as a prominent figure across a number of remotely contested tournaments throughout the lockdown period, denied Bunting on leg difference to prevail on the second evening of the Play-Offs.

After being narrowly defeated by the 2015 BDO world champion in his opener, the four-time PDC Development Tour event winner saw off both Durrant and veteran Alan Tabern to keep his hopes of progressing alive.

His place in the semi-finals was later confirmed following a clinical performance from Tabern in thrashing Bunting in the evening’s culminating contest.

Former Premier League star Bunting and eventual table-topper De Decker got the evening on the road, with the St Helens man running out a narrow victor with an impressive 101.28 average.

Whilst pinning two ton-plus checkouts in the process, Bunting bursted into a 5-2 lead, only for the Mechelen-based ace to reel off three legs in succession, including a ton-plus outshot of his own, to force a decider.

The four-time major champion held the advantage of throwing first in the all-important leg, and utilised that to perfection, pinning a 14-darter on double six to get off the mark.

Ahead of Group Two commencing, one would assume that either Bunting or Durrant would progress, and that statement was seemingly even more correct as ‘Duzza’ got his campaign underway in fantastic fashion.

Similar to Bunting, the Middlesborough man recorded a 104.20 average in his opener as he overcame a valiant Tabern, with four maximums and 50 per cent in the doubling department.

Both players broke and held throw in the first four legs with scores locked at two-a-piece, before ‘Duzza’ began to plug away, reeling off three of the next four legs prior to pinning an 11-darter to seal his only victory of the night.

Tabern remained in place for the evening’s third tussle with both he and De Decker aiming to keep their hopes of topping the table alive.

De Decker produced an inspired comeback, battling back from three legs adrift whilst clocking a 98.48 average and six out of the nine on the outer ring.

From 5-2 down, Mike De Decker produces an excellent comeback to defeat Alan Tabern 6-5!

A rampant Bunting subsequently registered his second ton-plus average of the night as he fought back from behind to see off Durrant in the battle of former world champions.

Durrant constructed an early 2-0 advantage courtesy of pinpoint precision on the doubles, only for ‘The Bullet’ to claim sixth of the next seven legs and continue his scintillating vein of form.

After being dealt a massive blow at the hands of his good friend Bunting, Durrant’s hopes subsequently vanished into thin air as De Decker claimed the scalp of the three-time world champion.

De Decker raced out of the gates and into a 3-1 lead, only for the Premier League leader to break back and level proceedings at four-a-piece. The Belgian youngster then broke throw once again whilst pinning two maximums, before sealing the deal with a 14-darter.

Mike De Decker keeps his Semi-Final hopes alive as he closes out a 6-4 win over Glen Durrant! He's now relying on Alan Tabern to beat Stephen Bunting in the final game of the night…

The 24-year-old’s hopes of topping the group lied in the balance heading into the concluding collision of the night, with Tabern facing Bunting despite his fate already being decided.

The all-St Helens clash saw Tabern dominate throughout and Bunting fail to reach the heights he had previously achieved earlier on in Wednesday evening’s session.

‘The Saint’ produced a finishing masterclass, converting a mesmerising 160 checkout en route to handing his Belgian counterpart De Decker a place in the third phase.

Alan Tabern comes out on top in the all St. Helens clash, defeating Stephen Bunting 6-2, denying 'The Bullet' a spot in the Semi-Finals!

That result means Mike De Decker tops the table and advances to the Semi-Finals of the Low6 Home Tour Play-Offs! pic.twitter.com/eikXCMgG0l

The PDC Home Tour Play-Offs resume on Thursday evening as Gary Anderson returns to the fray alongside a trio hoping to topple the two-time world champion.

Reigning world youth champion Luke Humphries joins the broadcast from Berkshire alongside Welsh duo Jamie Lewis and Nick Kenny – who has entitled Anderson as his idol.

Here's how the table ended on Night Two of the @low6bet Play-Offs, with Mike De Decker edging things on leg difference!#Low6Playoffs pic.twitter.com/05TpHWZyGc

Modus Icons of Darts: Adams does the double as Phase Two resumes