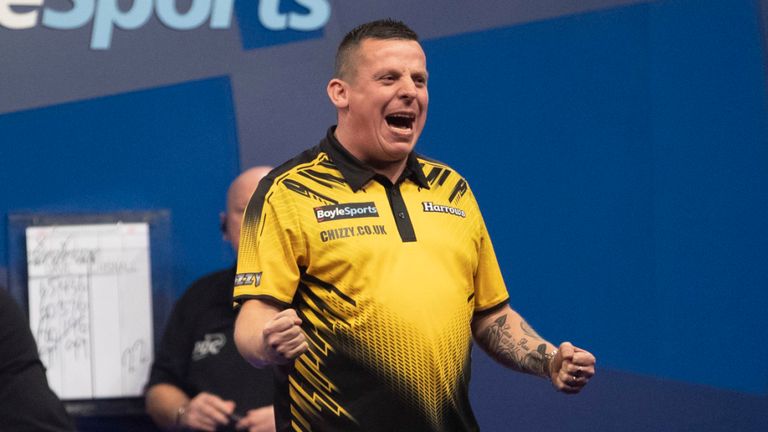 Dave Chisnall came out on top in a vital game against Geert Nentjes to finish 1st on Night Four of the PDC Home Tour Play-Offs and qualify for the semi-finals.

‘Chizzy’ suffered an early blow with a 6-5 defeat to Damon Heta, but recovered with 6-2 and 6-3 wins to finish ahead of Nentjes on leg difference after the Dutchman won his opening two games despite having to survive match darts in both of them.

Heta led 3-1 and 5-2 in the opener, but former Lakeside finalist Chisnall reeled off three straight legs to send it all the way. However, Heta broke superbly with a 12-darter after the Morecambe thrower had missed a dart for a 124 checkout.

The evening’s second contest followed an incredibly similar pattern as lower ranked Nentjes opened up a 4-2 advantage and Darren Webster came back to lead 5-4, only to squander a match dart in the decider and allow Nentjes to clean up for a 6-5 win.

A third consecutive match went all 11 legs as Australia’s Heta came from 4-0 down to level at 5-5 with Nentjes, but once again, the player throwing first in the final leg missed darts for the match and his opponent went out.

Two wins out of two for the Dutchman courtesy of a clutch 90 finish on the bull.

World number 11 Chisnall needed two big wins to keep alive his hopes of winning the title in a week’s time, and did the first part by beating Webster 6-2 with a 95 average and 4 180s.

Norfolk man Webster did manage to avoid finishing bottom after beating Heta 6-2, a 125 checkout in the third leg the highlight, but all eyes were on the final game of the night between Chisnall and Nentjes to decide who would finish top.

‘Chizzy’ produced some excellent visits to win the first two legs in 25 darts, but slacked off in leg three, missing handfuls of darts at doubles.

However, he somehow got over the line in that leg and then threw six perfect darts in the next on his way to a 4-0 lead. Nentjes did manage three legs, but a 106 checkout sealed a 6-3 win for Chisnall.

The two-time World Grand Prix runner-up will join Jelle Klaasen, Mike De Decker and Gary Anderson in the first of the semi-final groups on Wednesday.

Before then, the last 32 continues on Saturday evening with nine-dart hero Luke Woodhouse being joined by Rob Cross, Ryan Searle and Daniel Larsson.