Glen Durrant reigned victorious in Group 19 on the innovative PDC Home Tour as he became the second Premier League star to progress to the second phase.

Nevertheless, there were no problems for three-time world champion Durrant as he prevailed without defeat, maintaining his 100 per cent record in a scintillating string of performances.

After producing mesmerising displays in wins over both Vincent van der Meer and good friend Justin Pipe, ‘Duzza’ needed four legs in his final match against Dutchman Maik Kuivenhoven and accomplished what was required with relative ease.

“You are always the best player in your own bedroom, so we will see,” Durrant had told Dan Dawson earlier in the night.

He later added: “I’ve tried this online darts over the past couple of weeks and it’s not been for me, but I practice for two hours every night and I’ve thoroughly enjoyed it.”

It was eventual table-topper Durrant who got proceedings underway on Tuesday evening as he emphatically brushed aside Dutchman van der Meer.

The Middlesborough man completed all five of his legs in 16 darts or less, registering an impressive 101.79 average and pinned five out of his seven attempts on the doubles.

Somerset’s Pipe then entered the fray and emulated Durrant’s doubling excellence in his 5-1 win over Kuivenhoven.

In the third match of the evening, two-time PDC ranking event quarter-finalist Kuivenhoven continued the streak of one-sided victories as he thrashed van der Meer.

Durrant and Pipe then locked horns in arguably the most entertaining encounter on the Home Tour so far, as the pair threw banter up the down the country during a closely contested clash.

After the first two legs were shared, the Premier League leader held throw with a 13-darter utilising top of the shop, before proceeding to burst his opponent’s eardrums with a vivacious roar following the execution of an exceptional 164 outshot.

What a steal from Glen Durrant!

A 164 checkout with Pipe having missed the bullseye for the 127!#UnibetHomeTour pic.twitter.com/JPosRFcuLu

Another bellow followed from Durrant as he fired home his first maximum en route to extending his lead and moving on the brink of victory.

Despite the two-time PDC ranking event winner seemingly coasting to victory, Clevedon-born Pipe rattled off the next two legs to move within touching distance, only for Durrant to close out a narrow win with a 97 checkout.

Subsequently, Pipe kept his aspirations of clinching top spot alive, pinning five of six attempts on the outer ring in a comfortable win over a below-par van der Meer.

The former Austrian Darts Open champion’s hopes were short-lived, however, as Durrant secured his place at the top of the pile with another doubling masterclass and his second ton-plus average of the evening.

31-year-old Kuivenhoven started beautifully as he kicked off with a magnificent 11-darter, before Durrant instantly responded to level proceedings at one-a-piece.

The Dutchman regained his lead, and was well-placed to double his advantage, only for the Middlesborough man to convert a spellbinding 110 checkout and reinstate the match’s stalemate status.

From there, it was nigh on plain-sailing for the three-time BDO world champion as he won three of the next four legs to prevail.

It's three wins from three from Glen Durrant to top the group on Night 19 of the Unibet Home Tour, and he's played some excellent stuff!#UnibetHomeTour pic.twitter.com/GDE34MplRy

The PDC Home Tour resumes on Wednesday evening as Joe Cullen headlines the 20th night of the remotely contested extravaganza.

Jermaine Wattimena also joins the broadcast from Westervoort in the Netherlands, as well as Greece’s John Michael and Scotland’s Ryan Murray.

Jeffrey de Zwaan was originally scheduled to compete, though, the former World Matchplay semi-finalist was forced to withdraw due to an ongoing shoulder injury. 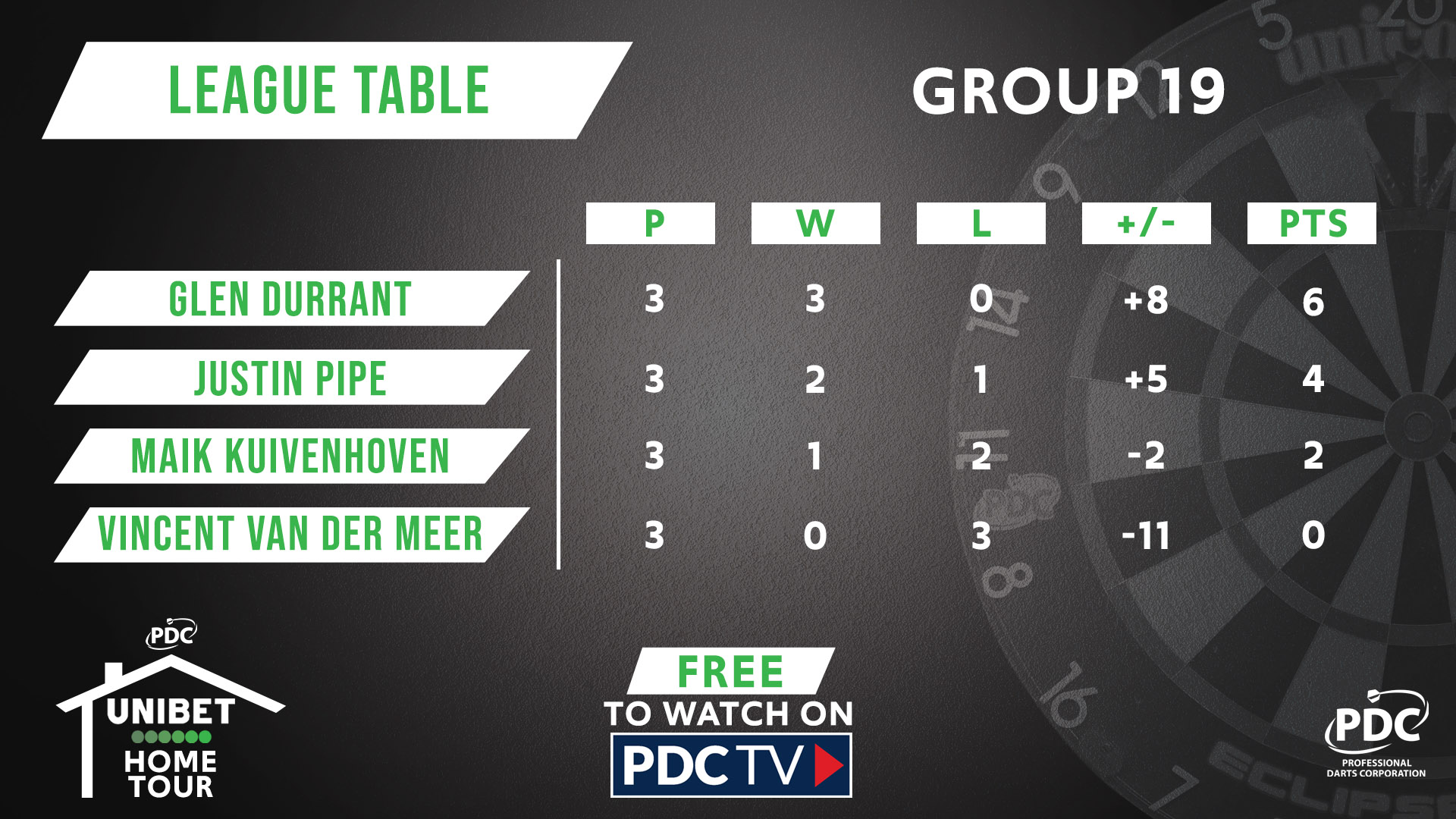 Cross, Ratajski and White to feature in Groups 21-24 on the PDC Home Tour