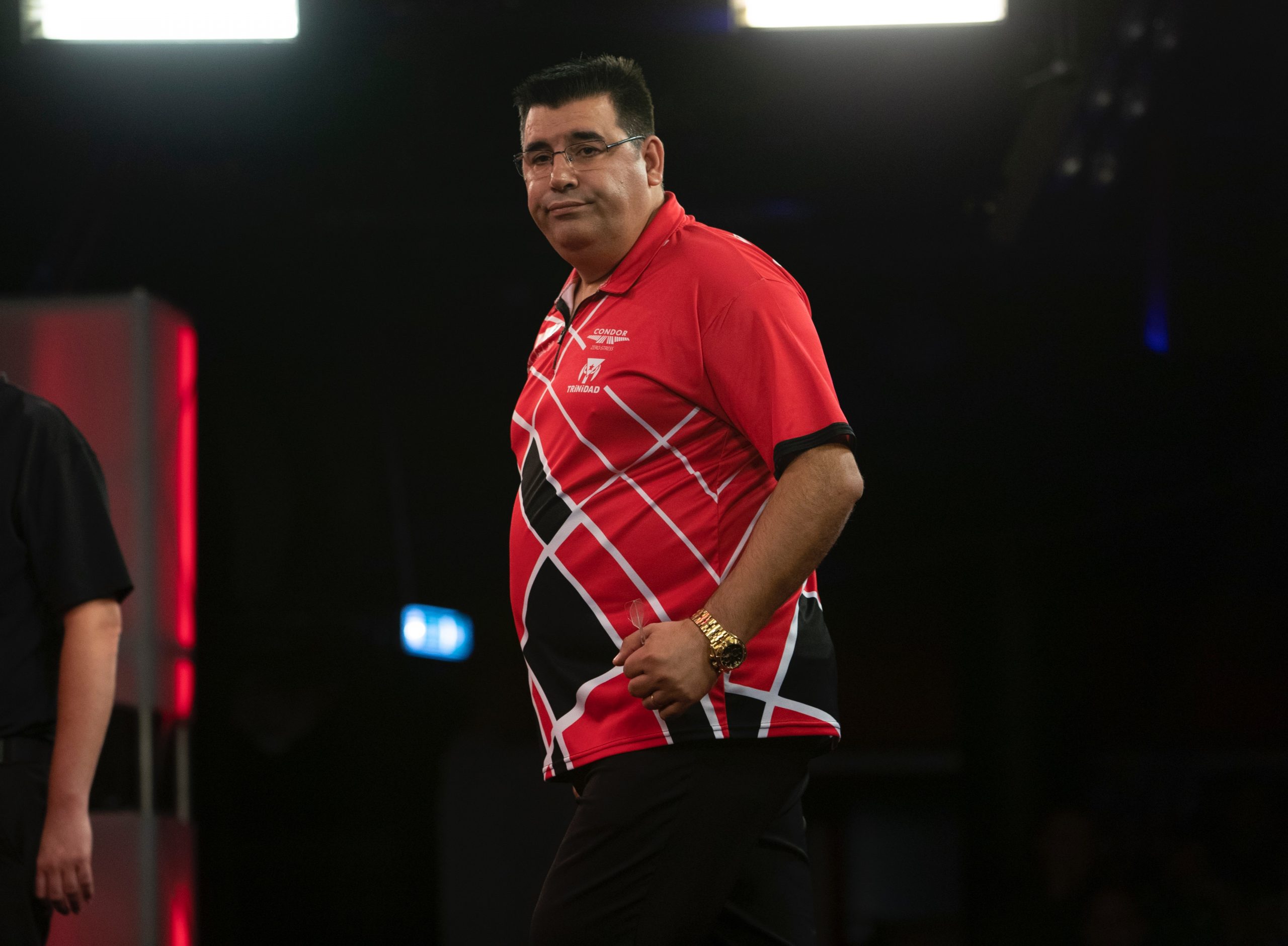 Portugal’s Jose de Sousa produced an irresistible standard as he romped to Group 25 success, dropping just a solitary leg during a scintillating string of showings.

He convincingly overcame both Gerwyn Price and Glen Durrant to win those aforementioned titles, and, despite not facing any players within the top echelons of the sport, continued to register astronomical numbers on Monday evening.

Nicknamed ‘The Special One’, de Sousa’s borrowed sobriquet proved rather apt as he produced the greatest series of showings witnessed thus far on the Home Tour, averaging 104.97 for the night and topping the previous best of Ryan Searle.

Having whitewashed both Robert Thornton and NHS key worker Keegan Brown, Madrid-based de Sousa needed a mere two legs to top the pile and completed what was needed with flying colours. 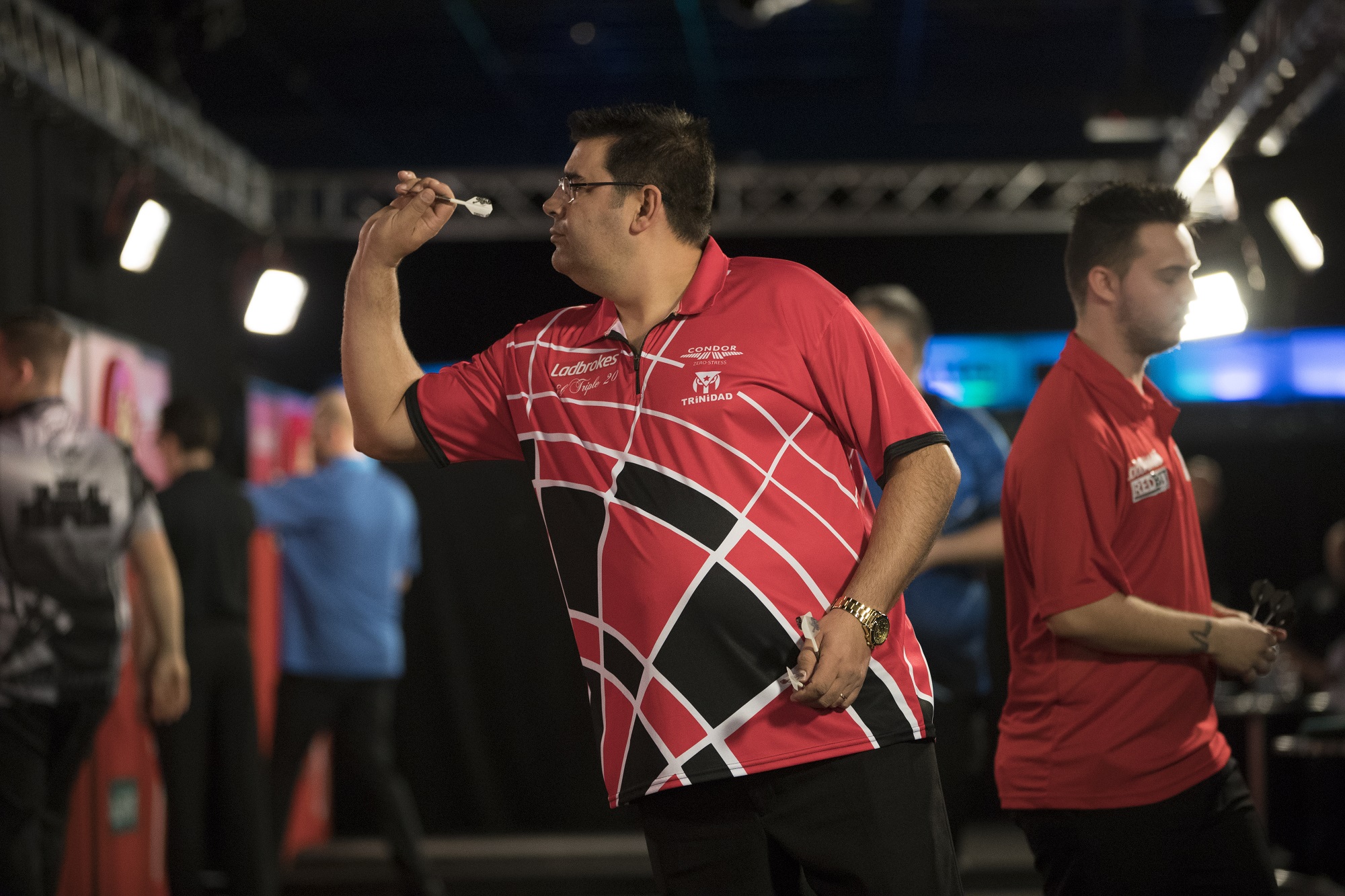 De Sousa, 46, said: “It was really fantastic. All the players are good players, everyone knows it’s very difficult when you play like this.

“I don’t care about the average, I just played to win my legs. The big average helps though,” he smiled.

“I’ll keep going with my practice every day, with friends and sometimes alone. I’m staying at home so can’t do anything more.”

Brown, who has handed a second bite at the cherry following connection issues two weeks ago, and former World Youth Masters winner Robinson collided in the opening match of the night, with the Isle of Wight laboratory assistant running out victorious.

Brown raced out of the gates and into an early 4-1 lead with a 109 checkout, only for his former youth rival to reel off three legs in succession and force a decider.

Robinson experienced missed doubles aplenty in the deciding leg, and it was Brown who prevailed, pinning double ten much to his own disbelief.

De Sousa, the greatest player ever to arise from Portugal, then entered the fray in scintillating style, recording a remarkable 110.51 average in a whitewash win over multiple-time major champion Thornton.

The two-time PDC ranking event winner rallied to victory with a 63 per cent checkout efficiency, three maximums and a terrific 132 checkout on the bullseye in the final leg.

A 109.5 average from Jose De Sousa as he whitewashes Robert Thornton 5-0!

Subsequently, Scotland’s Thornton was on the end of yet another inhuman performance – this time from Robinson. The 27-year-old fired home an extraordinary 110.80 average and checkouts of 50, 52, 81, 100 and 121 in a finishing masterclass.

Thornton, himself, registered a superb 104.69 average and outshots of 98 and 100 despite his hopes of progressing to the second phase being scuppered after successive defeats.

In the fourth match of the evening, Portugal’s de Sousa returned and extended his run without dropping a single leg to ten as he completed another whitewash win.

His opponent, Brown, was left stunned as the 46-year-old strutted his stuff, registering a 97.60 average as he moved within touching distance of clinching top spot.

Jose De Sousa averages 108 as he beats Reece Robinson 5-1 to win the group on Night 25.

De Sousa remained in place for the night’s penultimate contest, thrashing Robinson with a magnificent average of 106.79 to secure his place at the pinnacle of the pile.

Brown then denied Thornton with a 98.05 average in the culminating match of the evening despite neither having the capability of topping the group. 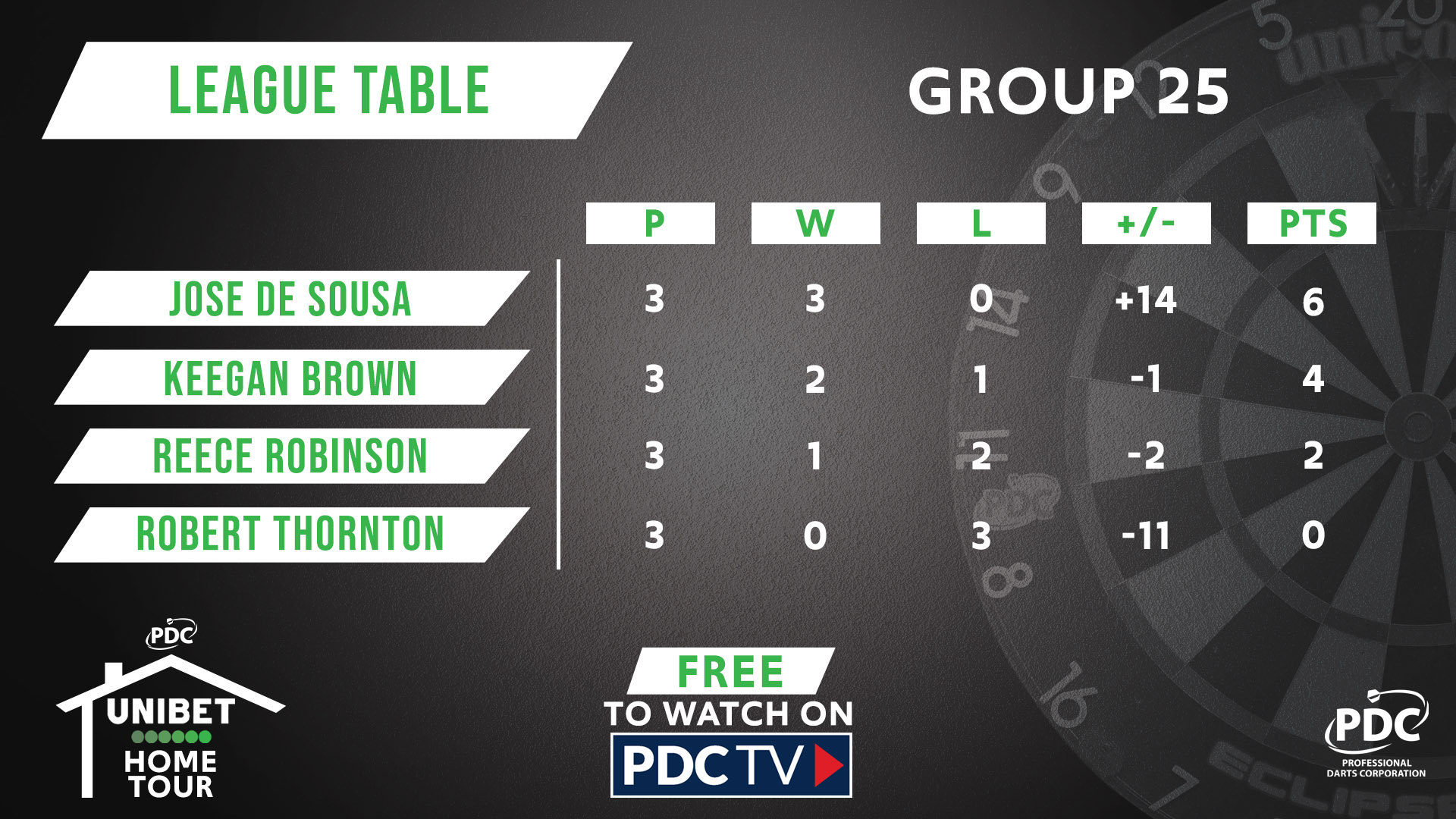 World Matchplay: Decision regarding go ahead expected in early June