Jamie Hughes was unfazed by technical difficulties and a last-minute opponent switch as he strolled into the second phase of the PDC Home Tour on a rather interruptive night.

Hughes, who lifted the Czech Darts Open in June of last year, was scheduled to face Lithuania’s Darius Labanauskas in his opening encounter, though, software problems led to a change of opponent at short notice.

Following his 91.75 average and 5-3 victory over Spain’s Toni Alcinas, it was Krzysztof Ratajski who stepped up to the plate, with the world number 18’s momentum seemingly being affected by the change in fixtures.

‘The Polish Eagle’ swooped on the opening leg with a magnificent 118 checkout, only for Hughes to subsequently claim five of the next six in legs of 15, 14, 15, 13 and 20 darts.

Labanauskas’ difficulties accessing the scoring software were then amended and he rejoined the action, succumbing to a 5-2 defeat at the hands of Hughes – who moved a step closer to sealing his place in the second phase.

After averaging in the low eighties in getting his campaign on the road, World Championship quarter-finalist Labanauskas upped the ante with a 96.35 average in whitewashing Spain’s Alcinas.

The Lithuanian raced out of the gates, opening up a 3-0 advantage, before landing checkouts of 126 and 89 on the bullseye to get his first win on the board.

Alcinas remained in place for the penultimate match of the evening, with Hughes eventually getting over the line with a victory in a deciding leg, having earlier missed darts for a comfortable 4-2 win.

Seven-time PDC ranking event winner Ratajski and former ProTour finalist Labanauskas were left to battle it out for the rights of finishing second best in the Group 24 table.

With scores level at three-a-piece in the night’s culminating collision, former World Masters champion Ratajski executed a remarkable 120 checkout with his opponent on a two-darter to break throw and move on the brink of second place.

Following Hughes’ dominance across the evening and his ability to complete the hat-trick, neither Labanauskas nor Ratajski were able to seal top spot.

Nevertheless, the reigning Gibraltar Darts Trophy champion pinned double eight second dart in hand to get his second win of the evening by a 5-3 scoreline.

The PDC Home Tour will resume on Monday evening with NHS worker Keegan Brown getting a second bite at the cherry following his connection issues almost two weeks ago.

Brown, who works as a laboratory assistant on the Isle of Wight, will be joined by multiple-time major champion Robert Thornton, two-time ranking event winner Jose de Sousa of Portugal and Reece Robinson in Group 25. 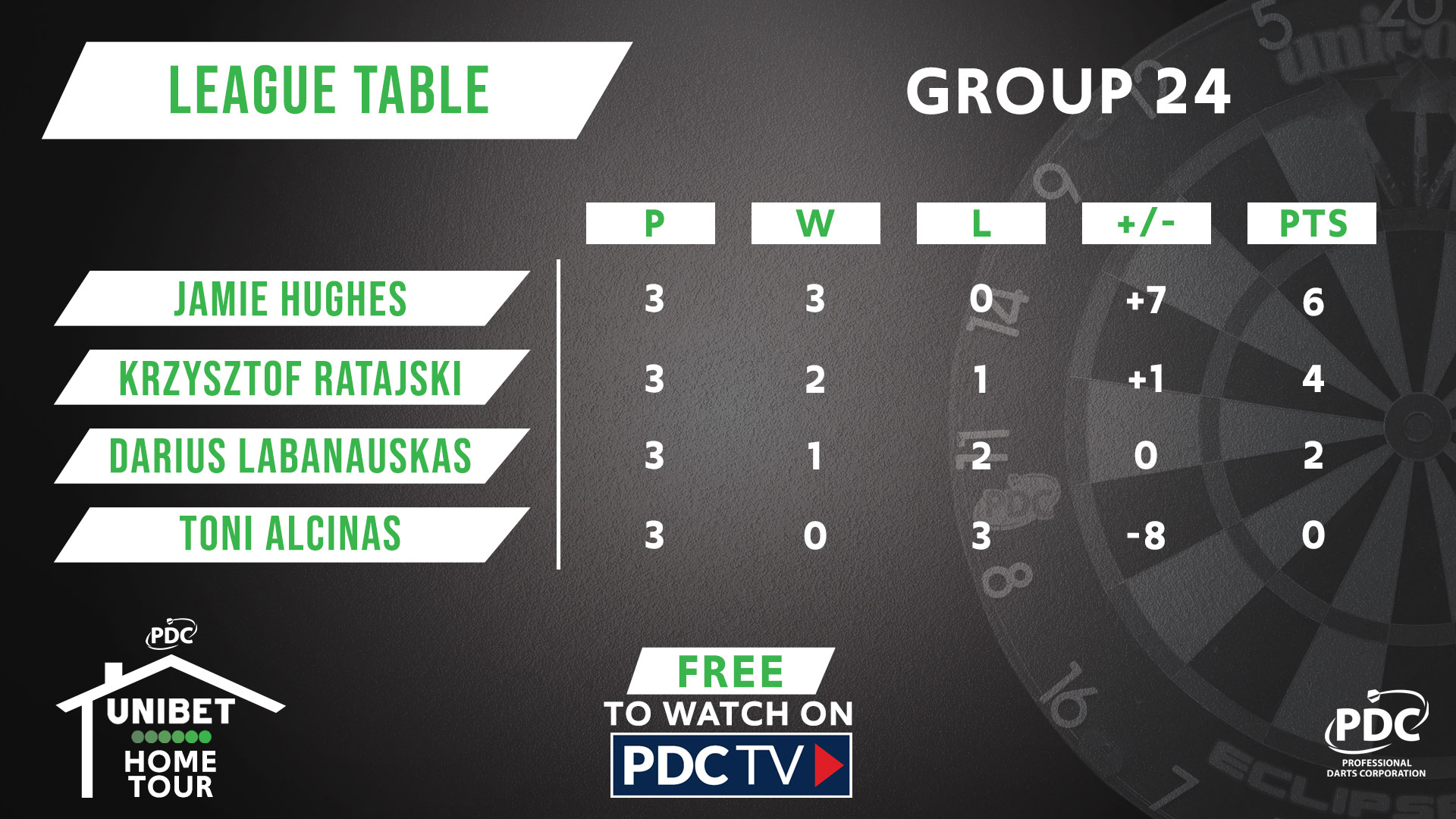