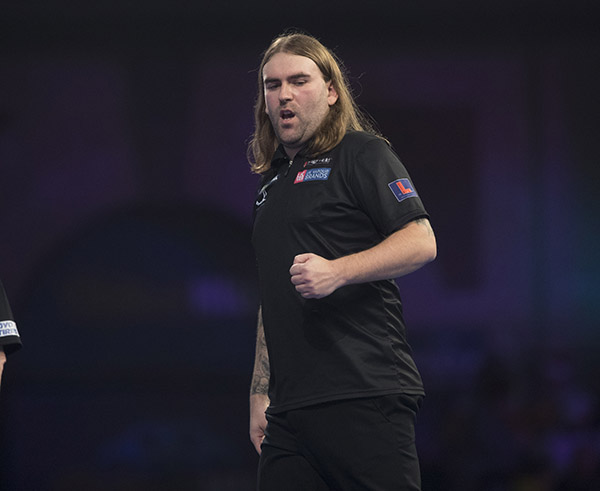 Three excellent performances from Ryan Searle were enough to see him comfortably win Group 6 of the PDC Home Tour ahead of Andy Boulton, James Wade and Adrian Gray.

The group result was the latest in a series of surprising outcomes with Nick Kenny, Luke Woodhouse and Jamie Lewis among those to also upset the odds so far.

The sixth evening of arrows started with nine-time major champion Wade facing up against world number 83 Adrian Gray, and a 147 checkout helped ‘The Machine’ on his way to a 3-0 lead.

Gray managed to hold throw a couple of times, but it wasn’t enough to stop the Aldershot man claiming a 5-2 win with an average of 94.

PDC title winner Searle managed to usurp Wade at the summit of the fledgling table after he took his chances expertly in a 5-1 success over Boulton.

There was only half a point in the averages, but a 120 finish in the sixth leg handed Devon’s Searle an invaluable two points, which he said were the most important in his overall tally.

Boulton immediately made amends for that unlucky scoreline with a 101 average in a 5-2 win over Gray. There were no real fireworks from the former Euro Tour event semi-finalist, but solid finishing and 7 140s ended Gray’s hopes of winning the group.

Searle then posted another highly impressive average in a 5-3 defeat of Wade, the highlight being a 155 checkout to round off a 12-darter. Wade only missed two darts at doubles, but the result meant he had to rely on ‘Heavy Metal’ losing his final match to have a chance of progression.

However, Searle got even better as he saw off Gray with ease, averaging 103 and hitting 71% of his doubles. Soft-tip star Gray managed to hold off his opponent in the early stages, getting to 2-2, but the Devon man then stormed away and won the group with a 106 checkout.

Aldershot’s Wade is known for his opportunism, and he seemed to be lacking motivation in the final match of the night with only second place at stake.

As a result, Boulton won all five legs with an average of 88, two legs won on the bull being significant moments.