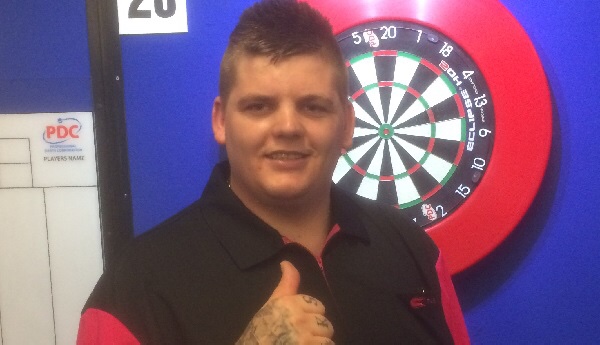 Corey Cadby, Eddie Dootson and Jeffrey de Zwaan claim the three automatic tour cards on day one at Qualifying School to enable themselves to play on the tour full time.

Corey Cadby wasn’t a major surprise to many darts fans around the world as he was a huge favourite to grab a tour card. The former World Youth Champion currently holds the record highest average in a preliminary round at the World Championship. Cadby has been a sensation on the PDC circuit, despite not having a tour card, as the ‘The King’ has beaten the likes of Phil Taylor and Raymond Van Barneveld on the World Series.

The Aussie saw off the likes of Jack Todd 5-3, former World Masters quarter-finalist John O’Shea 5-2, Plymouth’s John Mann 5-1, Nathan Rafferty 5-2 and Callan Rydz 5-2 on the way to claiming his first tour card. Cadby will be looking to push for titles on the PDC circuit now and cause some upsets against the big boys.

Eddie Dootson secured a two-year tour card which will give him the opportunity to play on the circuit full time. Dootson was a huge upset to many but he is a former UK Open qualifier in 2015, where he reached the Round of 16. ‘Popeye’ is a St Helens based darter coming from the same area as Stephen Bunting, Michael Smith and Dave Chisnall.

St Helens-based Dootson saw off some top-class players on his way to victory in Wigan including the likes of highly-favoured Cody Harris from New Zealand, John Goldie 5-3, David Pallett 5-3, Lee Turle 5-2 and Simon Preston before seeing off Stockport-based Nathan Aspinall 5-3.

Jeffrey De Zwaan, however, was not an upset at all! Many expected the Dutch ace to go on and retain his card after loosing it in 2017. De Zwaan becomes the first person to claim a tour card at the all new European Qualifying School and after he told RTL, “It was easy”.

On his way to victory in Hildesheim, the ‘Black Cobra’ saw off some outstanding players, beating Geert Nentjes 5-0 in round one before whitewashing Igor Pacic 5-0. De Zwaan stormed on with another 5-0 win over Helge Gross before thrashing Tomas Seyler 5-1 to reach the fifth round. In round five, the Dutchman saw off Davy Van Baelen 5-2 to edge closer and closer to regaining his tour card. De Zwaan then edged past Robert Marijanovic 5-3 before World Masters semi-finalist Gabriel Clemens 5-1. It was a Dutch-derby in the final round with Jeffrey coming out a 5-4 winner against Dirk Van Duijvenbode.

Danny Noppert reached the semi-finals in Hildesheim being edged out by fellow countryman Dirk Van Duijvenbode 5-3. Noppert will be back in the remaining three days of action in Germany and I’d be surprised if the Finder Darts Masters winner doesn’t get one of the golden tickets.

Former World Grand Prix and World Matchplay winner Colin Lloyd suffered an early exit at the UK Q School while Peter Evison was beaten 5-1 in the first round in Wigan. Four-time Lakeside finalist Tony O’Shea was dumped out in the first stage by Wes Newton and was joined by former TV finalists Shayne Burgess and Alan Tabern who also suffered first round defeats.

Cameron Menzies, Darryl Fitton, Jamie Hughes and Jeff Smith, who all switched over from the BDO this January had decent runs in Wigan but didn’t quite come through.

? Photography courtesy of the Professional Darts Corporation and congratulations to Corey Cadby, Jeffrey De Zwaan and Eddie Dootson on claiming their tour cards!