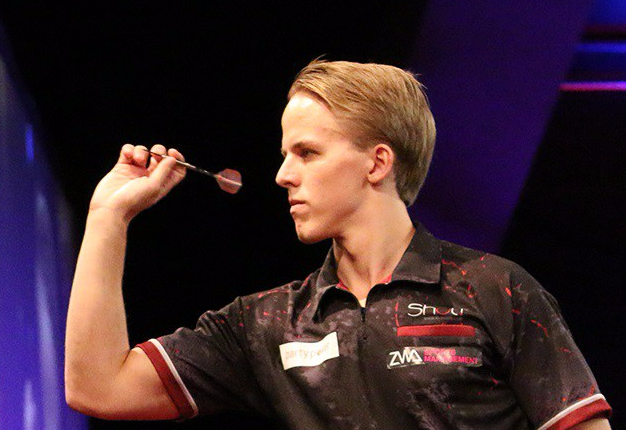 Dawson Murschell, Bradley Brooks and Gabriel Clemens all win automatic tour cards on the final day of Qualifying School while the Q School Order of Merit qualifiers are confirmed.

Dawson Murschell, a quarter-finalist at the US Darts Masters a few months ago, has claimed an automatic tour card on the final day of action in Wigan. Murschell attended Q School for the very first time and beat his fellow countryman Jeff Smith to a tour card.

The young Canadian began the day with a 5-2 win over Ben Simpson before needing a last leg decider to see off Ronnie Roberts. Luke Woodhouse was next to suffer a defeat to the Medicine Hat-based star before Matt Dicken and Keith Geraghty were next to fall. Tour card winner, Matthew Edgar, was next to be beaten by ‘Awesome Dawson’ with a 5-2 defeat. Terry Temple was the Canadian’s final opponent at the Robin Park Leisure Centre. Murschell edged past the York-based ace in a last leg decider to earn an automatic tour card.

Bradley Brooks has secured an automatic tour card in Wigan becoming possibly the youngest tour card holder in PDC history, at the age of just 17. Brooks was competing at the JDC European Open just a month ago where he took victory earning £1,500 in prize money. The youngster earned the chance to face Michael Van Gerwen, though, suffered an unfortunate 4-0 defeat on the Bristol stage.

Brooks began the day with a 5-3 win over Dennis Smith before beating the likes of Haruki Muramatsu, Stuart Comerford and Alan Tabern Jr. Wins over Darren Place and Simon Stevenson moved Brooks closer to the finish line as he reached the last eight. Ricky Williams, who saw off Bristol’s Steve Brown earlier in the day, was next to fall as he was beaten 5-2 by the 17-year-old Blackburn Rovers supporter. Brooks thrashed John Goldie 5-1 in the final round to claim his tour card.

Gabriel Clemens, a semi-finalist at the Winmau World Masters in September, claimed the final European automatic tour card after beating Vincent Kamphuis 5-3 in the final round. Clemens saw off Michel Furlani 5-2, Christopher Haensch 5-1 and Armin Glanzer before winning a last leg decider against Tom Burquel. A victory over former tour card holder Yordi Meeuwisse followed as the German won 5-2. Solid wins over Robert Marijanovic and Boris Koltsov came next, with Clemens eventually claiming his tour card against Vincent Kamphuis in the final with a 5-3 win.

Danny Noppert, a former World Championship runner-up at the Lakeside, was joined by Croatia’s Robert Marijanovic, Dirk Van Duijvenbode, Vincent Kamphuis, Davy Van Baelen and Jose Justicia as they earned the chance to compete with the PDC’s very best. Alicante-based Jose Justicia became the third Spainish player to join the Pro Tour, accompanied by the likes of Cristo Reyes and Toni Alcinas.

Brazilan Diogo Portela and Poland’s Krzysztof Ratajski missed out on a tour card despite playing some very good darts throughout the four days in Hildesheim.