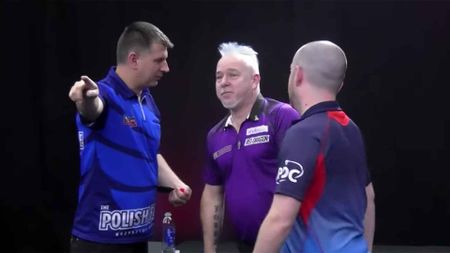 Krzysztof Ratajski explained. Peter Wright listened. Referee, Luke Guest, paced back and forth in disbelief. It was a tremendous occasion in Barnsley as a wondrous Wright chronicled a record-breaking 123.5 average in the penultimate ProTour event of the season.

Having been elected streaming board marker and having refereed under the roof of the PDC for seven years, Guest is arguably the most trusted ProTour referee.

“There’s no story behind it really,” he said. ”I just happened to be in the right place at the right time. I saw on social media that the marking scheme was one short for a ProTour in Barnsley in 2012 and I asked the question.

“I wasn’t even aware that there was such a scheme prior to this and I never expected it to become such a big part of my life but I’m glad it is.

“I turned up and it went well, I felt comfortable and was invited to the next event. Once I’d gained a bit of experience on the tour, I started to mark a few exhibitions and was delighted to be asked by the PDC to cover the streaming at all ProTour events, which is a great honour.”

Guest, a Bradford accountant by trade, had the best seat in the house as Wright produced unprecedented excellence on the oche.

“It was an amazing thing to be a part of,” he added. “I could very realistically do this for the rest of my life and not officiate an average as big as that again.

“It was just one of those games where everything clicked and Peter fully deserves all the plaudits. His opponent Krzysztof averaged 102, which is world class, and he never had a sniff of a chance.”

Former World Championship finalist, Wright, himself was left without a clue that he had reached the transcendence that he did. The Scotsman needed Ratajski to inform him post-match. Luke was almost certain.

“I was fairly sure, I knew Michael van Gerwen’s record was 123 but wasn’t sure if Peter had just pipped it.

“Peter didn’t seem to have any idea so that was quite a funny moment when Krzysztof told him. You can also see [following the match] that I went back to double check the exact figure on the tablet as I was still in a bit of disbelief!

“It was the day after that there seemed to be a bit of a buzz about it, but Peter, in his usual style, just seemed to shrug it off and move on.

“My fellow officials were very happy for me as well, I’d had a bit of bad luck with seven missed doubles for nine-darters since August on my board so they knew I was due something like this!”

“I couldn’t quite believe it! The previous highest average I officiated was 115 by Ian White in 2017, so to have that bettered heavily twice in two days was amazing.

“Max averaged 119 over eight legs and in leg four he didn’t even hit a treble, so if you take that leg out you’re looking at about 123 over seven legs – you could argue that’s even more impressive than Peter’s performance!

“Ian must have been stunned to lose 6-2 with a 111 average, it could be a while before we see something like that again. It was the best game I’ve ever seen.”