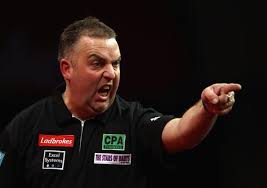 The first round at Alexandra Palace in 2012 saw an opportunity for Raymond van Barneveld to make serene progress, as he came up against Northamptonshire debutant, James Richardson.

“Ruthless” Richardson was focused as he walked on to the patriotic strains of Fat Les’ World Cup anthem, Vindaloo, and van Barneveld gave a new peach shirt an airing, as well as a fresh haircut as he looked in relaxed mood. Rod Harrington in the Sky Sports studio expected a 3-0 win for the five times world champion, and so did a the majority of the crowd and TV audience.

The Dutchman’s relaxation continued with his first three darts, a 180, which sent the message that he was in no mood for any kind of shock, a 12 darter against the throw with a 130 checkout in the opening leg backed this feeling up.

What followed was just under 30 minutes of carnage, and one of the biggest upsets the PDC World Championship has seen. Barney went 2-0 up in the first set, but back roared Richardson with a massive 145 checkout to level the tie. He then took the set on double one to settle his nerves.

Richardson’s scoring was damaging the man from The Hague, and van Barneveld was missing key doubles, allowing Richardson to move 2-0 up in the second set with a 41 checkout to make it five legs on the spin. van Barneveld stopped the rot on double nine, but a 120 finish moved Richardson within a set of a massive upset.

Barney threw in a 11 darter to rouse himself in the opening leg of the third set,and took the second too, but Richardson was living up to his nickname, Barneveld missing two darts for the set, as Richardson saved the set. He then broke his opponent’s resistance with another monster 145 checkout to level up, and he completed one of the biggest shock’s in the tournament, watching RVB miss a dart at the bull for a 167 finish, and then two darts at double eight. In stepped Richardson, finishing 41 in two darts for a famous win.

Richardson’s heroics would end in the very next round, with a 4-1 defeat at the hands of Kim Huybrechts, but the Rushden man will never forget his debut at the biggest event in World Darts.