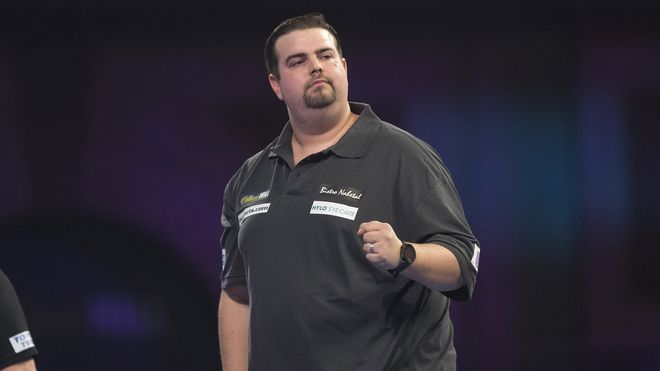 After history was made on Tuesday evening at Alexandra Palace, another action-packed day of arrows awaits in London.

Fallon Sherrock become the history maker in ousting Ted Evetts and becoming the first women to win on the Alexandra Palace stage, with the seeds, Jeffrey de Zwaan and Krzysztof Ratajski, also prevailing.

The coverage will get underway from 1pm at Ally Pally, with the television cameras and the millions of viewers around the world being hooked on the biggest tournament in the sport.

Ben Robb produces a huge display to beat Simon Whitlock and book his place in the Quarter-Finals.

New Zealand has produced some valiant darts players over the years, from Warren Parry to Cody Harris. The likes of Parry and Haupai Puha were involved at the DPNZ Qualifier, though, it was Ben Robb who pulled through.

Robb definitely isn’t heading to London to make up the numbers. The 31-year-old averaged 96 in beating Simon Whitlock and losing to Rob Cross at the NZ Darts Masters, and has lifted titles on both the DPA and DPNZ circuits this year.

As for Ron Meulenkamp, he’s had a fairly solid yet unspectacular year. The Dutchman has reached multiple semi-finals on the ProTour, though, hasn’t won at a major since last year’s World Championship.

Rob Cross and Adam Hunt defeated ‘The Bomb’ in his two major appearances this year, with Meulenkamp looking to bounce back at Alexandra Palace.

Meulenkamp did knock out Gary Anderson at the 2016 Players Championship Finals – which remains his best major result, reaching the last 16.

Prediction: 3-1 Meulenkamp – Robb will be making his World Championship debut, and I think he’ll take a set, though, Meulenkamp will prevail.

?? Seigo Asada found his rhythm at the right time#WHDartspic.twitter.com/KqrzgIu0Dv

Seigo Asada has been tipped by many to have a run at the Alexandra Palace. He could mean fellow Asian, Noel Malicdem, in the third round, though, that would require Asada beating Mickey Mansell and Keegan Brown, and the Filipino defeating Peter Wright.

His opponent, Mickey Mansell, has endured a torrid time on the ProTour this year, reaching just the one quarter-final – which was instrumental in him snatching the final PDC ProTour qualifying spot.

The Alexandra Palace doesn’t hold good memories for Mansell, having been fined 12 months ago for ‘failing to play to the best of his ability’ by the Darts Regulation Authority.

Prediction: 3-1 Asada – ‘The Ninja’ will fancy his chances against an out-of-sorts Northern Irishman. Asada performed outstandingly last time around and that continues into this year.

Having won his PDC tour card as recently as January, Harry Ward has already lifted a PDC senior title, defeating Max Hopp in the final.

However, the 22-year-old has failed to kick on since then. ‘Big H’ has produced spells of excellence on both the ProTour and the Development Tour, though, his consistency has remained indiscernible.

As for Madars Razma, alongside Darius Labanauskas, he’s dominated the PDC Nordic and Baltic scene and has continued to put the sport on the map in Latvia.

Razma, a fully fledged tour card holder in his own right, has blown hot and cold this year, though, without the luck of results, reaching the last 16 just once on the ProTour this year.

Ward and Razma have met twice on the professional circuit within the last two years, with scores level. Although, Ward won their latest encounter during his run to ProTour success in Barnsley.

Prediction: 3-2 Razma – Razma has tasted success on multiple occasions on the PDC Nordic and Baltic scene this year and has more TV experience than Ward from his BDO days. It will be a tight tussle, but Razma takes it for me.

‘The Bullet’ has reached two ProTour finals this year, losing to Jamie Hughes and Jeffrey de Zwaan respectively, with his run to the inaugural Czech Darts Open final being the stand-out moment for Bunting this year.

Jose Justicia is well known for his UK Open Qualifier scuffle with Adrian Lewis at the beginning of last year, but has reached two quarter-finals since joining the PDC ranks in January 2018.

The Spaniard has already experienced the stage settings at Alexandra Palace this year, whilst defeating Arron Monk in the first round.

Prediction: 3-1 Bunting – Justicia looked decent in round one, but if Bunting plays anywhere near to the standard he did in Minehead, he’ll be a threat to anyone.

Nico Kurz rose onto the scene earlier this year, with a monumental victory in beating Gary Anderson during the German Darts Masters in Cologne.

Since then, the young German has topped the German Superlegaue and denied Martin Schindler in the qualifier in order to clinch his World Championship debut.

His opponent, James Wilson, is obviously a seasoned professional. Despite an injury-ridden year, Wilson has still reached the last 16 or better six times.

The ‘Jammy Dodger’ also more recently ousted Peter Wright in the first round of the Players Championship Finals in Minehead.

Prediction: 3-1 Wilson – Wilson will more than likely come through, but Kurz will cause the Huddersfield man problems.

?? Waving the Brazilian flag…@Brazilliant180’s story is incredible. From playing alongside Champions League winner Marcelo during his youth to playing darts on the biggest stage of all. https://t.co/iXOfK6UnDF

Adding a slice of Brazilian flare into the World Darts Championship, Diogo Portela has relocated from Rio de Janeiro to Chorley near Manchester in order to pursue this very dream.

Whenever the fluorescent ‘Braziliant’ appears on stage, patches of green and yellow emerge in the crowd, with supporters travelling from land afar to get behind their man.

Portela once again pulled through the Central and South America Qualifier in order to seal his Ally Pally return, after a reasonably poor year on the circuit.

Following failure at Qualifying School in January, the Brazilian has reached the last 16 just twice on the PDC Challenge Tour, after lifting his maiden title just last year.

As for Josh Payne, he’s also struggled slightly this year. The Gravesend man has made the last 16 just thrice on the PDC ProTour, though, ‘The Maximum’ did somewhat surprisingly embark on a run to the UK Open quarter-finals.

Payne was narrowly defeated by Dave Chisnall in the second round 12 months ago, while Portela was handed a major blow in round one thanks to Ron Meulenkamp.

Prediction: 3-2 Payne – Payne comes alive on the Alexandra Palace stage, any stage in fact. He’ll just about see off the Brazilian.

? Gabriel Clemens, that is SENSATIONAL!

The two leading forces of German darts could potentially collide in the second round at the Alexandra Palace, but Benito van de Pas will inevitably have something to say about that.

Van de Pas came through the last chance qualifier at the backend of November, after yet another disappointing year for the Dutchman.

‘Big Ben’ could be heading back to Qualifying School in January, with his tour card hanging on a pinhead – which seems remarkable considering he was well in contention of a Premier League spot just a few years ago.

As for Clemens, his career is very much on the up, reaching the final at the German Darts Masters, losing only to former UK Open champion Peter Wright.

The ‘German Giant’ has also reached multiple ProTour finals this year, as well as breezing through a tough group at the Grand Slam of Darts, containing Daryl Gurney and Brendan Dolan.

The World Championship is the chance for Clemens to really lay down a marker, and showcase his ability to the darting world, though, his opponent Van de Pas has reached the last 16 in four of his five appearances at Ally Pally.

Van de Pas has never beaten Clemens, with the German winning twice this year, including a rampant 10-3 triumph at the UK Open in Minehead.

Prediction: 3-1 Clemens – There has been a vast difference in form between these two over the last two years. Clemens comfortably sets up a second round meeting with Max Hopp here.

Edhouse will need to head back to Qualifying School in January if he doesn’t do enough this December, with beating James Wade an essential part of the recipe.

After winning both the European Championship and World Series Finals last year, Wade’s TV form has been slightly disappointing this time around, despite him having reached the Premier League semi-finals and the Masters final.

‘The Machine’ has undergone last 16 exits at both Minehead tournaments, as well as early exits at the World Grand Prix, European Championship and Grand Slam of Darts.

Wade, however, has produced some sensational stuff on the floor this year, winning five ProTour events, and reaching another seven quarter-finals or better.

Prediction: 3-1 Wade – Edhouse eased into the second round with minimal problems against Russia’s Koltsov, but Wade will scupper his tour card hopes – for now anyway.