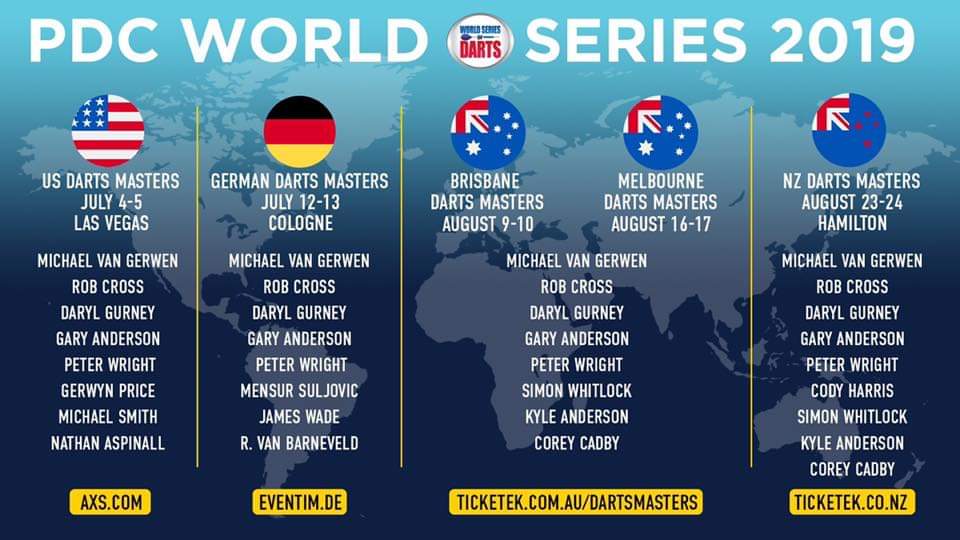 The Professional Darts Corporation(PDC) have announced their 2019 World Series entrants.

The PDC roadshow this year goes to Hamilton in New Zealand, Las Vegas in USA, Brisbane & Melbourne in Australia and Cologne in Germany.

Notably there are no Middle East or Asia dates released as yet.

The worlds top five are invited to all of them – MVG, Rob Cross, Daryl Gurney, Gary Anderson and Peter Wright.

First up in the United States they will be joined by Wales’ Gerwyn Price, World Finalist Michael Smith and the UK Open Winner Nathan Aspinall.

In Germany the top five are joined by James Wade, Mensur Suljovic and a controversial pick Raymond van Barneveld. Max Hopp misses out this year from the invites. It’s difficult to argue why to pick Barneveld considering he nearly retired a week or two ago and he hasn’t been at the races the last 18 months. But he gets the nod for Germany. What do you guys think of that one?

Next up the PDC crosses the continents to Australia and New Zealand. The top five in the world travel again to Melbourne and Brisbane and stop off in New Zealand in Hamilton.

In Australia Corey Cadby, Simon Whitlock and The Original Kyle Anderson make the cut. They are joined by Cody Harris in his native New Zealand.

Some interesting picks there, no Max Hopp, no Glen Durrant, Ian White, Joe Cullen or Darren Webster. I expected White, Cullen or Webster might get an invite especially as they were overlooked for the Premier League Contenders.

No doubt Barney will be a talking point. I can’t help but feel others were more deserving in my opinion.

Looking forward to the World Series especially my country man Daryl Gurney who I expect to win one of the events if he can pull himself together.

What do you all think of the selections?