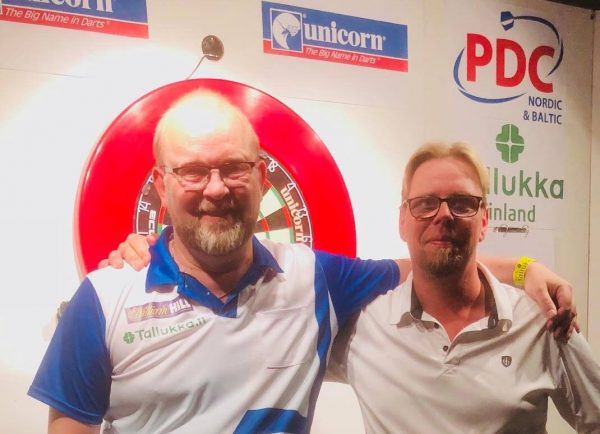 Marko Kantele and Cor Dekker both claimed their maiden titles of the year at the weekend in Finland while Darius Labanauskas took all three qualification spots available.

Kantele, who will represent his nation at the World Cup of Darts, secured his first title of the year and €1,200 in prize money.

The 49-year-old lifted the title in his hometown of Vääksy and began the day with victories over Niels Heinsøe and Hannu Suominen before edging past a winner on the Challenge Tour this year in Dennis Nilsson to reach the semi-finals at the Hotel Tallukka.

The semi-finals saw Kantele once again come through a last leg decider; this time against Sweden’s Daniel Larsson – who won the second event of the year in Copenhagen.

Kantele would meet fellow countryman Ulf Cedar in the final – who was competing in his first final since the opening PDC Nordic and Baltic event of the year in January. Cedar, a 44-year-old from Lahti in Finland, negotiated victories over Pauli Finnilla, Torbjorn Gustafson, PDC tour card holder Madars Razma and Vesa Porkola – who terminated Darius Labanauskas’ run at the quarter-finals stage.

Kantele relished a convincing 6-2 win over Cedar as he claimed his first title on the PDC Nordic and Baltic circuit since August – where he defeated Cor Dekker in the final.

Dekker reached the second round with Norway back in 2016 before the country were dropped from the 32 teams who compete at the competition and opened his title-winning tournament with a 6-2 win over Vitor Charrua. Charrua is a Icelandic Premier League competitor – which can be viewed weekly on the LiveDartsIceland Facebook page.

Victories over Vesa Nuutinen and Daniel Larsson followed for Dekker as he progressed through to the semi-finals in Finland – where he’d meet the previous event winner Marko Kantele. Dekker enjoyed a 6-3 victory over Kantele on his opponent’s home soil to kick on to the final where he comfortably saw off Magnus Caris – who will absent from Sweden’s World Cup of Darts pair for the first time after competing for seven straight years.

Darius Labanauskas has been on fire this year on the PDC Nordic and Baltic circuit, winning two events and qualifying for one European Tour events before play began at the weekend in Finland.

Labanauskas, who suffered a first round exit at the Lakeside in January, completed the qualification treble meaning he’ll appear at the Gibraltar Darts Trophy and both the European Darts Matchplay and German Darts Championship.

‘Lucky D’ was superior on the opening night in Finland beating both Madars Razma and Magnus Caris before a win over Stockholm-based Oskar Lukasiak completed the treble.

The PDC Nordic and Baltic tour will resume next month with five spots on offer for Denmark’s very own European Tour event before the PDCNB ProTour travels on to Gottenburg in Sweden in three months time.