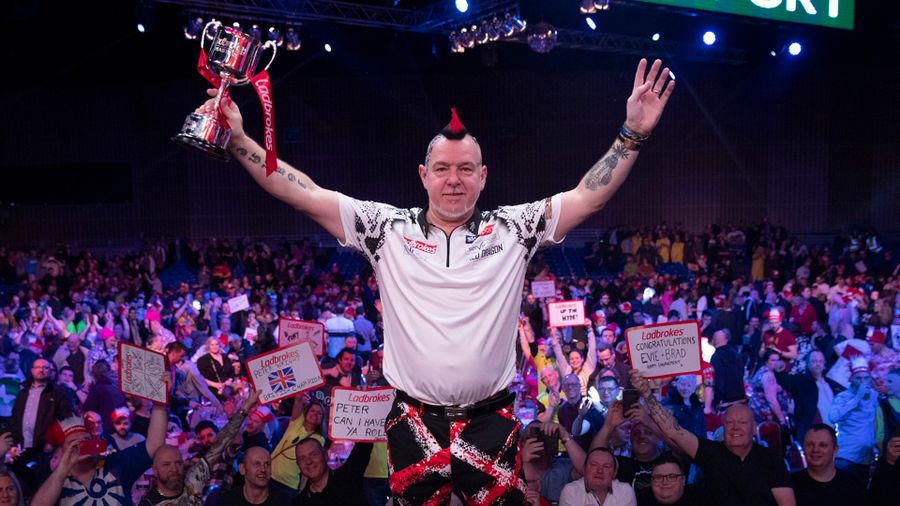 Peter Wright continued his blistering vein of form as he followed up his World Darts Championship success with a triumphant campaign at the Ladbrokes Masters in Milton Keynes.

His bank balance will be heading through the roof as he trousered another £60,000 in coming through a field containing the world’s top 16 at the Marshall Arena in his first tournament as the newly-crowned champion of the world.

“I’m a very lucky player tonight,” said Wright following his maiden Masters triumph. “Michael should’ve won that. I’ve been in his position many times before, so I know how he’s feeling and it’s not nice.

“But, I’m obviously over the moon to win the first tournament of the year and hopefully there will be many more.

“I think my performance dipped at the end of the day, I started missing too many doubles so I need to cut that out.

“Overall, I’m really happy with how this weekend went and I’d like to thank the amazing crowd for making it another special night for me.”

Wright began his campaign with a 103.55 average in seeing off Joe Cullen to seal his place in the final day, before whitewashing a struggling Dave Chisnall 10-0 to reach the semi-finals.

He then pinned seven maximums in a 10-7 victory over Scottish World Cup winning teammate Gary Anderson to book his spot in the final, and move within one of his third televised major crown.

The final commenced with ‘Snakebite’ opening up a commanding 5-2 advantage, only for Smith to battle back and find his way into the contest at 6-4.

Smith continued his valiant chase on his Scottish opponent, landing a 130 checkout to level up proceedings at eight-a-piece. The next four legs were shared, with all roads leading to a last leg decider.

The St Helens man did all he could in the decider scoring wise, pinning a maximum and a 140 to leave 181 after just six darts, though, a crucial 171 from the reigning world champion piled the pressure on Smith.

‘Bully Boy’ squandered darts at both double 20 and double 10 as he was left disappointed in a televised final once again, after Wright pinned double eight with his last dart in hand.

Jonny Clayton pulled off the shock of the tournament as he ousted reigning champion and world number one Michael van Gerwen on his Masters debut in Milton Keynes.

The Welshman averaged just 93.75 in their first round clash, though, it was enough to defeat the world number one. Clayton becomes the first player to do so at the Masters since 2014, with van Gerwen’s five-year reign as Masters champion coming to a close.

Clayton’s run was short-lived, however, as Nathan Aspinall got the better of him in the quarter-finals.