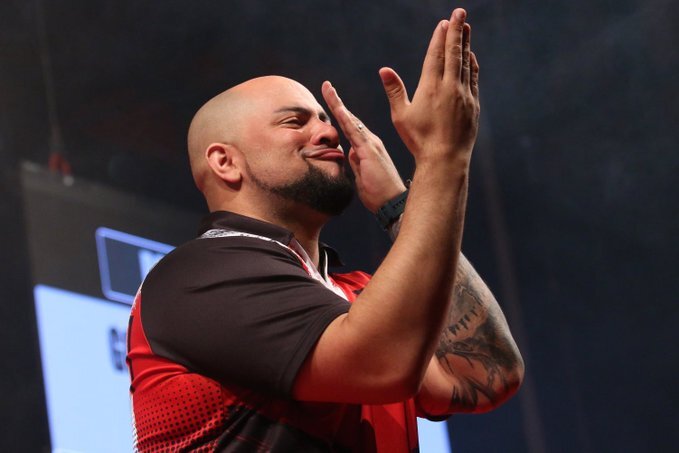 The Welshman had seen off ‘The African Warrior’ in one of the finals at the PDC Autumn Series, but Petersen exacted revenge in style, coming from 5-1 down to set up a last-16 clash with Rob Cross on Sunday afternoon.

Due to the truncated qualification process for the European Championship, anyone in the third round can consider themselves fairly close to, if not in the field for the Dortmund event.

Elsewhere on Saturday, Peter Wright averaged 106 to beat Michael Smith in their heavyweight clash, while three other seeds joined Price in losing their first match.

The World Champion was handed a very tricky draw but negotiated it in fairly straight-forward fashion (Photo: PDC Europe)

Hopp’s win made him the only German through to the final day of action as Lukas Wenig, Gabriel Clemens, Dragutin Horvat and Nico Kurz all lost.

Wenig was whitewashed by a scintillating Dave Chisnall in the day’s opening fixture, while Clemens never really got going in defeat to Daryl Gurney.

Nathan Aspinall was too good for Horvat, and Kurz was made to rue missed doubles against James Wade after the match was rescheduled due to ‘The Machine’ missing his flight to Germany.

The aforementioned King is now guaranteed to be at the World Grand Prix in Coventry, while Jonny Clayton picked up a huge victory against Chris Dobey to do the same.

There are now just two more places up for grabs at the double-start event, one via the ProTour and one via the main Order of Merit.

Both Adrian Lewis and Kim Huybrechts look fairly safe, but ‘Jackpot’ would be overtaken if Jonny Clayton won the tournament, and ‘The Hurricane’ would be out of contention if Max Hopp delighted the home fans by lifting the title on Sunday.

Other results in the second round included comfortable 6-3 wins for Glen Durrant and Rob Cross. ‘Duzza’ saw off Scott Waites in a repeat of the 2019 BDO World Championship final, and ‘Voltage’ hit 50% of his doubles in seeing off William O’Connor.

Four former European Tour winners were the remaining players to progress, one of them by far the most successful on the circuit.

Michael van Gerwen won three legs in 38 darts against Steve Lennon from 2-1 down to break the back of the match. The world number one went on to win 6-2.

A pair of Euro Tour champions in 2019, Joe Cullen and Mensur Suljović, both won 6-4 against Adam Hunt and Jeff Smith, with the latter’s Grand Prix hopes now over.

The German Darts Championship continues on Sunday at Halle 39 with the last 16 in the afternoon followed by the quarter-finals, semi-finals and final in the evening.