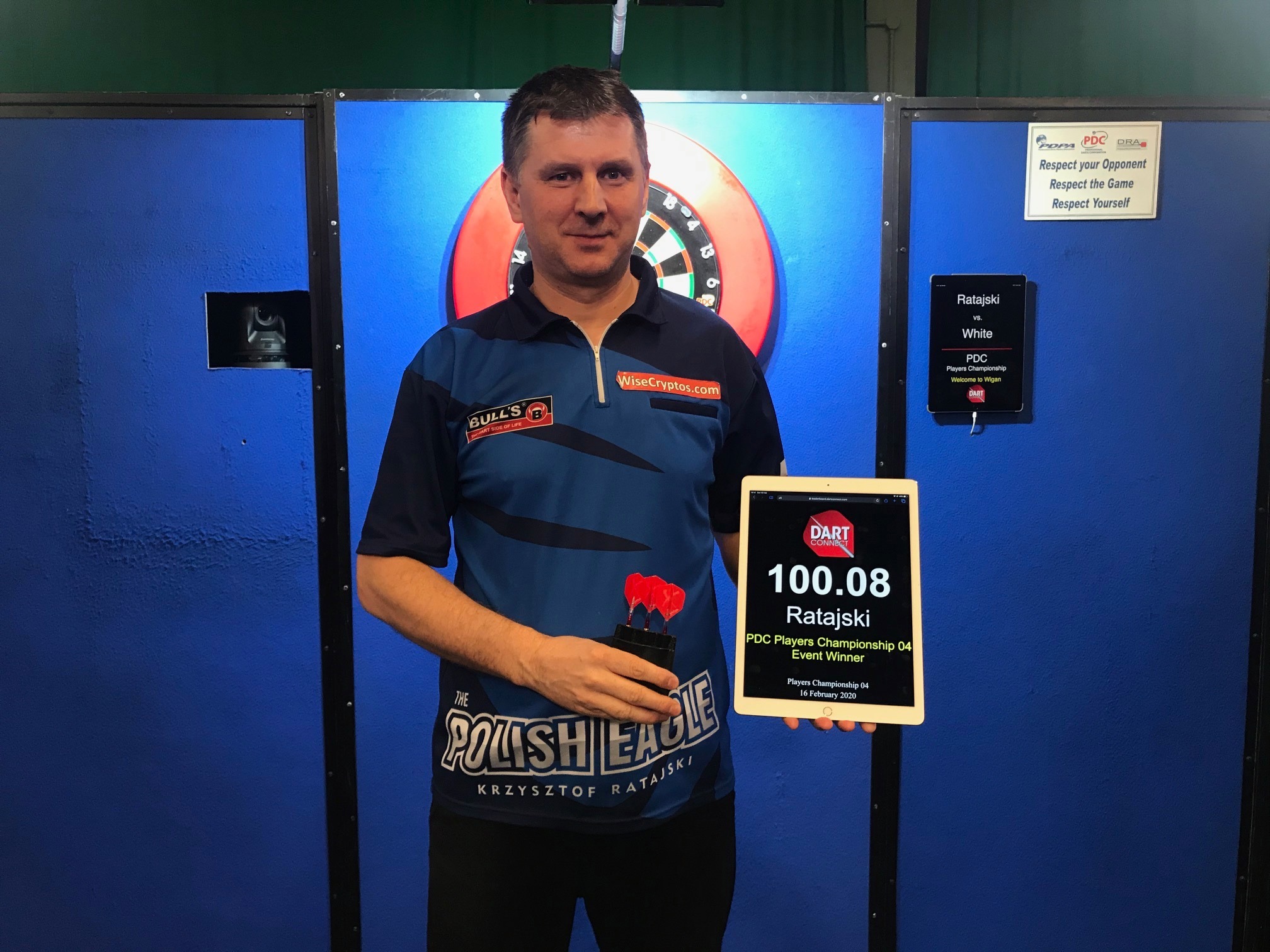 Poland’s Krzysztof Ratajski swooped on a seventh PDC title at the Robin Park Leisure Centre in Wigan as he averaged a scintillating 100.08 for the tournament and defeated Ian White 8-7 in a closely contested final.

After bursting on to the professional scene in exhilarating fashion two years, winning three ProTour titles despite not owning a tour card, Ratajski has continued to showcase his undoubtable ability.

His sixth title arrived on the European Tour in September, and the 43-year-old added to that ever-growing honours tally with another flurry of fantastic performances.

‘The Polish Eagle’, who rose into the limelight with an impressive victory over Glen Durrant on his way to lifting the prestigious World Masters three years ago, opened his account whilst surviving a significant scare.

A 6-3 win over Vincent van der Voort followed for the Pole as well as three successive ton-plus averages to book his place in the final.

Nick Kenny led 4-3 in the fourth round, though, was unsuccessful in getting over the finishing line, spurning multiple match darts. Ratajski recorded a 104.5 average in eventually seeing off the Welshman.

Subsequently, the Gibraltar Darts Trophy champion clocked a scintillating 106.5 average in seeing off Germany’s Gabriel Clemens, with the eventual champion being on the end of a mesmerising 170 checkout.

A rampant Ratajski then pinned high outshots of 132 and 136 in comfortably overcoming Danny Noppert in the semi-finals. Former BDO World Championship finalist, Noppert, had defeated world number one Michael van Gerwen in the quarter-finals.

Meanwhile, Ian White reached his seventh PDC ranking final in the space of 12 months courtesy of a hard-fought, comeback victory over the reigning world champion Peter Wright in the semi-finals.

The Stoke-on-Trent-based thrower trailed 6-5 in a race to seven, with Wright seemingly set to make his first ranking final since lifting his maiden world title on New Year’s Day.

The first six legs of the final were each won with the throw, though, Poland’s Ratajski punished a number of missed doubles from his opponent, pinning his favourite double 16 to break the throw and gain a slender advantage.

He then fired in his third maximum of the affair as well as a magnificent 136 set-up shot to leave tops after three visits and therefore succeeded to move two legs adrift.

Ratajski continued to plod towards the finishing line, eventually leading 7-5 and needing just a solitary leg to claim his eighth PDC, however, Ian White had other ideas.

The former World Championship quarter-finalist pinned double eight to move within one of his Polish opponent, before in the following leg producing a moment of shear brilliance. While Ratajski was sat on tops for the title, White nailed a breathtaking 155 checkout to remain afloat.

It would have been very apt for Ratajski to come back at ‘Diamond’ with a captivating finish of his own, though, the Pole wired the bull for a 170 outshot, before cleaning up on double eight to seal the deal and trouser £10,000.

A revelling Ratajski told pdc.tv following his triumph: “When Ian took out 155 it was a terrible moment for me, it made it really hard.

“This tournament was sometimes lucky for me, I won a few games 6-5 and I survived match darts twice. But then I played very well with averages over 100 and I feel very comfortable with the new darts I am playing with.

“I hope this will be my best season. Last season was brilliant and I hope this one will be even better.”

Elsewhere, Michael van Gerwen remains without a title since November as his compatriot Danny Noppert conquered the world number one in an impressive quarter-final scalp.

‘Mighty Mike’ was seemingly in cruise control throughout the day in Wigan, clocking invigorating averages of 110.9 and 107.4, but fell short once again after losing Saturday’s final at the hands of first-time winner Ryan Searle.

Noppert raced into a 3-0 lead over the three-time world champion, pinning two maximums, and despite being forced to fend off a valiant fight back, the 29-year-old found a composed 11-darter to hand van Gerwen further disappointment.

Maik Kuivenhoven reached his second quarter-final of the season and impressed once again, beating Joe Cullen, Jason Lowe, Ryan Joyce and Daniel Larsson, before eventually falling at the hands of a blistering 112.8 average from Peter Wright.

Czech number one Karel Sedlacek, who came through European Qualifying School a matter of weeks ago, embarked on his deepest run since winning his coveted tour card.

Players Championship Three winner Ryan Searle was defeated in the third round by James Wade, while Daryl Gurney, Michael Smith and Dave Chisnall were amongst the first round casualties at the Robin Park Leisure Centre.

Jonny Clayton, who will appear as the latest challenger in the Unibet Premier League on Thursday, exited in the second round thanks to a 6-3 defeat to his countryman Nick Kenny.

Despite departing in the second and third rounds across the weekend, Clayton pinned two ton-plus averages heading into his one-night only Premier League appearance in Cardiff.