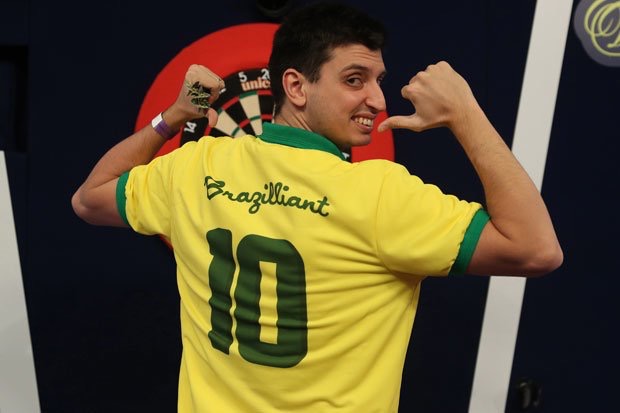 Diogo Portela and Simon Preston have claimed their maiden PDC titles on the opening weekend of Challenge Tour action at the Robin Park Leisure Centre in Wigan.

Diogo Portela recently became the first Brazilian to qualify for the William Hill World Darts Championship as he came through the Central and South American World Championship Qualifier in Rio De Janeiro and today has claimed his first PDC title on the Challenge Tour.

‘Brazilant’ agonisingly missed out on snatching a tour card last weekend in Hildesheim, loosing out on the golden ticket by one point. Because of this, the Brazilian was forced to play Challenge Tour to have any chance of playing any Players Championship darts this year.

Ben Burton suffered a 5-3 defeat to Portela before a 5-3 win over Michael Bernard secured the title for ‘Braziliant’.

Simon Preston was the winner of the years opening Challenge Tour event, picking up the £2,000 in winners prize money.

Preston began the day with a 5-2 win over Stuart Kellett before edging past Scottish Open champion Cameron Menzies 5-4. Back to back 5-3 victories followed as Preston reached the last 16 with wins over Andy Boulton and Michael Gillet.

Suffolk-based Brett Claydon was next to suffer defeat to Preston before the semi-final beaconed with a 5-2 win over Michael Bradbury. Berry Van Peer was Preston’s semi-final opponent but was beaten 5-3 before Preston saw off inform youngster Jarred Cole 5-2 in the final.

Hertfordshire-based ace, Cole, had a fantastic 2017 in both the Junior Darts Corporation and BDO circuits. ‘King of the Castle’ finished top of the JDC UK Tour Order of Merit and was crowned Finder Darts Masters Youth winner in December.

The teenager then defeated a former World Championship qualifier in Mark Frost 5-3 in the semi-finals as he secured a spot in the decider, but had to settle for the £1,000 runner-up prize.

Photography courtesy of Lawrence Lustig and the PDC