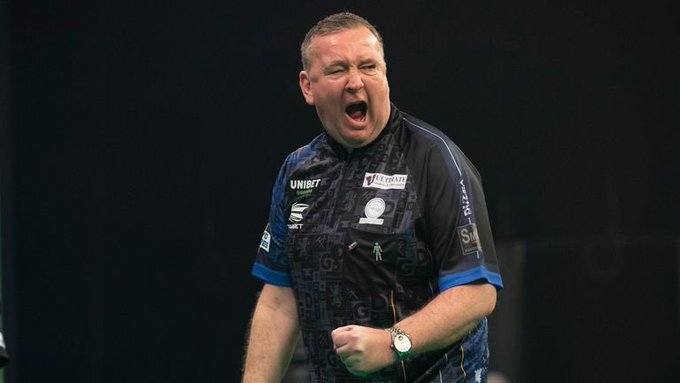 The pair exchanged words before their blockbuster meeting, but it was ‘Duzza’ who played the better of the two, averaging 104.4 and taking out a 167 finish on the way to a 7-3 win.

Elsewhere, it was a big night at the bottom of the league as Daryl Gurney produced a gutsy performance to beat Nathan Aspinall 7-5, before Rob Cross failed to really get going against Michael Smith, falling to a 7-3 defeat.

Gurney gave it his all and came up with a huge win. Credit: Lawrence Lustig

That means Cross has it all to do going into Thursday’s Judgement Night. It’s the first time he’s been bottom of the table all year, but he must pick up at least a point against Durrant to have a chance of survival. Gurney knows a win against Peter Wright would see him into the second phase.

The evening began with an important meeting between Gerwyn Price and Gary Anderson, who suffered contrasting fortunes on Tuesday. Price stormed out of blocks, taking the first two legs in rapid fashion.

His level dropped slightly after that but Anderson couldn’t capitalise, missing three doubles for the third leg, and he never really recovered, the Welshman sealing a 7-1 win that sees him all-but safe from relegation.

Then came that crucial game for Gurney against play-off contender Aspinall. The former UK Open champion was looking close to untouchable on throw in the early stages, but couldn’t find that level against the darts.

Gurney hung in there until 3-3, and then started to kick, getting the break of throw he needed and eventually seeing it out 7-5 with 64% on the doubles for a second successive win, one that takes him off the bottom.

Michael Smith averaged 107 in defeat in his first game since the restart, so will be pleased just to get the two points thanks to a 7-3 defeat of Rob Cross. ‘Bullyboy’ took a 3-0 lead only to be pegged back to 3-3, but then reeled off four straight legs to move into the top four.

World number one Van Gerwen called Glen Durrant ‘boring’ after his win against Cross on Tuesday, but after the first four legs were shared, the three-time Lakeside champion took out 167 and never looked back.

Double 12 sealed a break of throw for 5-2, and that was followed by a 11-darter to leave MVG trailing in his wake. The Middlesbrough man sealed the victory 7-3 to continue his dream Premier League debut and go onto 12 points.

The final game of the night saw Peter Wright see off challenger Jeffrey de Zwaan with ease. The Dutchman’s only leg came early on, and from there, he could hardly lay a glove on the World Champion as he finished superbly to wrap up a 7-1 success and finish the night in 3rd place, only behind Van Gerwen on leg difference.

There are five more games on Thursday as the first phase of the tournament is completed with ‘Judgement Night’.

So Glen Durrant reclaims his place at the top of the table, and Rob Cross is staring elimination in the face ahead of Judgement Night…#Unibet180 pic.twitter.com/mTt0eNl2VF