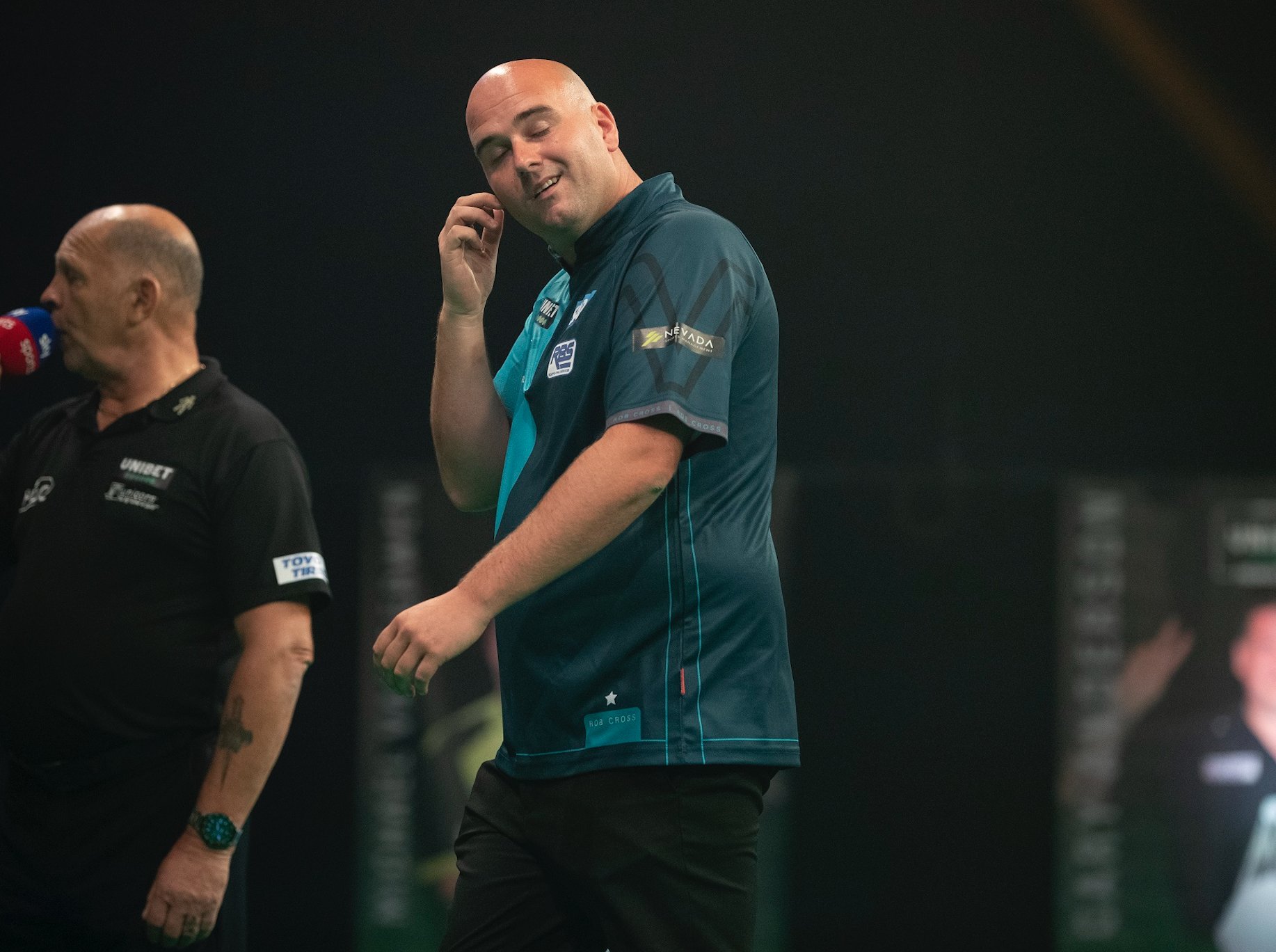 Rob Cross was eliminated from the Premier League on Thursday’s Judgement Night following a 7-4 defeat to table-topper Glen Durrant in Milton Keynes.

Former world champion Cross failed to secure a single point post-lockdown – which ultimately proved pivotal in him finishing rock bottom and departing at the first hurdle.

Cross has now been unable to claim a televised victory since the resumption of the professional season, while Durrant continued his remarkable Premier League debut and strengthened his lead at the top of the table.

After drawing with world champion Peter Wright and beating world number one Michael van Gerwen, ‘Duzza’ raced into a 4-0 lead with a magnificent 167 checkout on the bullseye.

Cross then squandered multiple darts on the doubles, with Durrant subsequently pinning tops and moving the Hastings man on the brink of elimination.

Cross would tease a comeback, reeling off three in succession with finishes of 81, 90 and 124, but his luck stopped there as Durrant claimed two of the next three to wrap up a hard-fought victory, with both men averaging over the 103 mark.

Meanwhile, Daryl Gurney was left bitting his finger nails in the culminating encounter of the night, following a disappointing 7-4 defeat to an impressive Wright.

Gurney’s great escape was completed come the conclusion of Judgment Night, but the Northern Irishman was in need of a Durrant victory after losing three legs on the spin against the reigning world champion.

Both players held their throw with expertise in the early stages, before Wright pinned a stunning 10-dart leg on double six, missing double 12 for his maiden televised nine-darter in the process.

‘Superchin’ clinched two of the next three legs to level at four apiece, before Wright found two 14-darters at an all-important period in the match to run away with the points.

Elsewhere, after being downed by Durrant on Wednesday evening, defending champion Van Gerwen succumbed to his second successive defeat at the hands of two-time world champion Gary Anderson.

Anderson was thrashed by Gerwyn Price a night earlier, but turned the tables in order to record four maximums and an average just spare of the 100 mark in a relatively comfortable win over the three-time world champion.

The Scotsman missed a number of attempts on the outer ring at the outset, but later misses from Van Gerwen proved costly as the Dutchman dropped to fourth in the table.

Debutant Nathan Aspinall leapfrogged the world number one as he produced a remarkable comeback to see off fellow North West of England star Michael Smith.

Aspinall trailed 5-3 by virtue of some staggering scoring from Smith, but pegged back the former World Championship finalist with legs of 12 and 13 darts.

Smith then missed a dart at the bullseye for a 121 checkout, allowing Aspinall to convert 41 in three darts and secure an almost improbable draw.

Aspinall proceeded to once again punish Smith for more misses, pinning double eight after eight squandered darts at double from his opponent, snatching both points and moving to second in the standings.

Gerwyn Price thrashed Challenger Jermaine Wattimena 7-0 as the Welshman averaged in excess of the 102 mark against a well below-par Dutchman.

Price dashed to the finish line in under 15 minutes, converting mesmerising checkouts of 114 and 164 on his way to an effortless victory – which saw him expectedly avoid elimination.

Premier League Darts resumes on Friday evening as the second phase of the extravaganza commences, featuring a mouth-watering clash between Van Gerwen and Aspinall.

❌Rob Cross is eliminated on Judgement Night, whilst Glen Durrant increases his lead at the top of the table.

Defeat for Michael van Gerwen sees him drop down to fourth and four points off top spot. Work to do for the reigning champion!#Unibet180 pic.twitter.com/gcqTFPeEP8