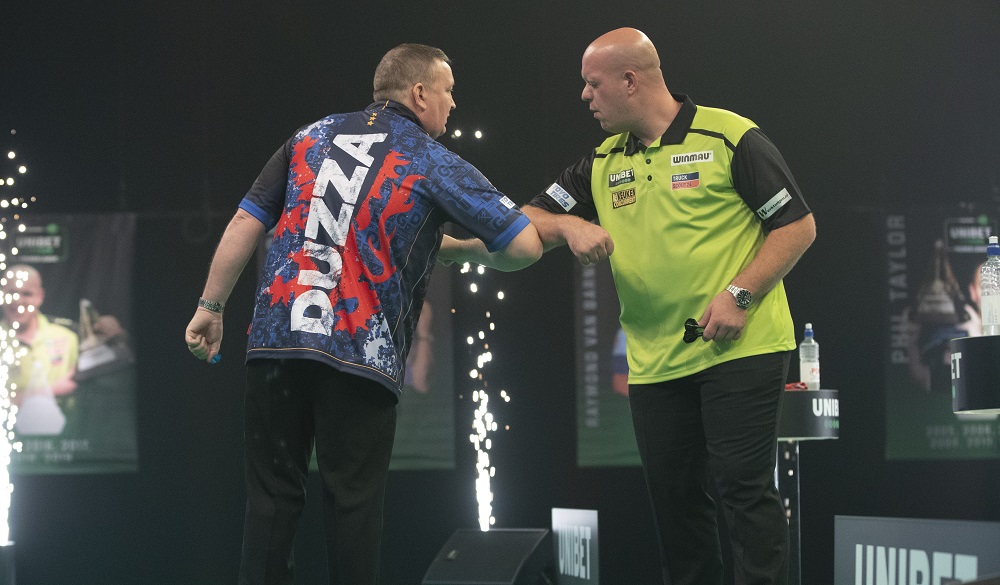 Michael van Gerwen aims to beat Glen Durrant for the first time on Night 14 of the Premier League as he looks to revive his bid for the London Play-Offs.

It is now all but guaranteed that Van Gerwen will finish below top spot for the first time in his eight-season Premier League career.

‘Duzza’, his opponent on Thursday, just needs a couple more points to seal that accolade for himself, which would be some achievement for a debutant.

Elsewhere on Night 14, Gerwyn Price takes on Daryl Gurney and Michael Smith faces Gary Anderson, with ‘The Iceman’ and ‘Bully Boy’ in desperate need of points in order to reach the top four.

It is a good opportunity for them as at least one of Peter Wright and Nathan Aspinall will drop points due to the fact that they are playing each other.

Northern Irishman Gurney’s play-off hopes are hanging by the thinnest of threads, so much so that even three 8-0 wins from here likely wouldn’t prove enough.

As a result, there is little pressure on him in the first game of the evening. His opponent, 6th-placed Price, is in a very different circumstance, just one point off the top four.

‘Superchin’ hasn’t really been able to rediscover the form that saw him avoid elimination after the first phase, while Welshman Price lost narrowly to Aspinall on Wednesday after two straight wins.

Two-time champion Anderson sits comfortably inside the top four, but contrastingly, Smith squandered a 7-2 lead against Durrant on Wednesday to leave him languishing down in 7th.

Both have found spells of electric scoring during the last week in Milton Keynes, but have also found finishing difficult at times, so this one could be an absolute classic with 180s galore but could also be a tense battle with missed doubles crucial.

In fact, they met in the very first game after the restart and it was one of the best clashes at the Marshall Arena so far, arguably second only to an enticing clash between Peter Wright and Daryl Gurney.

Smith averaged 107 in that one and could only manage three legs, so will be hoping to improve his doubling against ‘The Flying Scotsman’ for a first win in four.

Wright’s fourth consecutive ton-plus average was finally converted into a win on Night 13, and in some style as he demolished world number one Van Gerwen 8-1.

The World Champion now holds the highest tournament average of anyone, but sits down in 4th, testament to the high standard in this year’s Premier League.

‘Snakebite’ only sits above MVG on leg difference, so needs to keep his foot on the pedal against Aspinall.

‘The Asp’ beat Price 8-6 on Wednesday to continue his unusual streak of win-loss-win-loss and currently sits in 3rd.

When three-time BDO world champion Durrant went to Qualifying School eighteen months ago, it was to try and test himself against the best.

He still sees Van Gerwen as the best players in the world, but has an outstanding record against the Dutchman so far, winning three out of three, including a 7-3 success in Milton Keynes a little over a week ago.

The world number one has lost four of his seven games since the restart, and needs to find some form just to finish in the top four and give himself a chance of a fifth straight title.