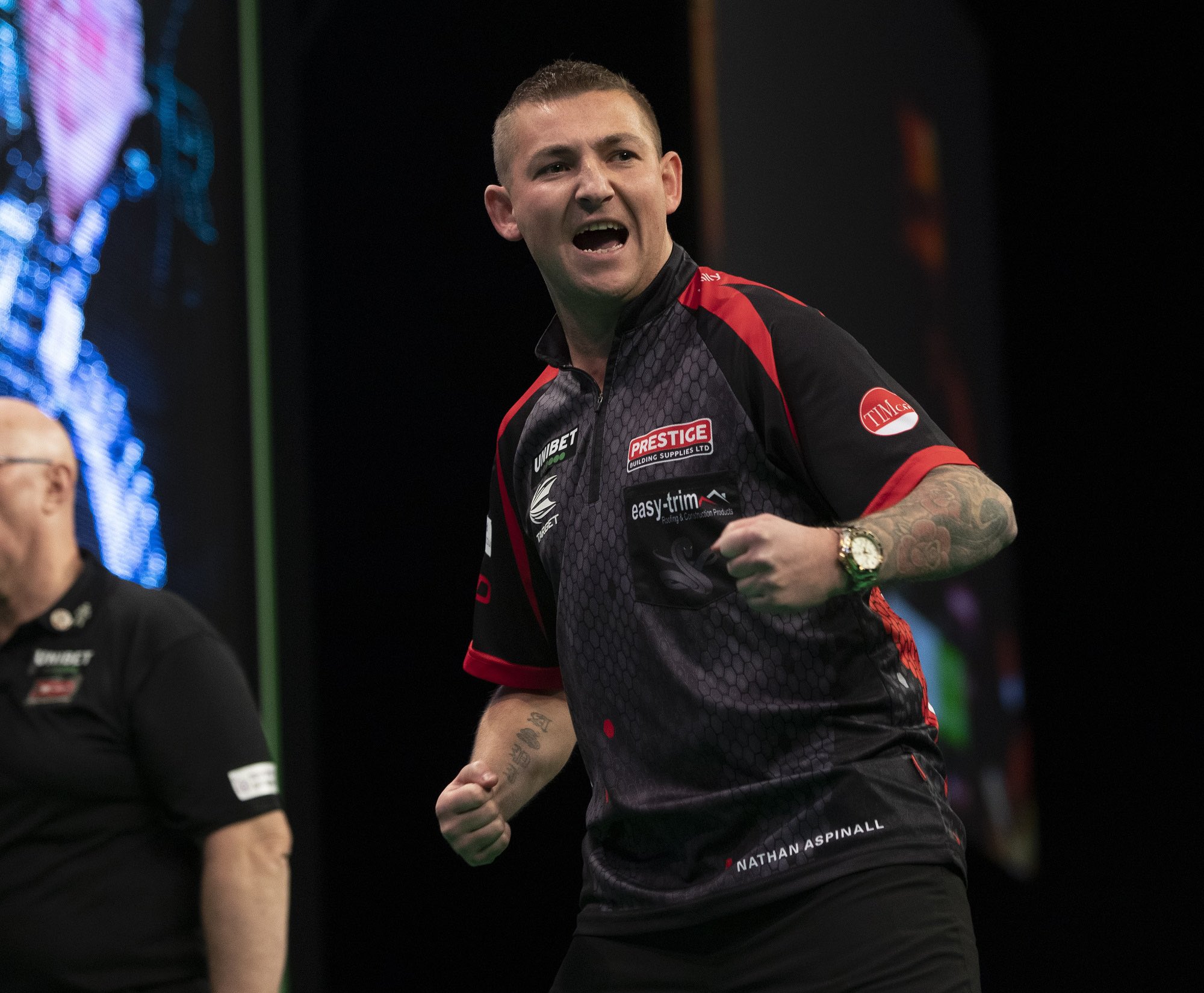 Nathan Aspinall is currently number four in the standings of the Premier League with seven points to his name.

Allow us to guide you through Aspinall’s season so far, remaining fixtures and his chances of reaching the Play-Offs come the early days of September.

Nathan Aspinall started his second appearance, after being a contender last year, with a 7-3 win over John Henderson.

In the second week, Aspinall played a below-par match and lost against Rob Cross, before returning to form with a handsome 7-5 victories over world number one Michael van Gerwen and former UK Open champion Nathan Aspinall.

Night Five was played in Exeter, with Peter Wright being the opponent of Nathan Aspinall. The world champion defeated ‘The Asp’ 7-3 with an average of 110, while Aspinall ended on 99.67 in a thriller.

The culminating week prior to the lockdown was played in Liverpool, with two-time world champion Gary Anderson being his opponent. After being 5-1 behind, Aspinall battled back and produced a 6-6 draw with an impressive average of 107.64.

Despite failing to return to the winners’ circle during the PDC Summer Series in early July, Nathan Aspinall reached one quarter-final and one semi-final.

In the remaining three tournaments, Aspinall reached the last 32 twice and one last 16. ‘The Asp’ pocketed a substantial £7,750 cheque in Milton Keynes.

The World Matchplay wasn’t to be for Nathan Aspinall, just like last year he was defeated in the early stages. In the first round, Dimitri van den Bergh defeated Aspinall 10-5, and a week later won the tournament on debut!

Tuesday will see Nathan Aspinall will restart his Premier League campaign against Gerwyn Price, with both players needing the points for an eventual a for the Play-Offs.

He will then meet Daryl Gurney, who is currently at the foot of the table and fighting to avoid elimination.

On Judgement Night, Michael Smith will be Aspinall’s opponent. ‘Bully Boy’ has the same amount of points of Aspinall at the moment, with the match being a crucial one in the race towards the Play-Offs.

The last tournament wasn’t a successful one for Aspinall, but after a small break, he is back on the practice board for some great matches during the restart of the Premier League.

He is currently fourth in the standings, but at the moment all players are extremely closely matched, with the top five all being within two points of each other.