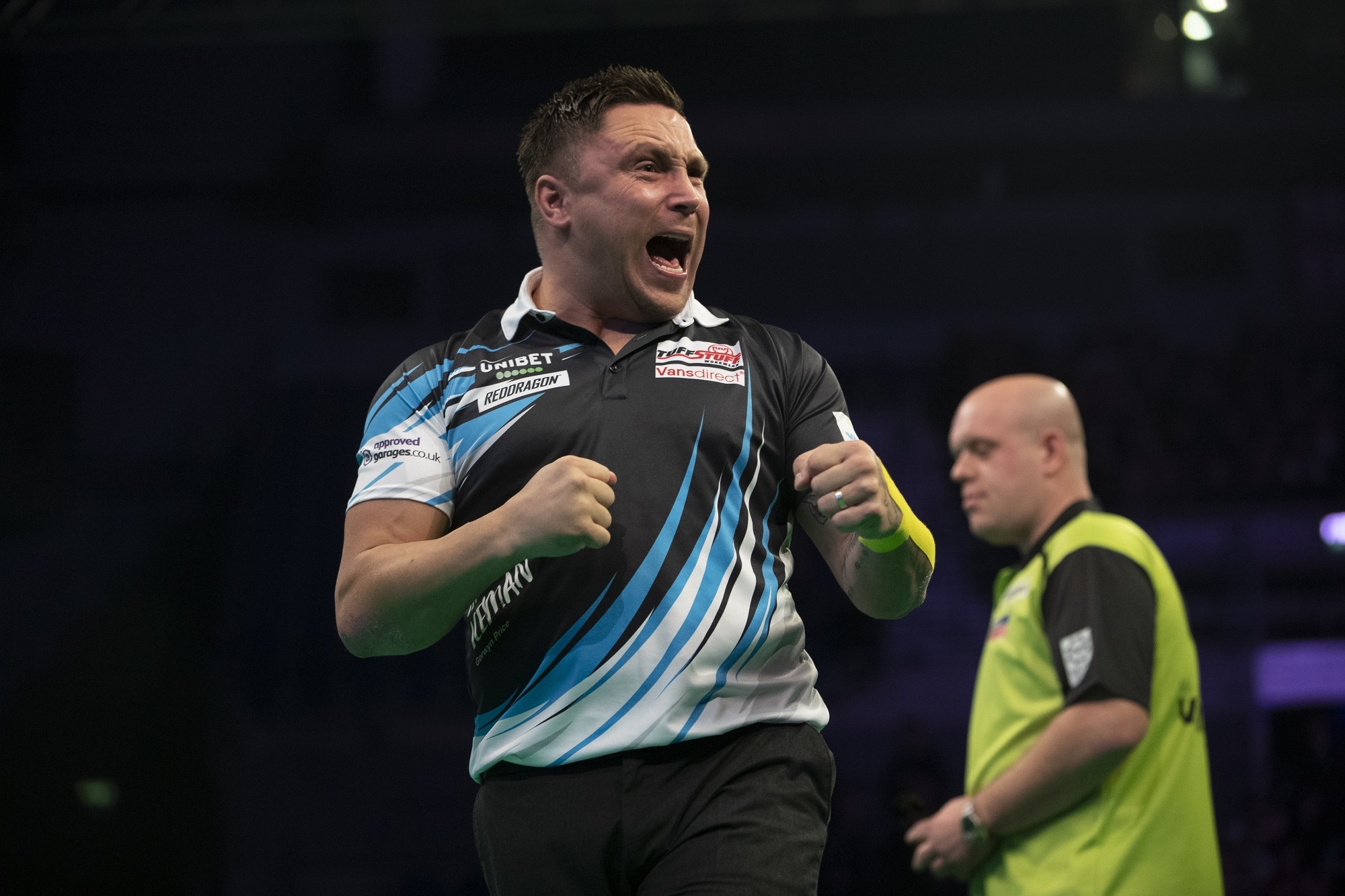 Pantomime villain Gerwyn Price will be hoping to emerge from the mid-table pack and secure himself a coveted place in the Premier League Play-Offs when the league phase resumes on Tuesday in Milton Keynes.

The current world number three was an automatic pick for the tournament and will be hoping to back up his world ranking by securing a Play-Offs berth.

Allow us to guide you through Price’s season so far, his upcoming matches and his chances of reaching the Play-Offs come the early days of September.

Before the enforced hiatus, Price had struggled to string together wins in the Premier League and his campaign was very much a stop start affair.

The Welshman only managed to pick up one 7-1 victory over an out-of-sorts Peter Wright and was defeated by Michael van Gerwen and league leader Glen Durrant.

Price secured draws against Rob Cross, Michael Smith and Daryl Gurney, failing to average above 100 in any of these matches will be a slight concern to ‘The Iceman’.

On the other hand, Price has managed to keep picking up points to leave himself in the hunt for a Play-Offs place which shows a good level of mental fortitude.

Additionally, Price will need to up his checkout percentages to be in with a shout of a top four position, having hit the 50 per cent mark only once in his defeat to Van Gerwen.

‘The Iceman’ had a solid Summer Series, reaching one final and picking up a total of £10,000 in the process.

Over the course of the five events, Price had a rolling average average of 100.7 in 16 matches played, and averaged over 110 twice in a very impressive performance overall.

Despite his developing pedigree, Price has never appeared in the London Play-Offs (Photography: Taylor Lanning)

In comparison, the Welshman had an extremely disappointing Betfred World Matchplay campaign, exiting at the first hurdle in a 10-7 defeat at the hands of Danny Noppert.

Worryingly, Price only recorded an average of 90.73 against the Dutchman, and will be hoping to bring his ProTour form into the Premier League.

The back-to-back Grand Slam champion has some tough assignments to end the first phase of the Premier League.

Price faces off against fellow play-off hopefuls Gary Anderson and Nathan Aspinall, and will be hoping to exact revenge on both former major champions after losing his previous meeting against the two.

Price then plays Dutch Challenger Jermaine Wattimena on Judgement Night, with the two-time Grand Slam of Darts champion hoping he is well clear of elimination before facing ‘The Machine Gun’ in his final first phase fixture.

Price’s hopes of reaching the Play-Offs will rely on a strong restart to his league campaign. Victories against fellow top four hopefuls Anderson and Aspinall will be vital to any potential play-off push.

More consistent performances to mirror the Welshman’s ProTour form will be the key to picking up points on a regular basis.

Price should be confident that strong performances will help him gatecrash the top four, and his next three fixtures will be imperative to these chances.