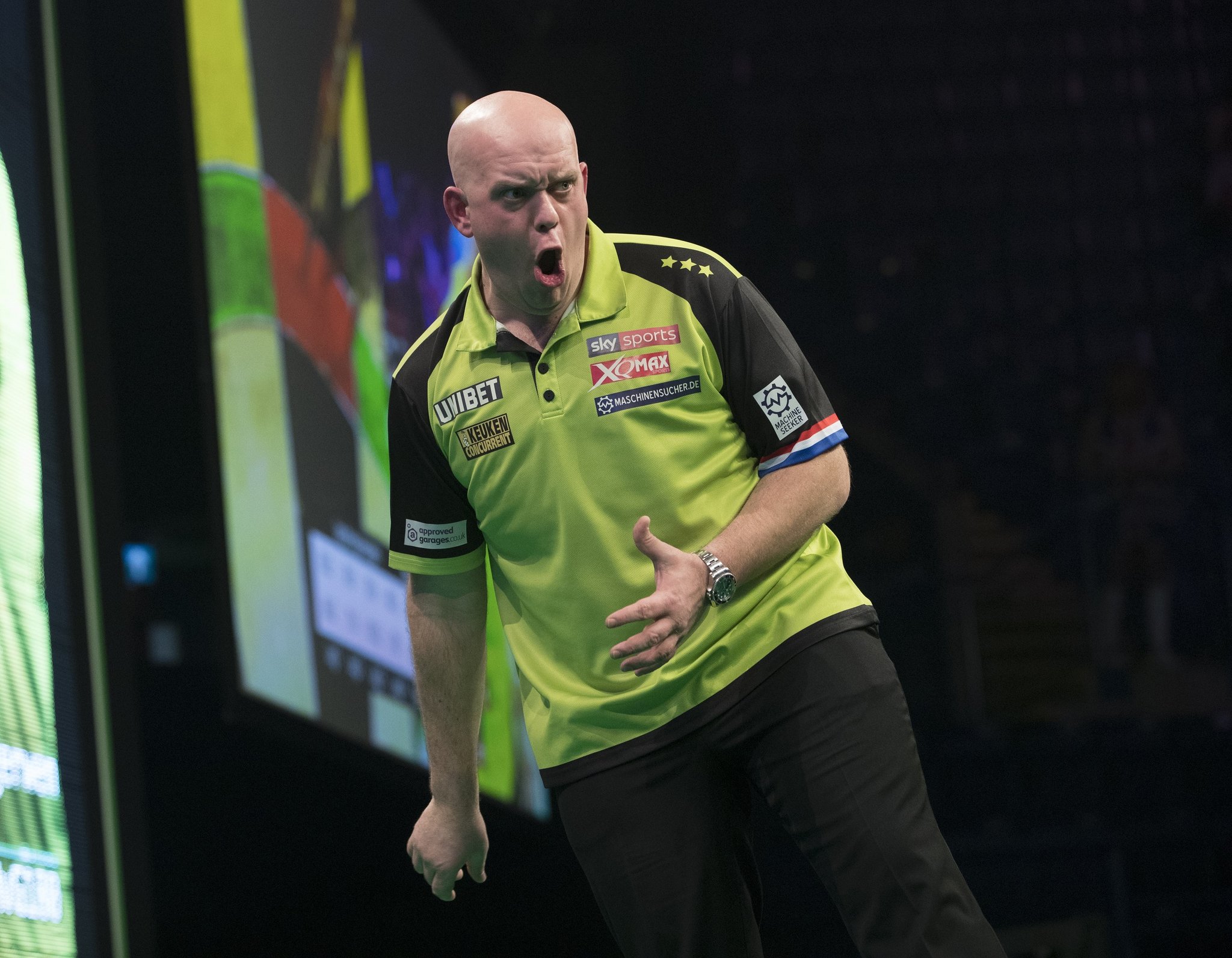 Five-time Premier League champion Michael van Gerwen has his work cut out to finish top of the league phase for the eighth consecutive year.

‘Mighty Mike’ lost to both Nathan Aspinall and Michael Smith before the break and sits second as a result, behind Glen Durrant.

More disappointment at the World Matchplay means Van Gerwen will be desperate to retain the Premier League title, whether it be in Milton Keynes or at London’s O2 Arena.

We guide you through the Dutchman’s campaign so far, his recent form, and his chances of making the Play-Offs, taking into account his remaining fixtures.

Van Gerwen got off to a flying start in Aberdeen and Nottingham, seeing off Peter Wright and Daryl Gurney and averaging over 104 in both matches.

That was a look at the old MvG, who once went on an incredible run of 36 Premier League matches without a sub-100 average.

However, he succumbed to an excellent Aspinall performance in Cardiff and lost 7-4 to Smith in Exeter, either side of a fairly routine win over Challenger William O’Connor in Dublin.

The last game before the break saw the world number one produce a 106 average in defeating Gerwyn Price to see him handily placed going into the rest of the tournament.

‘Mighty Mike’ got off to a winning start at the Summer Series, collecting his first ProTour title of the season by beating Peter Wright 8-7 in the final of Players Championship Nine.

He also saw off José de Sousa to win PC11, but three early defeats in the other events put a dampener on van Gerwen’s week in Milton Keynes.

The three-time World Champion returned to Buckinghamshire with the aim of winning the World Matchplay for the first time in four years.

However, he made hard work of his first round tie with Brendan Dolan, before failing to recover from a 5-0 deficit against Simon Whitlock and departed before the quarter-finals of the Matchplay for a third straight year.

Van Gerwen resumes his campaign on Tuesday against Rob Cross, a player the Dutchman has beaten all six times they’ve met in the Premier League.

He then meets Glen Durrant looking for his first win against the Teessider. ‘Duzza’ got the better of Van Gerwen twice in 2019, in the World Matchplay and in Players Championship 15.

‘Mighty Mike’ will round off the first phase of his season against two-time world champion Gary Anderson on Thursday.

It would be a major shock if Van Gerwen were even to miss out on topping the table for the first time, so him missing out on the Play-Offs would be seismic.

However, the world number one has already come across as slightly vulnerable in the last 18 months or so, and is certainly struggling to find the consistent level of the years beforehand.

His defeat to Simon Whitlock at the Matchplay was a perfect example of that, and although Van Gerwen won’t need to be perfect to finish in the top four, it’s certainly not the done deal it has been in the past.