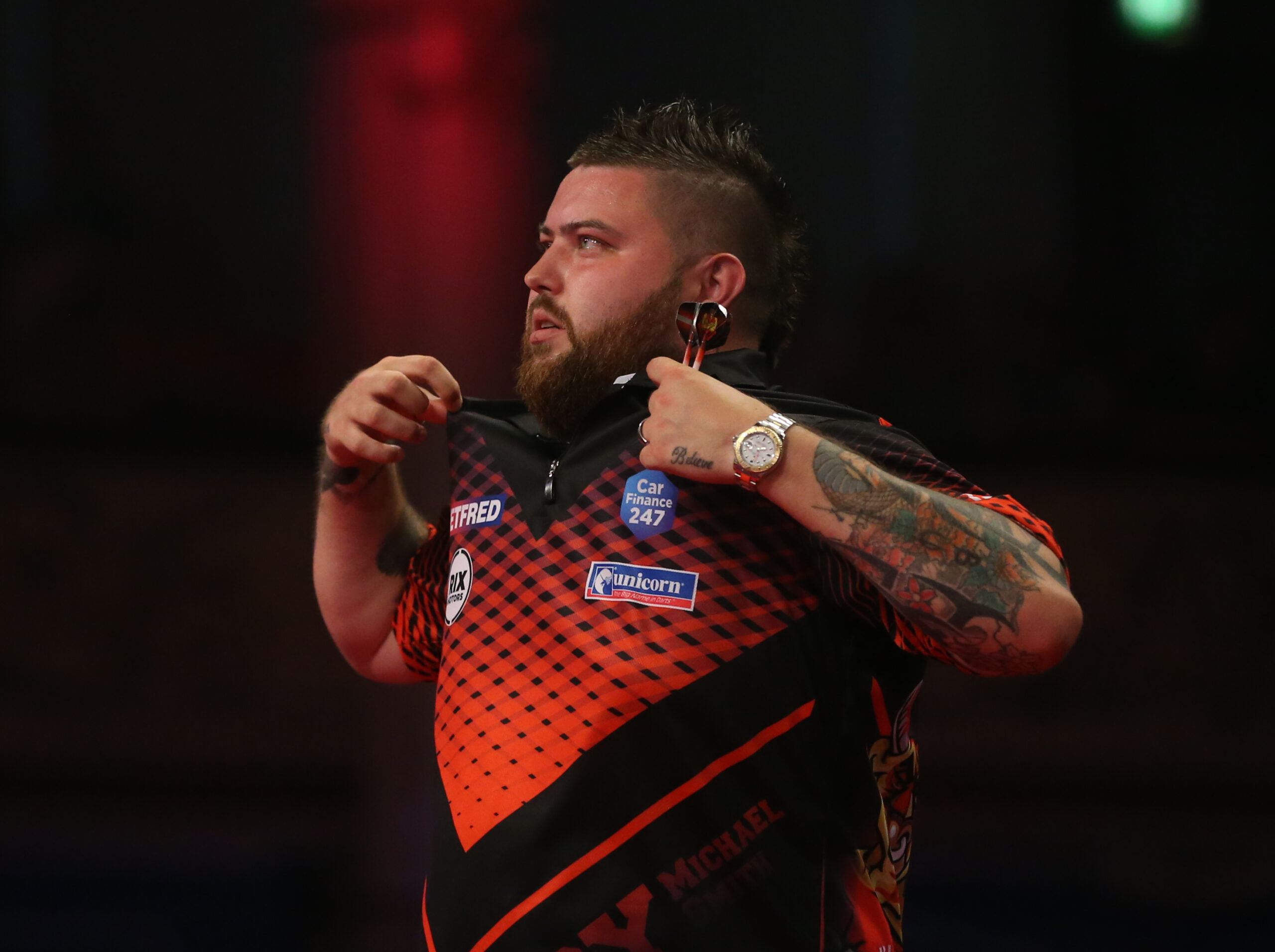 Michael Smith is currently third in the standings of the Premier League with seven points, and resumes his bid for a maiden huge televised title on Tuesday evening in Milton Keynes.

Allow us to guide you through Aspinall’s season so far, remaining fixtures and his chances of reaching the Play-Offs come the early days of September.

Michael Smith didn’t enjoy a great start to his Premier League campaign. He was beaten in his first match 7-3 against Glen Durrant, before squandering a 6-2 lead against Gerwyn Price and being forced to settle for a draw.

On Night Three, Smith played against Challenger Jonny Clayton. With an average of 105.51, ‘Bully Boy’ defeated the Welshmen 7-1, prior to producing his first ever televised nine-darter in a 7-5 win over Daryl Gurney.

During Night Five in Exeter, Smith was too strong for world number one Michael van Gerwen, before being handed his second loss of the campaign against world champion Peter Wright.

Despite failing to return to the winners’ circle during the PDC Summer Series in early July, Smith reached the quarter-finals on only one occasion.

After enjoying a solid start to his Summer Series campaign, the Englishman endured a first round exit, where former BDO World Championship finalist James Wilson proved too strong. In the remaining three tournaments, Smith lost in the third round of proceedings.

At the end of the Summer Series, Smith pocketed a £5,250 cheque in Milton Keynes.

The World Matchplay was once again a success for Michael Smith. After losing in the final to Rob Cross last year, he reached the semi-finals on his eighth appearance.

He started with a comfortable 10-3 win over Jonny Clayton, before battling back from 8-5 behind to beat Mensur Suljovic 14-12 in a tie-breaker.

In the quarter-finals, Krzysztof Ratajski was Smith’s opponent. ‘The Polish Eagle’ hung on for a long time, but in the end, Smith did the job and prevailed with a hard-fought 16-13 win.

He proceeded to exit at the semi-final hurdle at the hands of his former mentor Gary Anderson. The Scotsman led 14-9, but Smith bounced back to 15-14, before Anderson closed out a 18-16 victory in a tie-breaker.

Michael Smith will play on Tuesday against Gary Anderson. Will he get his revenge after the semi-finals of the World Matchplay?

The St Helens man will then face former world champion Rob Cross – who is standing eighth at the moment and isn’t safe from elimination.

Nathan Aspinall is the opponent on Judgement Night, with Aspinall having the same amount of points as Smith at the moment. This could prove be a crucial match in the race for the Play-Offs.

Smith will restart the Premier League with a lot of confidence after reaching the semi-finals of the World Matchplay and will fancy his chances of making the Play-Offs.

At the moment, he is third in the standings, and made the final two years ago. He knows that it is possible to win this tournament, but at the moment all nine players are relatively tightly knitted.