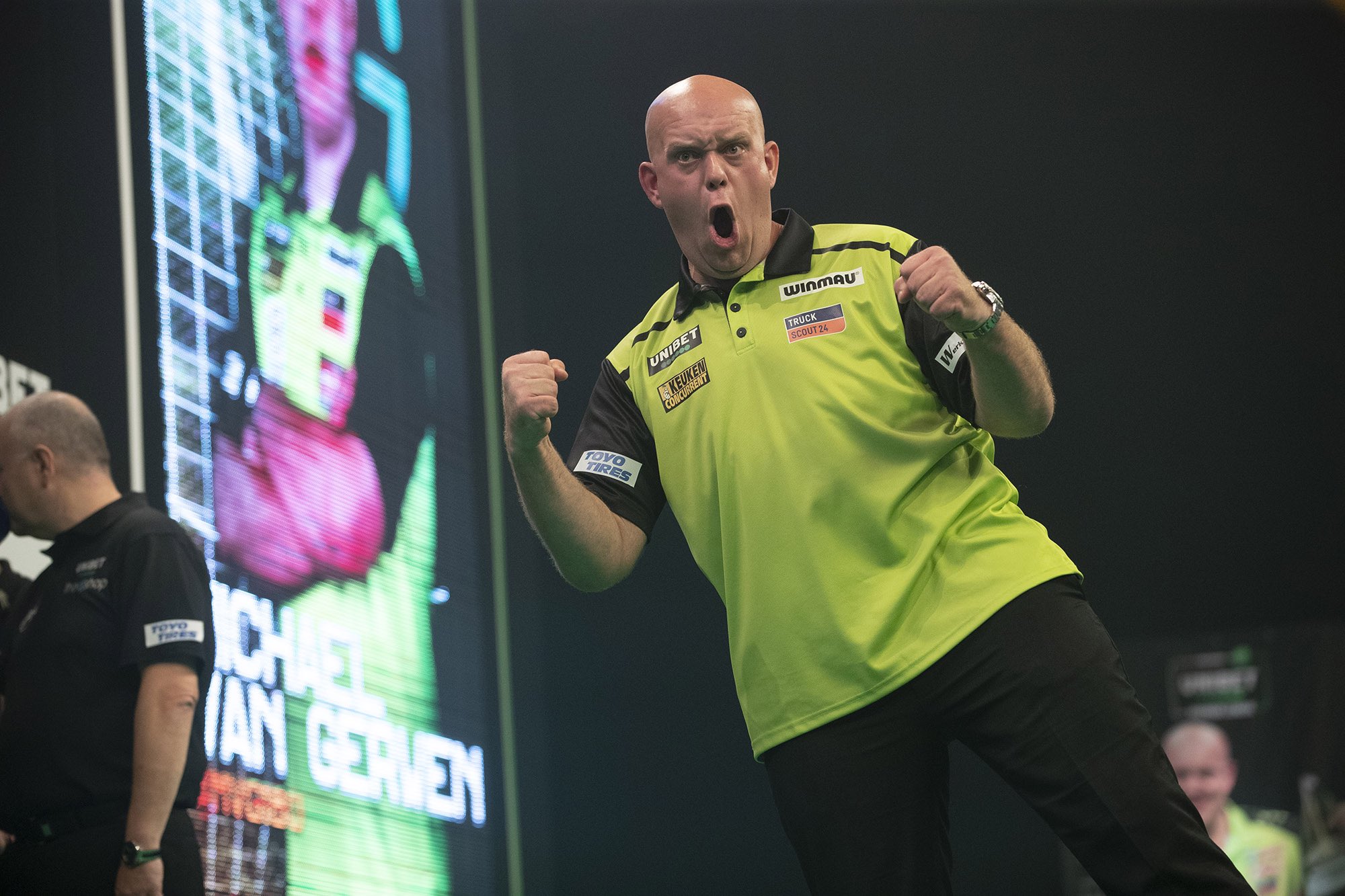 Michael van Gerwen kept his play-off hopes alive with a 8-6 victory over Gary Anderson on Night 15 of the Premier League at the Marshall Arena in Milton Keynes.

The world number one came through a closely contested encounter against ‘The Flying Scotsman’, which ebbed and flowed throughout.

He will still need to rely on other results after wins over Nathan Aspinall, Peter Wright and Gerwyn Price with four players looking to sneak into two spots.

Van Gerwen raced out of the gates the quicker of the two, and roared his way to a 5-2 lead midway through. With the chance to make it 6-2, the Dutchman missed darts at double with Anderson capitalising to close the gap.

A run of four legs in a row saw the Scotsman take a 6-5 lead and seemingly in cruise control to take charge of proceedings.

But, the Dutchman wasn’t going to give in easily and as Anderson missed double tops for a 145 finish in leg 13 ‘Mighty Mike’ managed to hit double 16 for a 7-6 lead.

And he would finish the job off a leg later, sealing an 8-6 win with an average of 103.

‘Duzza’ looked below-par and ‘Snakebite’ capitalised on an off night against the three-time BDO World Champion.

The game went with throw until leg seven when Wright took the lead for the first time. That break proved crucial as every other leg went with throw and despite Durrant missing a chance to draw the game with a 112 checkout, Wright pinned double one to down the form horse this season.

The man who currently occupies the final play-off spot is Nathan Aspinall who beat Daryl Gurney 8-5, with the Northern Irishman already rooted to the foot of the table.

Aspinall raced into a 3-0 lead before being broken twice in three attempts to be brought back to 4-4.

At five apiece, ‘Superchin’ missed four darts at double to take the lead, with the former UK Open champion then hitting double 16 to take full advantage with a break of throw.

Then, the Stockport thrower would reel off the next two legs to see off Gurney 8-5 and help his cause for a play-off campaign in his debut year.

Michael Smith and Gerwyn Price produced the performances of the night in a scintillating match, with a 7-7 draw to see off Friday evening’s action.

There was 14 maximums, one per leg on average, in a superb display of scoring between the two, with Smith hitting nine of them himself in a high-scoring affair.

Smith was in the driving seat for most of the match, leading virtually all the way, before Price clawed him back on the line to seal a crucial point which keeps the Welshman’s hopes of maiden O2 appearance alive.

Things have gotten even closer! Who will join Glen Durrant in the Play-Offs?

Not even Gary Anderson is safe in second place… Tomorrow night has it all riding on it!#Unibet180 pic.twitter.com/KAQN2XL9ky