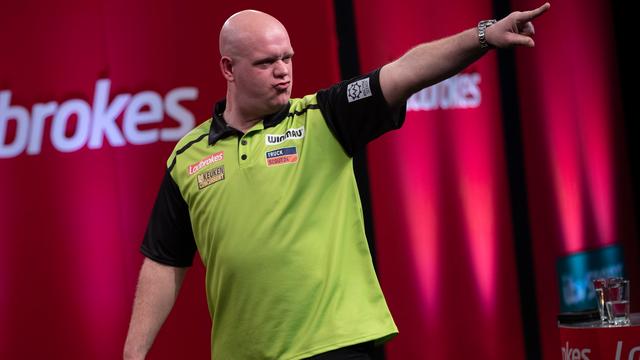 Gerwyn Price and Michael van Gerwen will go head to head in a repeat of Sunday’s UK Open final as the Premier League Darts heads to Liverpool.

Van Gerwen beat the Welshman 11-9 when the pair met at Butlins Minehead at the weekend.

Elsewhere world champion Peter Wright will take on Michael Smith whilst this week’s challenger will take on Rob Cross.

World Champion Peter Wright heads to Liverpool looking to try and push himself up the table as he takes on an in form Michael Smith.

The bully boy is currently second in the table, level on points with leader Glen Durrant.

Wright is sat 7th in the Premier League table, but such is the congested nature of this year’s competition is just one point of the play off places.

Snakebite won last time out against Aspinall 7-3 with a 110 average.

Glen Durrants dream start to life in the Premier League sees him top of the table coming into night six of the competition.

And it is a battle of top v bottom in the table as he faces Daryl Gurney who could get set adrift if he loses again.

Superchin May have made the semi finals of the UK Open on Sunday, but is three points of Rob Cross with just three games to go until judgement night, and that is reliant on whether the Coronavirus outbreak stops that event in Rotterdam.

Gurney has picked up just two point so far this campaign.

As for Duzza he has amassed 7 points so far, and with elimination seemingly an issue that for him won’t need resolving he can now fully focus his effort in making finals night at the O2.

Gerwyn Price will be looking to avenge his UK Open final defeat on Sunday when he takes on Michael Van Gerwen.

And what better way to get over that disappointment than to face him on the big stage a matter of days later.

Van Gerwen has already lost twice in his first five games and with an unblemished record when it comes to finishing top of the table, he will want to keep that record in tact, meaning slip ups are not needed.

Stephen Bunting returns to Premier League action after a five year absence when he faces Rob Cross in Liverpool.

Bunting was selected when he first joined the PDC after winning the 2014 BDO World Darts Championships.

Against him Rob Cross who will be looking behind his shoulder with him just two points clear of Daryl Gurney.

One advantage for Cross will be that he is playing after the Irishman meaning that he will know the outcome of his game before he toes the Oche.

This game could easily go under the radar and certainly shouldn’t.

Nathan Aspinall, despite defeat to Snakebite last time out, has also enjoyed a strong Premier League debut and he takes on Gary Anderson next.

Anderson has had a campaign of mixed proportions so far, he finds himself sixth but two points off that fought and final play off spot.

The pair have had some big clashes in recent times, with the most notable being in the World Championships when Aspinall ran out the winner.