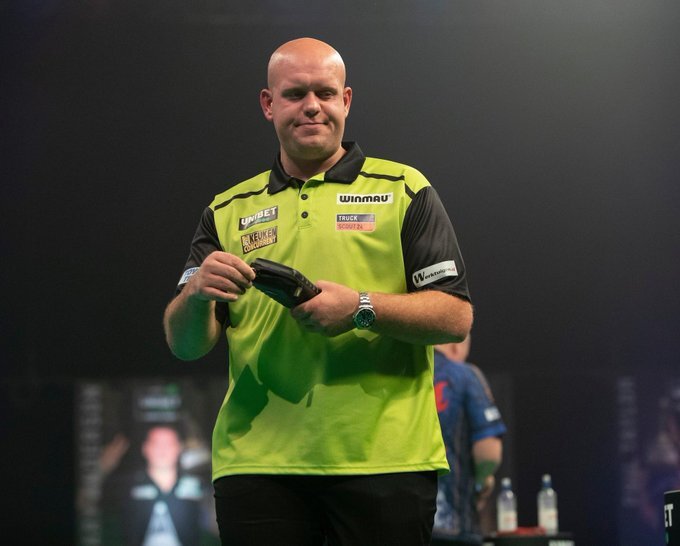 Michael van Gerwen was beaten heavily by Daryl Gurney on his way out of the Premier League as Peter Wright, Nathan Aspinall and Gary Anderson all qualified for the semi-finals.

Five-time champion Van Gerwen had topped the league phase on every single one of his previous appearances, making his eventual 6th place finish even more incredible.

The race to qualify for next month’s playoffs went down to the final night in Milton Keynes, and after Gerwyn Price played excellently against Gary Anderson, winning 8-3, the pressure was firmly on Van Gerwen and Nathan Aspinall.

MVG seemed to struggle significantly with that burden and lost the first six legs to the eliminated Gurney, and 8-2 margin of defeat saw Wright and Anderson through.

The World Champion’s win over Michael Smith guaranteed him 2nd place, before Aspinall produced an outstanding display to beat table-topper Glen Durrant 8-2 and reach for the play-offs on debut.

An incredible achievement for both players as ‘The Asp’ continues his meteoric rise from almost giving up on this day in 2018, while ‘Duzza’ became only the third man to top the league phase after Van Gerwen and Phil Taylor.

Welshman Price’s aforementioned win against Anderson came with a 107 average and a 57% checkout success. Despite an apparent arm problem for the two-time World Champion, ‘The Iceman’ did all he could and ended the season in 5th.

Van Gerwen didn’t produce a score of 140 or more until the sixth leg of his match with Gurney, and that tells the whole story. A 121 finish for a 12-darter was the highlight for Gurney as he stormed into a 6-0 lead, before running out an 8-2 winner.

After topping the table after seven nights, MVG’s catastrophic form since then has cast serious doubt over his ability to retain the world number one ranking. Although we have seen this before and he has bounced back before, this time seems different as the Premier League is where he has done so well over the years.

Wright and Smith didn’t have too much to play for in the third game of the evening, and it was ‘Snakebite’ who completed an 8-5 success with a 97 average.

He will play Nathan Aspinall in the O2 semi-finals after ‘The Asp’ found a superb performance on the doubles, 8/13 to be precise, to blow away Durrant 8-2. The Stockport thrower also had a 170 finish, matching Gary Anderson’s in his match with Price.

Aspinall will play Wright in the last four after finishing third

All that saw two weeks of dramatic Premier League action in Milton Keynes come to a close, with the playoffs set for Thursday, 22 October.

Before that, the PDC action comes thick and fast with the Autumn Series, World Series Finals and World Grand Prix as well as the return of the European Tour.