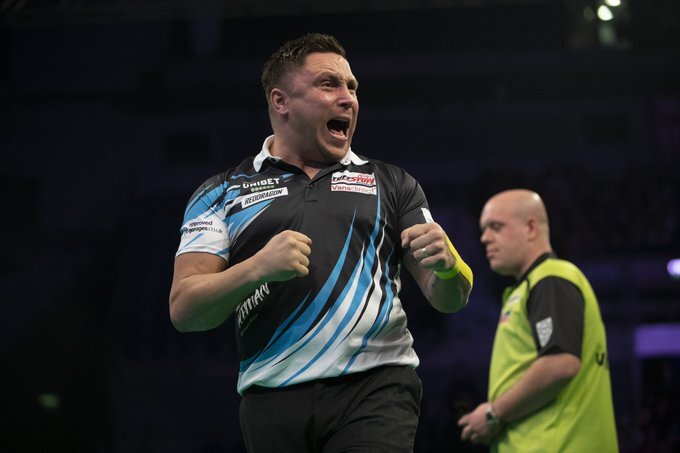 Wright nailed the nine in leg 11 for the 10th perfect leg in Premier League history and the 2nd this year alone. However, he lost the match 8-6 despite averaging eight points more than his Northern Irish opponent.

Night 11 of the 2020 Premier League began with an all-time classic match between Gurney and Wright with the World Champion hitting 9 180s and ‘Superchin’ taking out 164 and 141.

Gurney stormed into a 4-0 lead averaging 107, a shock scoreline given his performances in defeat on the previous two nights, but Wright stormed back with four of the next five legs to trail 5-4.

Arguably, the next leg saw the turning point as the former World Grand Prix champion pinned a 141 checkout to stop the rot. After the nine-darter, ‘Snakebite’ missed darts to win both of the last two legs and fell to a narrow defeat.

Michael Smith and Nathan Aspinall always seem to produce exciting games, and this one was no different despite plenty of missed doubles.

The first six legs were shared before ‘The Asp’ found his game to move 5-3 ahead, only for former runner-up Smith to peg him back again at five apiece.

The St Helens thrower managed to hang on until the very last leg, when Aspinall took out 94 for a crucial 8-6 win that eventually saw him end the night in 2nd.

Glen Durrant extended his unbeaten Premier League run to seven against Gary Anderson, but it looked like the Scotsman would win to go two points behind ‘Duzza’ for much of the match.

The two-time PDC World Champion flew out of the blocks, but back-to-back checkouts of 138 and 117 from Durrant made it 3-3.

Anderson then reeled off four straight legs to go to the brink. However, he couldn’t close it out, missing rafts of match darts and the Middlesbrough man somehow managed to scramble a draw.

There was yet another fast start in the final match of the night, with world number three Price producing back-to-back 12-darters to lead Van Gerwen 4-1.

MVG came back from 4-1 down to win on Friday, but the Welshman made sure history didn’t repeat with finishes of 100 and 122 on the way to a vital 8-4 win.

The Premier League continues on Sunday with four more matches before a two-day break.