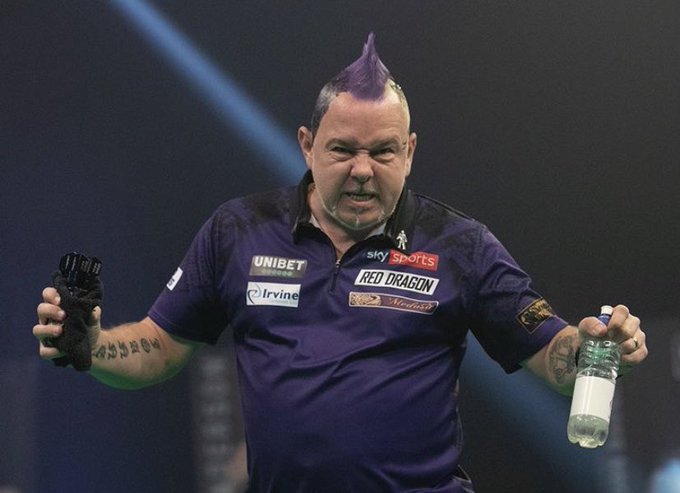 Peter Wright eased past an out of sorts Michael van Gerwen 8-1 in their crucial Premier League clash, while Nathan Aspinall beat Gerwyn Price 8-6, meaning that both 3rd and 4th place changed hands.

The action resumed in Milton Keynes after a two-day break, and World Champion Wright picked up his first points since Judgement Night following a series of narrow losses despite excellent performances.

The night began with runaway leader Glen Durrant taking on Michael Smith, and it was ‘Bullyboy’ who started much better, producing a 12-darter for a commanding 6-2 lead as he attempted to get two vital points on the board in a late charge for the play-offs.

The three-time Lakeside champion looked to be on the brink of his second league defeat at 7-2, but Smith missed three match darts in two different legs as Durrant incredibly reeled off five straight to snatch a draw and move onto 20 points.

Durrant and Smith had to share the spoils after a topsy-turvy game. Credit: Lawrence Lustig/PDC

After losing the first two legs to Daryl Gurney, Gary Anderson found top gear and won the next five legs in just 69 darts. Despite leading 6-2 and 7-3, ‘The Flying Scotsman’ struggled to get over the line.

He missed handfuls of match darts before double 14 did the trick in the final leg to seal an 8-6 win, a result that saw him end the night two points clear of Aspinall in 3rd.

The third contest of the night wasn’t much of a contest at all as world number one Van Gerwen came up with an increasingly common below-par display and Peter Wright trampled all over it.

The Scotsman won the first five legs, and after a slight blip in which he allowed ‘Mighty Mike’ 18 darts to get on the board, ‘Snakebite’ wrapped it up with back-to-back four-visit legs to win 8-1 and go into the play-offs, ahead of Van Gerwen.

A 125 checkout from Nathan Aspinall in the fifth leg of his game with Gerwyn Price was the first crucial moment in that one, but the Welshman didn’t let it affect him as he found a 121 in the next leg to reduce the deficit immediately.

Price broke throw in the tenth leg to make it 5-5, but couldn’t capitalise, failing to post a ton-plus score in the first four visits of the next leg. In the end, that cost him as Aspinall ran out an 8-6 winner with a 99 average.