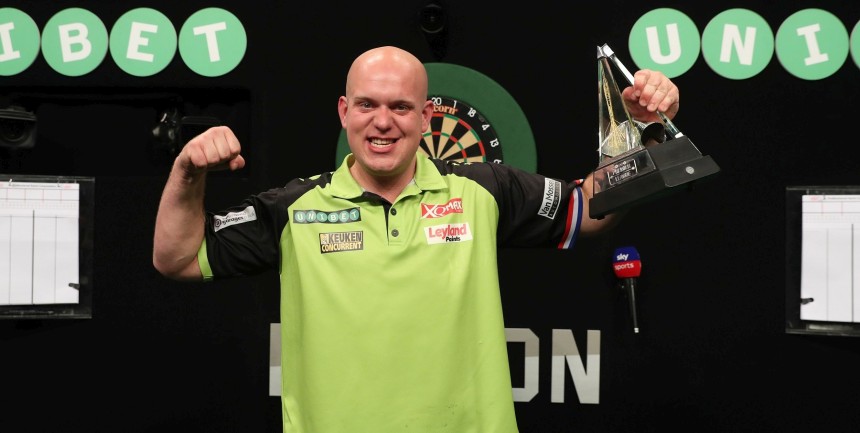 We will see a repeat of the World Darts Championship final on the opening night of the Premier League as the fixtures were announced for one of the PDC’s showpiece events, which gets underway on February 7 in Newcastle to kick-off seventeen thrilling nights of action.

Michael van Gerwen was perhaps fortunate to be crowned World Champion on New Year’s Day with ‘Mighty Mike’ seeing off Michael Smith 7-3, but the pair will renew rivalries at the Metro Radio Arena in a few weeks with James Wade and Raymond van Barneveld getting the event underway. The world numbers two and three also clash on the opening night, while week two sees Peter Wright take on Michael Smith and week three includes a mouth-watering Michael van Gerwen v Rob Cross match-up.

A controversial pick for many, five-time World Champion Van Barneveld appears to have a favourable start to his campaign as an opener with Wade is followed by meetings with Gerwyn Price and Mensur Suljović. The Dutchman’s Premier League career could end in Rotterdam if he finishes in the bottom two of the standings after nine weeks of play, with a tough ending to those fixtures with clashes with Gary Anderson and Michael van Gerwen waiting in the final three weeks.

Van Gerwen has finished top of the league every year he’s been selected for this event, and he’ll be hoping to win his fifth title this year and fourth in a row. His first game is also a rematch of last year’s Premier League final, which is quickly followed by tests against Suljović, Cross and Wade. In stark contrast to MVG’s scintillating World Championship success, Peter Wright had a very tough ending to 2018, but remains high up in the rankings for the next few months at least and kicks off his Premier League campaign against Rob Cross, while games against Michael van Gerwen and Gerwyn Price during the Rotterdam double-header could prove pivotal for ‘Snakebite’.

Former Premier League champion Gary Anderson seems to be struggling with his back as he was this time last year, but will certainly be hoping for a better start in the event in 2019 as ‘The Flying Scotsman’ kicks off with a repeat of the 2018 World Matchplay final against Mensur Suljović. Perhaps the most anticipated clash of the whole schedule will be played in the smallest venue, in Exeter, as Anderson seeks revenge of Gerwyn Price after their infamous meeting in Wolverhampton.

Daryl Gurney’s will be hoping of a return to Belfast where he was so brilliant last year as the fixtures at The SSE Arena are scheduled to be played after judgement night. A second Premier League season for ‘Superchin’ gets underway against Gerwyn Price while he will certainly be looking forward to potentially getting another one over Michael van Gerwen after his stunning Players Championship Finals victory over the world number one, this time in Berlin.

The Mercedez Benz Arena in Germany will play host to a Premier League night for the second successive year in 2019, with the pick of the line-up arguably Michael Smith v Mensur Suljović. Still the best two players in the world, Michael van Gerwen and Gary Anderson will meet in the latter’s homeland as they go head to head in Aberdeen on March 7.

These matches are just some of a fantastic schedule we’ve got coming up over the next few months before a slightly altered format comes into effect after judgement night. There will only be four matches per night from week ten onwards, but the remaining eight players will face each other over a ‘best of 14 legs’ format instead of ‘best of 12’ to further increase the spectacle.