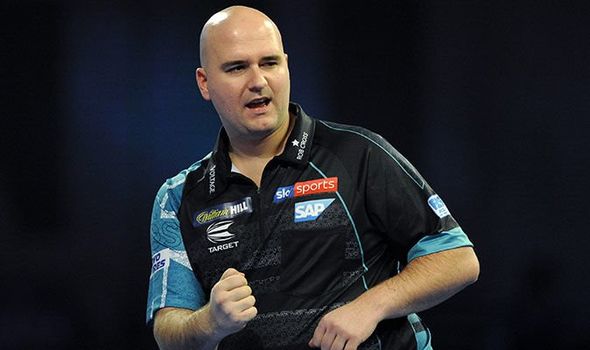 ‘The Iceman’ had one shot to beat MVG in the quarter-finals of the European Darts Open in Leverkusen recently, and failed to convert a 5-1 lead in Belfast as Van Gerwen surged back to squeeze over the line with a 7-7 draw, although it wasn’t enough to retain his lead at the summit of the league table. Although not as scrappy as their meeting in Nottingham, the final game of the evening took a while to splutter into life as the Welshman found the first real leg of quality with a 90 finish for a 12-dart hold and a 3-1 lead.

The World Champion then missed double 14 for a huge 145 outshot and Price punished him with a 128, before holding in 15 darts to move 5-1 in front. At that point the Welshman’s huge scoring dropped off from a 108 average down to about 93 although it ended at 98.73. Van Gerwen took the next three legs relatively comfortably, but the Grand Slam Champion stopped the rot in style, leaving 80 after 9 darts and going out in 13 to seize a strong advantage once more at 6-4.

The twelfth leg saw a crucial moment as the Dutchman hit 140 to leave double 2 expected Price to hit tops for a 7-5 lead, but when ‘The Iceman’ missed, so did Van Gerwen which meant Price went one away from his first win over the world number one in sixteen attempts. A sublime 11-darter from MVG took it to the final leg, and a superb showing from the Welshman, leaving 49 after three visits wasn’t enough as he squandered two darts for the win and Van Gerwen took out 82 to salvage a draw with a 102.32 average.

Arguably the standout game of night ten saw a repeat of one of Daryl Gurney’s games on his route to glory in Hildesheim at the weekend; a rematch with Rob Cross, who he also beat in Dublin last year to the delight of his home fans. They once again gave him a rousing reception, but it was Cross who took the early advantage, taking legs two and three in 25 darts to lead 2-1. That pattern continued for the majority of the contest, with ‘Voltage’ winning his legs handsomely and Gurney sealing the scrappy ones.

A 12-darter from the former World Champion saw him lead 4-2, before the Players Champion nailed a crucial 112-out to stay in touch. 13 and 14-dart legs saw the Hastings man move two away from the winning line, and he got over that mark sublimely, with a 124 checkout on the bull, although the dart only just stayed in to win on the Premier League stage for the sixth time out of his last seven and regain the lead overall.

Another game that went the full distance in this new format of best-of-14 for the second stage was Michael Smith against Peter Wright. It was a fascinating encounter with the first ten legs incredibly all being holds of throw, despite Smith averaging 10 points more than Wright. That was because ‘The Bullyboy’ was winning his legs comfortably, while just missing out on breaking several times. Amazingly, it was the Scotsman who got the first break on double 16, but Smith rallied superbly to lead 7-6.

‘Snakebite’ won the decisive final leg, though, to seal a share of the points and to ensure that he doesn’t get cut adrift from the rest of the Premier League. In the other game of the night, James Wade and Mensur Suljović renewed rivalries with their last meeting seeing some needle after ‘The Machine’ wasn’t happy with the Austrian’s methodical style of play. There were no such problems in Belfast, but it seemed to dilute the game somewhat as neither player really found their range until the final moments.

The opening eight legs were shared – the best effort a 14-darter from ‘The Gentle’, which he followed with two scrappy legs to take a 6-4 advantage. Out of nowhere, the former Champions League winner then piled in a 10-dart leg, before Wade regained a foothold in the match with a hold of throw and a stunning 137 checkout to send it all the way. Suljović kicked off the final leg with seven perfect darts, the eighth being agonisingly in the treble 10 to prolong the wait for a first Premier League nine-darter in two years.

The Austrian did manage to get over the line on double 6 to move back into the top four as the race to the O2 stepped up a notch at the SSE Arena in Belfast. Rob Cross now leads from Michael van Gerwen, with the remaining six players separated by just four points as they head to Liverpool next week in search of more crucial points. The pick of the games there arguably sees Michael Smith meet Van Gerwen as well as a crucial clash between James Wade and Daryl Gurney.