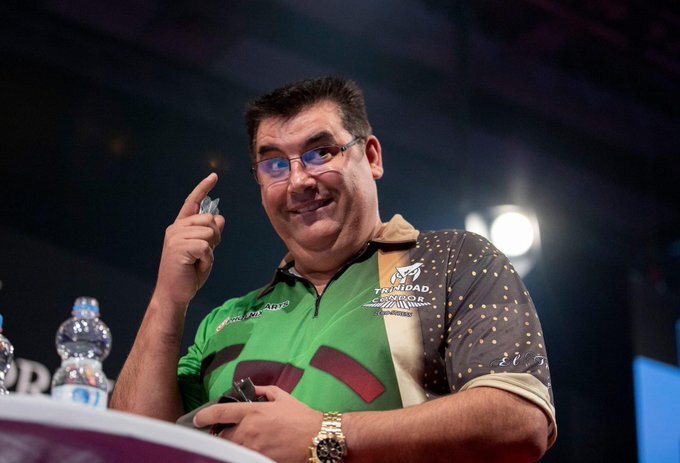 ‘The Iceman’ wasn’t anywhere near his best, missing 12 darts at doubles, and the Portuguese sensation punished him to win 6-3 with an average of below 90.

The pair missed an incredible 43 darts at doubles, but Van Gerwen came through 6-5 as he looks to lift his first European Tour title since May of last year.

Ian White is the only other man left to have won a Euro Tour, and the defending champion in Sindelfingen saw off Michael Smith 6-2.

Thursday’s Premier League champion, Glen Durrant, was beaten 6-3 by Dutchman Maik Kuivenhoven, who won five legs on the spin to seal a massive win for his rankings.

It should secure him a place at the European Championship, and with likely appearances at the Players Championship Finals and World Championship to follow, Kuivenhoven is now well-placed to finish the year in the top 64 and renew his Tour Card after an uninspiring debut season.

Darius Labanauskas has also given his year a shot in the arm this weekend, and a scrappy 6-2 win over Joe Cullen saw him consolidate his spot in the provisional World Championship places.

The undoubted performance of the afternoon came from reigning European Champion Rob Cross, who eased past Martijn Kleermaker 6-1 with a 101 average and six out of seven on the doubles.

Mensur Suljović also impressed, but in a very different fashion. He found himself 5-0 down to Jamie Hughes, and incredibly managed to pull it back to win, surviving five match darts in the process.

Nathan Aspinall was the other man to book his place in the quarter-finals, running out a comfortable 6-2 winner over James Wade.

The last eight line-up is notable for the disparity between the two halves of the draw. Van Gerwen’s half couldn’t be much stronger with the world number one joined by Aspinall, Cross and Suljović.

In comparison, Ian White is the only top 32 player in the other half with ‘Diamond’ facing Kuivenhoven in the quarter-finals and the winner of that taking on De Sousa or Labanauskas.