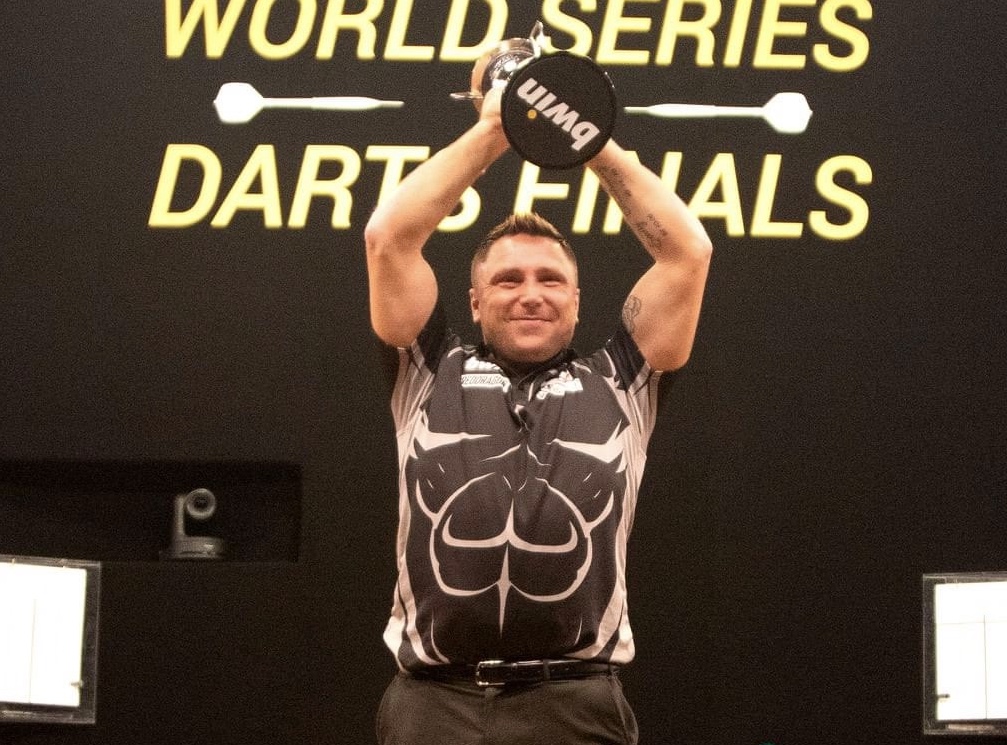 Price extended his winning streak to 17 matches after an outstanding week on the continent, scooping the £70,000 winner’s cheque in the process at the Salzburgarena.

The world number three claimed two PDC ProTour titles at the backend of the Autumn Series in Germany before heading across the border, and continued his scintillating form on Austrian territory.

The Welshman proceeded to convincingly overcome Peter Wright in a barnstorming semi-final encounter, before completing a resurgent victory over former world champion Cross in a fantastic final.

It was ‘Voltage’ who struck first, landing the elusive maximum and a stunning 144 checkout, only for Price to fire home three 180s of his own and construct a slender 3-2 advantage at the opening interval.

Cross would turn the tables in the second mini-session, claiming a crucial break of throw in the seventh leg of proceedings, before holding a 6-4 lead with legs of 15 and 14 darts.

The Hastings thrower soon after converted a 110 checkout to move 8-4 in front with only four missed darts on the outer ring, though, the Welshman sparked the fight back, reeling off three in succession to move within one of his opponent.

Cross executed a clutch 100 outshot to regain his two-leg cushion, but Price would follow with pivotal finishes of 56 and 74 to restore parity at nine apiece.

It was almost comeback complete for Price, and he sealed the deal with two consecutive legs, overcoming small amounts of interference from the crowd in the process.

What an incredible game that was ? pic.twitter.com/KKEgYgPJwA

Beforehand, Price scuppered the hopes of world champion Wright in the semi-finals, recording a 102.48 in a high-quality clash between two of the world’s elite.

Price drew first blood as he held his throw in 21 darts in a visibly nervy opening leg, but both players upped their standard in the proceeding stages of the match.

The Welshman raced into a 4-1 lead at the interval, with three maximums from Wright proving not enough as Price pinned legs of 12, 14 and 12 darts to construct a hefty advantage.

Wright converted a mesmerising 130 checkout on double eight on his way to reducing the deficit to a mere two legs at 6-4, only for Price to reel off three on the spin and edge closer to the finishing line.

‘Snakebite’ brought Price’s rally of legs to a halt, pinning a 13-darter, only for the World Championship semi-finalist to convert his third ton-plus checkout to move on the brink of the final.

Wright held throw in the tenth leg and didn’t relent despite masses of quality being thrown at him by Price, but the Markham man eventually prevailed with a 76 checkout on his lesser used double eight.

World number two Wright bowed out of the tournament in spite of recording a scintillating average in excess of the 108 mark, nine maximums and converting 50 per cent of his attempts on the outer ring.

Meanwhile, Cross denied Wade in a scrappy contest, with both multiple-time major champions averaging below the 90 mark in a rather bizarre semi-final affair.

Cross capitalised on 14 early missed darts on the doubles from Wade in order to hold a slender 3-2 lead at the first interval, and would eventually double that advantage come the second commercial break.

Former champion Wade remained hard on the heels of Cross, winning two of the next three legs with combination checkouts of 61 and an exceptional 170 on the bullseye.

Nevertheless, ‘Voltage’ would reel off three of the subsequent four legs to defeat Wade in a lacklustre contest and reach his tenth televised final and fifth on the World Series of Darts circuit.

Both Price and Cross return to action next weekend as the anticipated return of the European Tour commences with the German Darts Championship in Hildesheim.