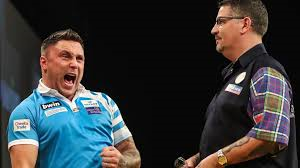 In a Sky Sports Podcast this week, Gerwyn Price has admitted he intends to fight his hefty fine handed down by the DRA earlier this year.

The Welshman received an eye watering £21,500 fine from the regulatory body, as well as a three months suspended ban, mainly for his part in heated exchanges and altercations during his Grand Slam of Darts win against Gary Anderson, in final where he lifted the trophy last November in Wolverhampton.

He was found to be “in breach” of the Darts Regulation Authority rules after a hearing in January this year. “He also admitted to a breach of the DRA Rules for putting inappropriate posts on social media,” a statement read.

Price said during the Podcast that he didn’t understand why the fine had been given to him, and he was shocked that his opponent escaped without financial punishment. Anderson only received a formal warning for a “non aggressive push” on Anderson.

Price advised that his appeal was submitted two weeks ago, and will re appeal until his financial penalty is completely revoked. He even stated his intention to take his case to the High Court should he still be unsuccessful.

The Podcast can be heard in full here: https://www.spreaker.com/user/skysports/podcast-16th-april-1_1

The Future Is Bright. The Future Has Always Been Bright