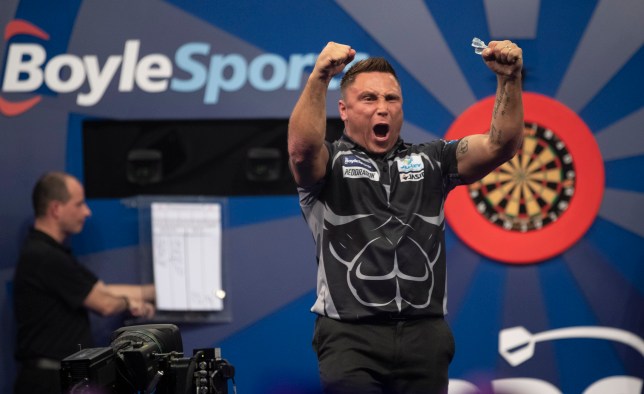 Gerwyn Price had to recover from a 2-1 deficit to beat William O’Connor in a tense affair in the second round of the PDC World Darts Championship.

Price, the second favourite to win the tournament with bookmakers, had to ride his luck at times before a bizarre miscount from O’Connor saw his chances scuppered at the death.

The Iceman also ensures he is not added to the casualty list in the tournament which includes Rob Cross, Michael Smith and Raymond van Barneveld.

Price started well, averaging over 100 in the first couple of legs to take the opening set.

However that scoring power, which has became synonymous with his game in recent times, was found wanting in the second giving the Irishman O’Connor the chance to level the game up.

The Iceman went 2-1 down in sets when missed doubles saw O’Connor able to cash in, with a 125 checkout at the start of the third set bolstering his cause with a 73% checkout ratio to boot.

Price responded with a 14 dart leg to pile the pressure back on the Magpie. However, the Irishman replied with a 128 checkout to further put the Welshman on the World Championship chopping block.

The two time Grand Slam champion nailed double 6 to set up a decider with O’Connor on a double to win the match.

The Irishman took the early advantage with throw before missing tops for a 2-0 lead, with Price taking out double 10 to level the game back up.

As the pair continued to exchange legs, the game went to a two clear leg tiebreak.

Two missed darts at double 4 and 2 before a miscount for O’Connor saw him lose the advantage before Price hit tops to go in front with the first trademark Iceman celebration of the evening breaking out.

Price hit 134 to set up double 18 which sealed the match in extra time to see him through with John Henderson awaiting in the last 32.

Dobey raced into a 2-0 lead over the left handed Dutchman who seemed to struggle to get out of the gate.

But, following the second interval, the Bomb put a surge on to bring the game back from what seemed like an inevitable win for Hollywood to a last set decider with a 39% checkout ratio in sets 3 & 4.

When the last set decider came it was Dobey’s superior finishing which saw him through to the third round with either Mensur Suljovic or Fallon Sherrock awaiting him.

Danny Noppert came from behind to beat Callan Rydz 3-2 where Kim Huybrechts awaits in the last 32.

In a high quality affair between the pair, the first ten legs and two sets were shared equally with both players averaging in the high 90’s.

The highlight came when Rydz hit a 160 checkout in the third leg of the first set.

The Riot from Bedlington saw himself go 2-1 up in sets after the interval, before a whitewash for Noppert in set 4 was secured with a scrappy 24 dart leg on double 1.

And from that point onward Noppie assumed control of the game, with a 110 break putting him to within a leg of the finishing line.

The Dutchman secured the win on double 16 to book his place in the next round.

Dave Chisnall made his way through to the third round of the World Championships beating Vincent van Der Voort 3-1.

Chisnall went three out of three on his doubles in set two which included a 97 checkout.

Van der Voort fought back to take the third set in straight legs, before Chisnall saw the game out a set later with a 124 checkout as he came through his World Championship opener unscathed.

Justin Pipe opened up the afternoon session with a 3-2 victory over Slovenia’s Benjamin Pratnemer.

The Force found himself trailing twice in the match in sets, finding a way to turn a 2-1 deficit into a last set win, prevailing with a 92 average.

Jan Dekker made his way through to the second round of the World Championships in a low quality affair against Ryan Joyce.

Joyce, who made the quarter finals last year, couldn’t re-live the form which took him to the last 8 despite coming back from 2-0 down.

Double Dekker secured his spot in the last 64 with a deciding leg victory despite an 84 average.

Henderson averaged 10 points more than his opponent, with Richardson only winning three legs throughout the whole match to comfortably book his place in the last 32 to take on Price.

Steve Beaton continued to roll back the years with a 3-1 victory over Australia’s Kyle Anderson.

Despite winning the second set, Anderson failed to trouble the Bronzed Adonis, winning just three legs outside that set win to send Beaton through with a date with James Wade set up in Round three.

Can a woman win a Tour Card in January?