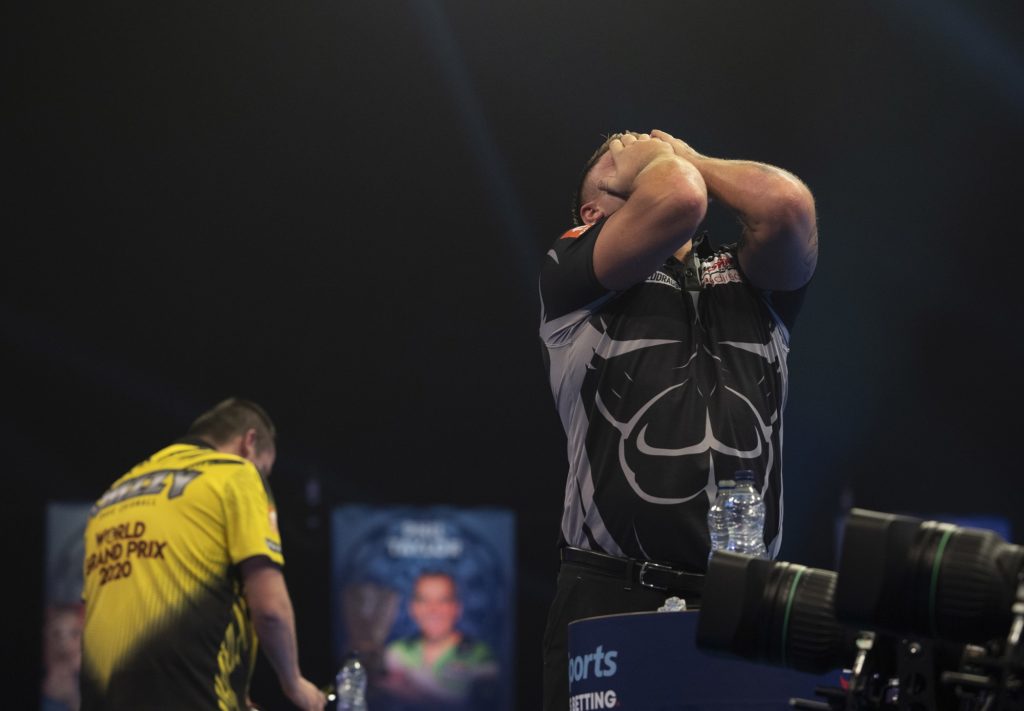 Gerwyn Price and Dirk van Duijvenbode will contest the World Grand Prix final on Monday evening after coming through their respective semi-finals in Coventry.

Price, whose double-start record wasn’t a pleasing one before this tournament, survived three match darts whilst fending off a valiant comeback from Dave Chisnall to book his place in the final.

The Welshman snatched the opening set thanks to a mesmerising 13-darter in the decider, but his form evaded him in the second as Chisnall whitewashed him to convincingly restore parity at one apiece.

Chisnall continued his streak of winning legs to construct a 2-0 lead in the third set of proceedings, converting finishes of 88 and 130 on the bullseye in the process.

However, it was Price who regained his slender advantage in terms of sets after reeling off three legs in succession, including a ton-plus outshot of his own, to turn the tables.

Two-time finalist Chisnall converted two more impressive finishes of 113 and 122 in the subsequent set, though, a proficient Price doubled his lead thanks to two 13-darters.

After extending his advantage to 3-1, Price nailed a 104 checkout to edge closer to the finish line, but Chisnall hung in there and claimed three in succession to halve the deficit and remain in the reckoning.

The St Helens man would then force a deciding set thanks to another dominant flow of action, but his fortune was turned on its head as he spurned three match darts to progress to his seventh major final.

Combination checkouts of 130, 69 and 56 proved essential for Price in the all-important set, with Chisnall extremely disappointed following another squandered opportunity.

A nerveless Van Duijvenbode raced out of the blocks, breezing through the opening set without dropping a single leg and mounting the pressure on the shoulders of the former finalist from Australia.

Whitlock responded and levelled up proceedings at one set apiece. ‘The Wizard’ noticeably slowed down the pace of the match in the second set, much to the annoyance of the Dutchman.

World number 73 Van Duijvenbode obliterated his opponent from that stage onwards, winning the remaining three legs to the loss of a solitary leg to book his place in his maiden televised ranking final.

The Dutchman has defeated four major champions during his time in Coventry, with Whitlock joining Mensur Suljovic, Dimitri Van den Bergh and Gary Anderson amongst those to fall on the receiving end of Van Duijvenbode.

The 28-year-old will now receive an invitation to November’s Grand Slam of Darts after reaching the final of one of the sport’s longest-serving majors, and rockets himself up the world rankings.