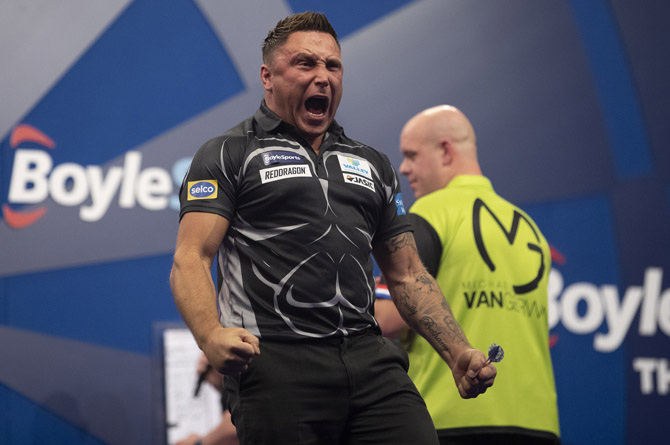 Having defeated van Gerwen en route to lifting his second successive Grand Slam of Darts title in November, Price ended van Gerwen’s hopes on his way to the title once again on Sunday.

After missing out at the final hurdle at the hands of a rampant Peter Wright on Saturday, Price got his campaign underway with a comfortable 6-2 victory over newly-integrated tour card holder Ryan Murray.

He then survived a scare in coming from behind to narrowly see off Luke Woodhouse, before denying both Simon Stevenson and Jamie Hughes to book his place in the quarter-finals.

Back-to-back ton-plus averages from ‘The Iceman’ sealed his place in the final as he overcame two former world champions in Steve Beaton and Stephen Bunting.

Meanwhile, world number one van Gerwen was in scintillating form at the Robin Park Leisure Centre, recording averages of 100 or above in four of his six matches on his way to the title decider.

Joe Murnan, Rowby-John Rodriguez and two-time world champion Gary Anderson were all swept aside by the 30-year-old, before narrowly edging past Spain’s Cristo Reyes to reach the last eight.

Markham’s Price opened up a commanding 4-1 lead in the final, only for the world number one to battle back and trail 5-4. However, Price outstretched his advantage once again, moving on the brink of victory with a 104 checkout.

Van Gerwen, who nailed the nine-darter during his semi-final against Poland’s Ratajski, reeled off the next three, though, to send the match to a deserved deciding leg, and with the Dutchman waiting on a single-darter for the match, world number three Price pinned a 94 checkout on the bull to prevail.

Surprisingly, van Gerwen now enters the month of March without winning a title for the first time since 2011, bringing to an abrupt end a staggering record, after having also lost out to Ryan Searle in the Players Championship Three final.

The PDC ProTour resumes next weekend as the European Tour gets underway with the inaugural Belgium Darts Championship, while the the Players Championship series continues with the fourth weekend from March 14-15.