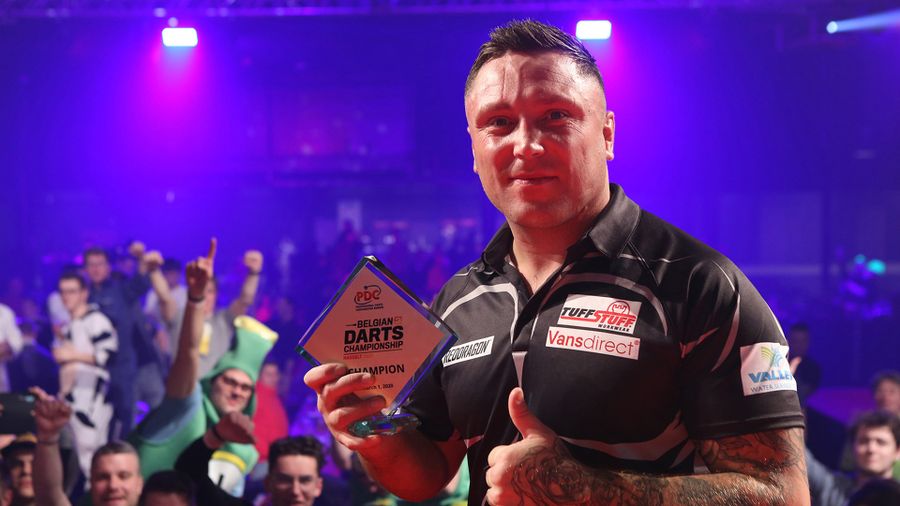 Wales’ Gerwyn Price lifted his second title of the season at the inaugural Belgian Darts Championship on St David’s Day as he defeated Michael Smith 8-3 at the Expo Hasselt.

Price’s winnings ways resumed as he claimed a second title in the space of seven days – a timeframe which also included his maiden Premier League victory of the decade against Peter Wright in Dublin.

It’s now 13 matches unbeaten for the world number three, and the 10th PDC title his career. He further cements his status as one of the most feared players on the planet at this present time.

Price began his triumphant campaign in Belgium with a comfortably convincing victory over Dutch qualifier Wesley Plaisier – who came through the Associate Member qualifiers on Thursday evening.

The Welshman then thrashed Jamie Hughes, recording a scintillating 103.66 average in a whitewash win, despite his opponent posting a 101.81 with nothing to show for his envious efforts, before continuing his dominance in a rout of Mensur Suljovic.

Having dropped just three legs heading into the semi-finals, Price imminently fell 3-0 down against the in-form Dirk van Duijvenbode – who had defeated Luke Woodhouse, Ian White, Jeffrey de Zwaan and Nathan Aspinall on his way to a second PDC semi-final.

However, after the Dutchman pinned an outstanding 155 outshot and immediately kicked off with a maximum, ‘The Iceman’ upped the ante and the vocals, reeling off seven of the next eight legs and roaring his way into the Belgian Darts Championship final.

Smith was in blistering form throughout the weekend in Hasselt, vying to elevate his way back up the ProTour rankings after being forced to attend the Wigan qualifiers for the upcoming European Darts Grand Prix in Germany.

It was Smith who drew first blood in Sunday’s showpiece, with the opening four legs of the final going the way of the player throwing first, before Price began to take full control.

The Grand Slam of Darts champion reeled off five on the bounce to move on the brink of his third European Tour crown and first outside of Germany.

Smith responded with a 14-darter won on his favoured double 10, though, his third leg of the match merely delayed Price getting his hands on the first ever Belgian Darts Championship trophy and the £25,000 winner’s cheque.

“The crowd were fantastic all weekend, I appreciate everything from them,” Price told pdc.tv following his victorious exploits on Belgian soil.

“I think my checkouts this weekend kept me in the games. I hit some big shots when I needed them most to change the way some games were going.

“I think I played pretty well all the way through the tournament and hopefully I can keep this form going into the Premier League and UK Open next week.”

Elsewhere, the in-form Dirk van Duijvenbode delighted the Belgian crowd who took to the Dutchman’s entertaining presence throughout the tournament.

Michael van Gerwen’s three-month wait for a PDC title goes on after the number one seed departed in the third round at the hands of a decider leg against eventual finalist, Smith.

The European Tour will return with the annual European Darts Grand Prix in Sindelfingen, Germany from March 20-22.

Meikle and Nijman win on Development Tour in Hildesheim