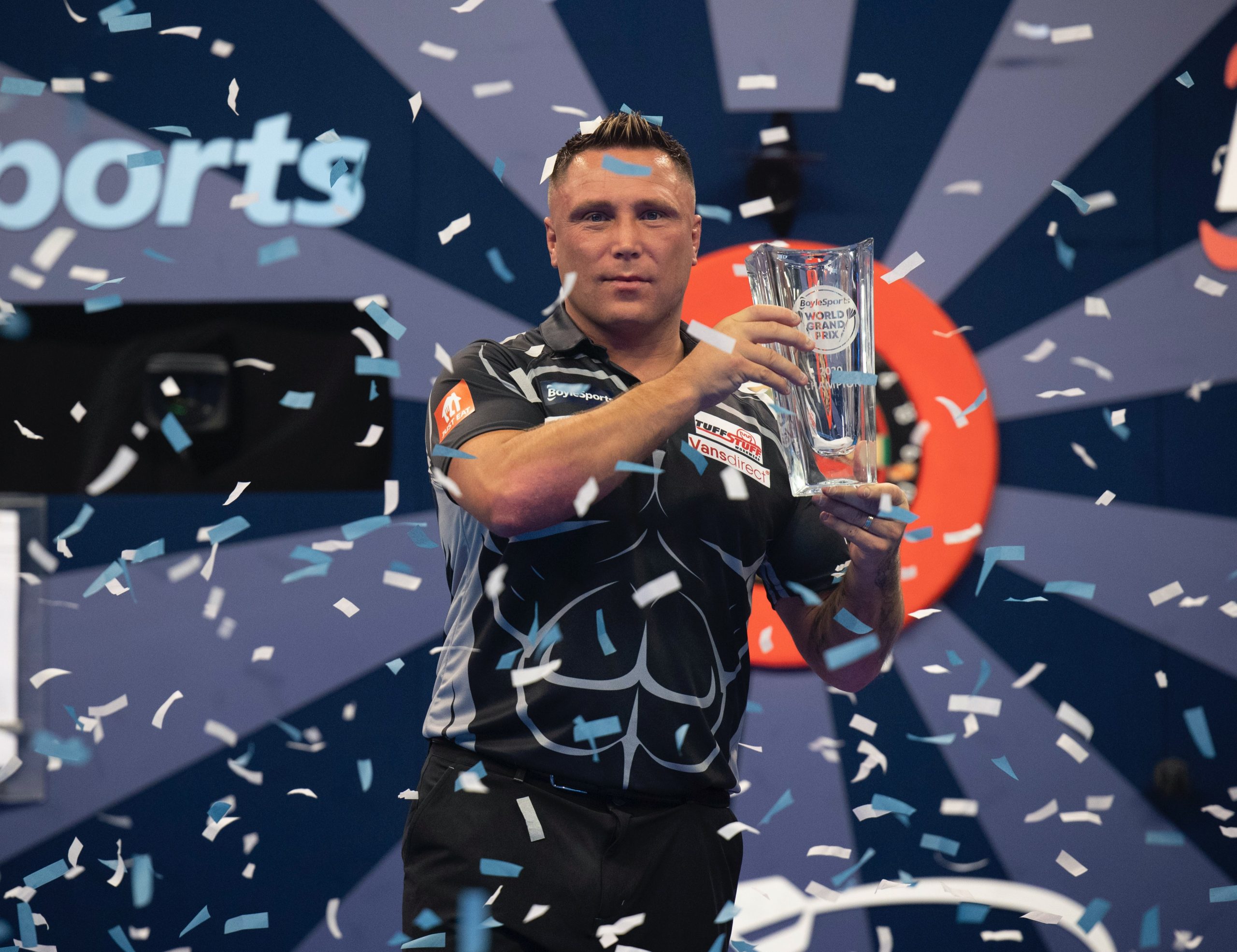 Welshman Price rose to number two in the world rankings by virtue of lifting his fourth televised title and winning his fourth tournament in less than a month at the Ricoh Arena.

‘The Iceman’ had never surpassed the quarter-finals at the unique double-start staging before this year’s edition, but wins over Jermaine Wattimena, Kim Huybrechts and Jeffrey de Zwaan moved him into the last four.

Price then survived multiple match darts in the semi-finals against two-time finalist Dave Chisnall, before beating a valiant Van Duijvenbode 5-2 in the title decider.

“At the end I was thinking about the [Dave] Chisnall game again, and how I almost threw that game away,” admitted Price following a prosperous campaign.

“I seem to punish myself all the time, I kept bombing opportunities, and I need to cut that out of my game. I can’t let players like Dirk back in.

“I knew tonight whenever I put him under pressure he would struggle, and for most of the game I did that.

“This one’s over now. I’ll enjoy it tonight but there’s a European Tour event coming up on the weekend to look forward to.

“I’ve got one eye on the Grand Slam of Darts in November. I’ve got good memories of that tournament and now good memories in Coventry too. Hopefully I will have a good back end of the year.”

Price raced out of the blocks and obliterated the debutant in the opening set without dropping a leg, with Van Duijvenbode narrowly missing his favourite double for a 140 outshot to hold his throw in the second leg.

The Dutchman subsequently got off the mark in terms of legs, landing a clutch 70 checkout following a missed dart at double tops from the eventual champion.

Nevertheless, impressive combination checkouts of 76, 77 and 87 would double Price’s lead and mount the pressure on the broad shoulders of Van Duijvenbode, despite the world number 73 forcing a deciding leg.

Price’s scintillating standard then began to marginally descend as Van Duijvenbode halved the Markham man’s deficit, landing a 14-darter on throw to do so.

A string of three legs in succession then regained the Welshman’s two-set advantage, before he came through yet another decider in set five to move on the brink of claiming the £110,000 winner’s cheque.

Van Duijvenbode produced probably his most promising moment of the final in the fifth set, finding the centre of the bullseye for a mesmerising 135 checkout.

Despite Price edging towards the finishing line, the 28-year-old failed to falter as he came through a deciding leg thriller in set six to reduce the arrears.

He would proceed to fire home his seventh and eighth maximums and claim the opening two legs of the subsequent set, though, unfortunately his luck stopped there as did his hopes of gaining glory.

A rampant Price snatched three consecutive legs to secure his fourth televised accolade, converting a magnificent 102 checkout on his favourite double in the final leg.

‘The Titan’ might have fell short in the final, but the renowned aubergine farmer from s’Gravenzande in the Netherlands should be immensely proud his achievements.

Usually experience in the double-start format in paramount to success, but Van Duijvenbode overcame four major champions on his way to his maiden ranking final on the professional scene.