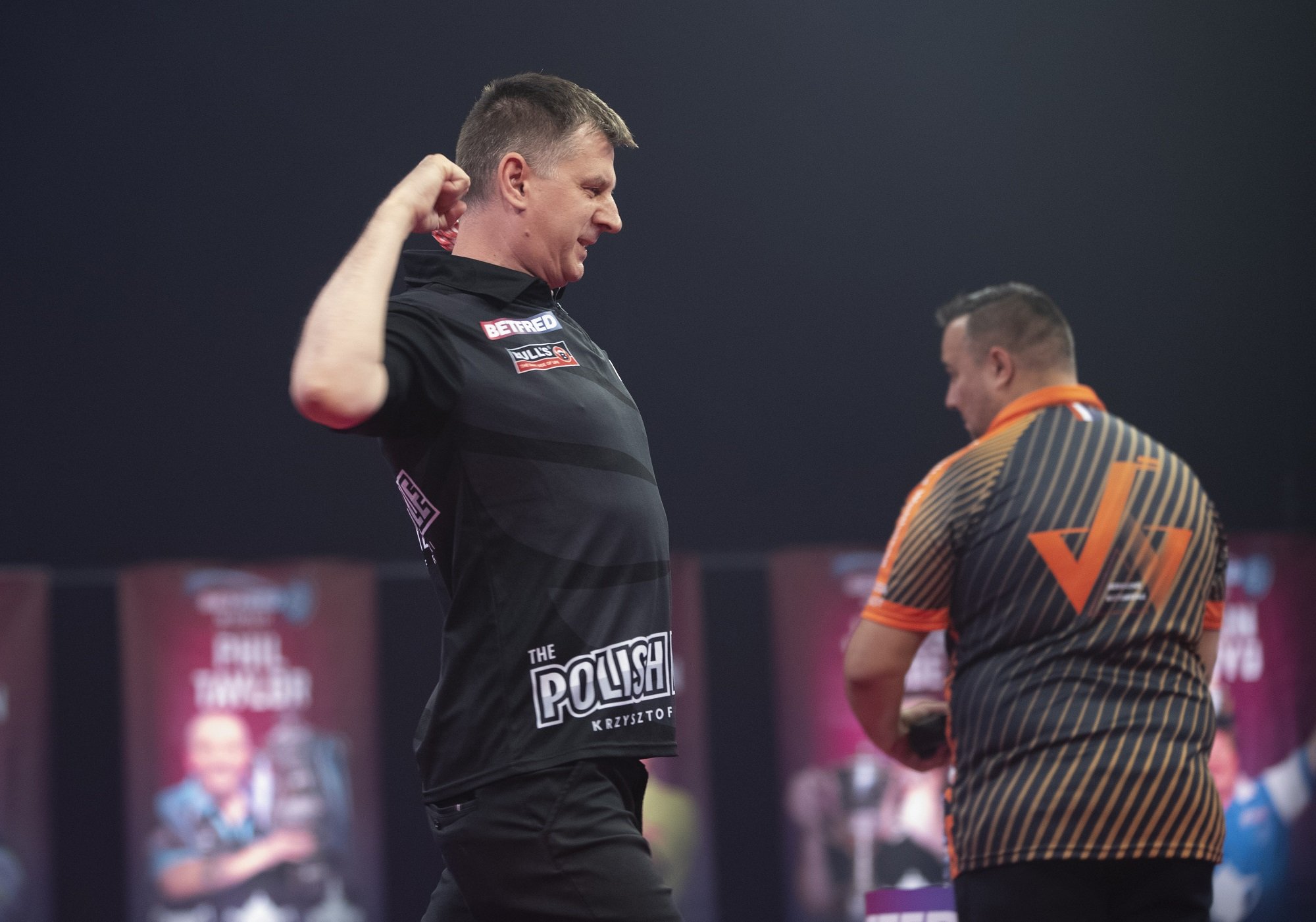 Krzysztof Ratajski set the standard as the Betfred World Matchplay commenced at the Marshall Arena in Milton Keynes, while both Michael van Gerwen and Gary Anderson progressed.

In rather different circumstances with a massive screen providing fan interactions and an artificial atmosphere being pumped into the auditorium, the first session of action since the World Matchplay’s 1994 inception took place away from the iconic Winter Gardens.

Players were tested for coronavirus prior to the return of televised darts and a number of protocols were put in place throughout the evening, with Poland’s Ratajski shining on the opening evening.

The Warsaw-based thrower entered the tournament as the 13th seed, and proved his worth with a blistering 107.56 average, six maximums and a finishing masterclass in an emphatic victory over Jermaine Wattimena.

The Dutchman punished Ratajski for an unusual missed dart at double to draw first blood with a terrific 118 checkout on the lesser used double 19, though, a mesmerising 132 checkout from the Pole immediately levelled up proceedings.

Ratajski would then reel off three legs in succession to hold a 4-1 advantage at the first interval, before a determined Wattimena returned with back-to-back legs and consecutive 15-darters to move within one of his red hot opponent.

Wattimena’s excellence sparked a purple patch for the reigning Gibraltar Darts Trophy champion as he claimed six of the next seven legs to run out victorious, pinning impressive checkouts of 102 and 118 along the way.

“I am over the moon with this win,” said Ratajski, after recording his highest career televised average. “It was a really good match for me and the average was super.

“I tried to be focused on every dart and the Summer Series helped me to prepare for this because we hadn’t played for so long – three months without tournaments.” 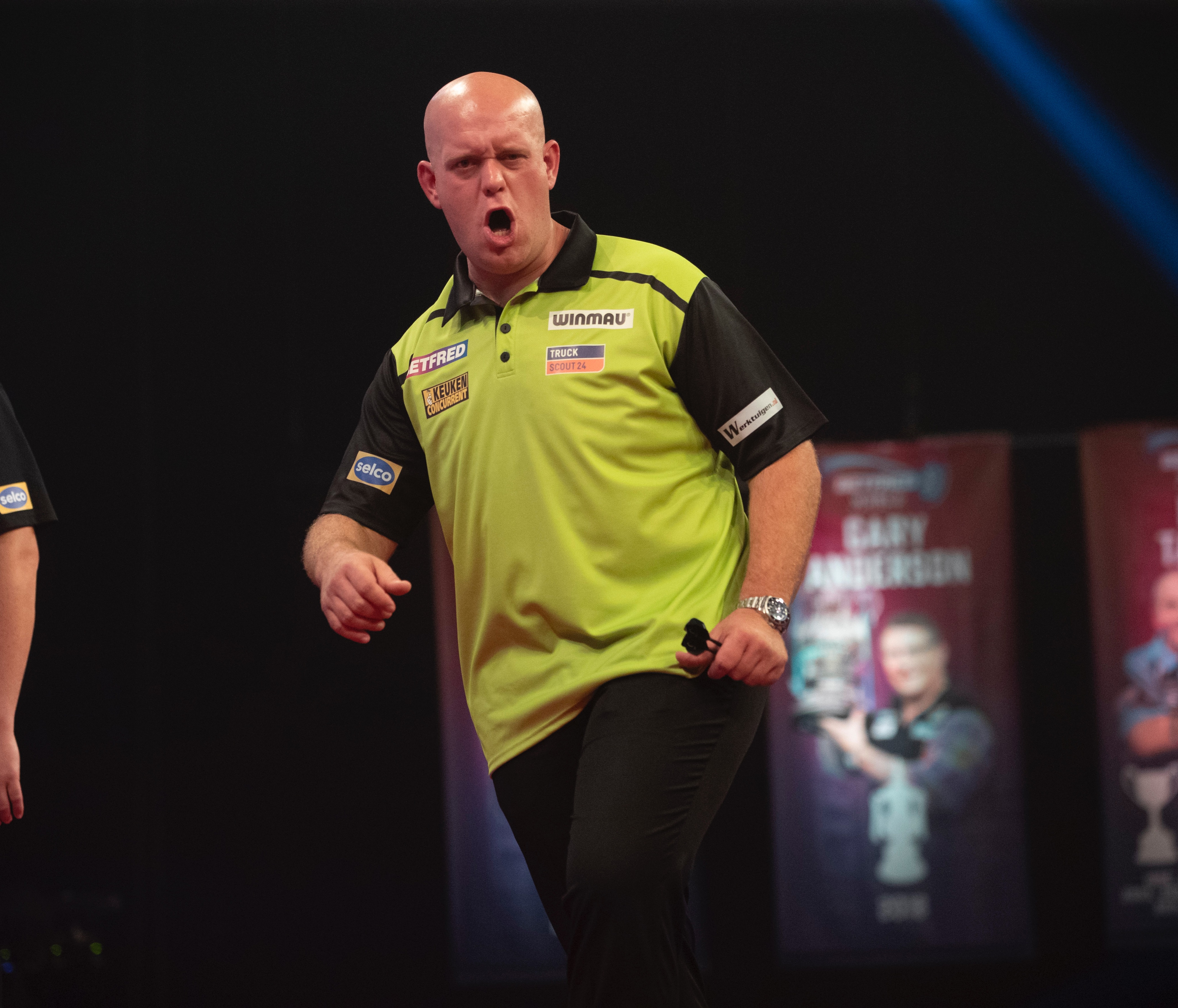 Michael van Gerwen progressed to the second round after overcoming a resolute Brendan Dolan in Milton Keynes, but the world number one was highly critical of his performance, despite averaging just short of the 100 mark.

In a match riddled with squandered opportunities in the doubling department, van Gerwen led 4-1, but the Northern Irishman clinched four of the next five legs to level up proceedings at five apiece, converting a crucial 128 checkout in the tenth leg.

Van Gerwen then reinstated his two-leg cushion, however, missed doubles from the Dutchman gifted Dolan the chance of keeping himself in the match – which he jumped all over and remained intact at 7-7 as the latter stages approached.

The three-time world champion then produced back-to-back 13-darters to move on the brink of progression, before eventually getting over the line thanks to more missed doubles from the former major finalist.

“A win is a win and it doesn’t matter how you win, but I made it hard work for myself and I struggled today,” said Van Gerwen.

“I think I played okay but at 4-1 I needed to keep the pressure on Brendan and I didn’t. It was strange and it was new for me but you have to deal with it and I’m glad that I managed to win.

“I demand more from myself but I averaged nearly 100 and that was enough. I have to do better, I’ve got two days to rest and prepare for the next game.”

Van Gerwen will take on former European Championship winner Simon Whitlock in the second round after the Australian capitalised on a below-par performance from debutant Ryan Joyce.

Newcastle’s Joyce was unable to replicate the form that saw him clinch a maiden ranking title just last week, and Whitlock breezed to a comfortable 10-4 victory at the same venue to continue his first round success at the World Matchplay.

Whitlock averaged below the 90 mark and missed 19 darts on the outer ring, but those numbers produced proved enough to prevail to the second round for a fourth consecutive year.

Elsewhere, Gary Anderson and James Wade will contest a mouth-watering second round clash on Tuesday following the resilience of the esteemed duo against an injury-struck Justin Pipe and NHS key worker Keegan Brown respectively.

Despite leaving the stage for the interval whilst strutting his stuff in scintillating fashion and averaging in excess of the 113 mark, Wade was forced into overtime by former world youth champion Brown.

Brown averaged just spare of the 100 mark and registered seven maximums, though, a very Wade-like performance meant the former champion progressed with a 12-10 victory in a tie breaker. 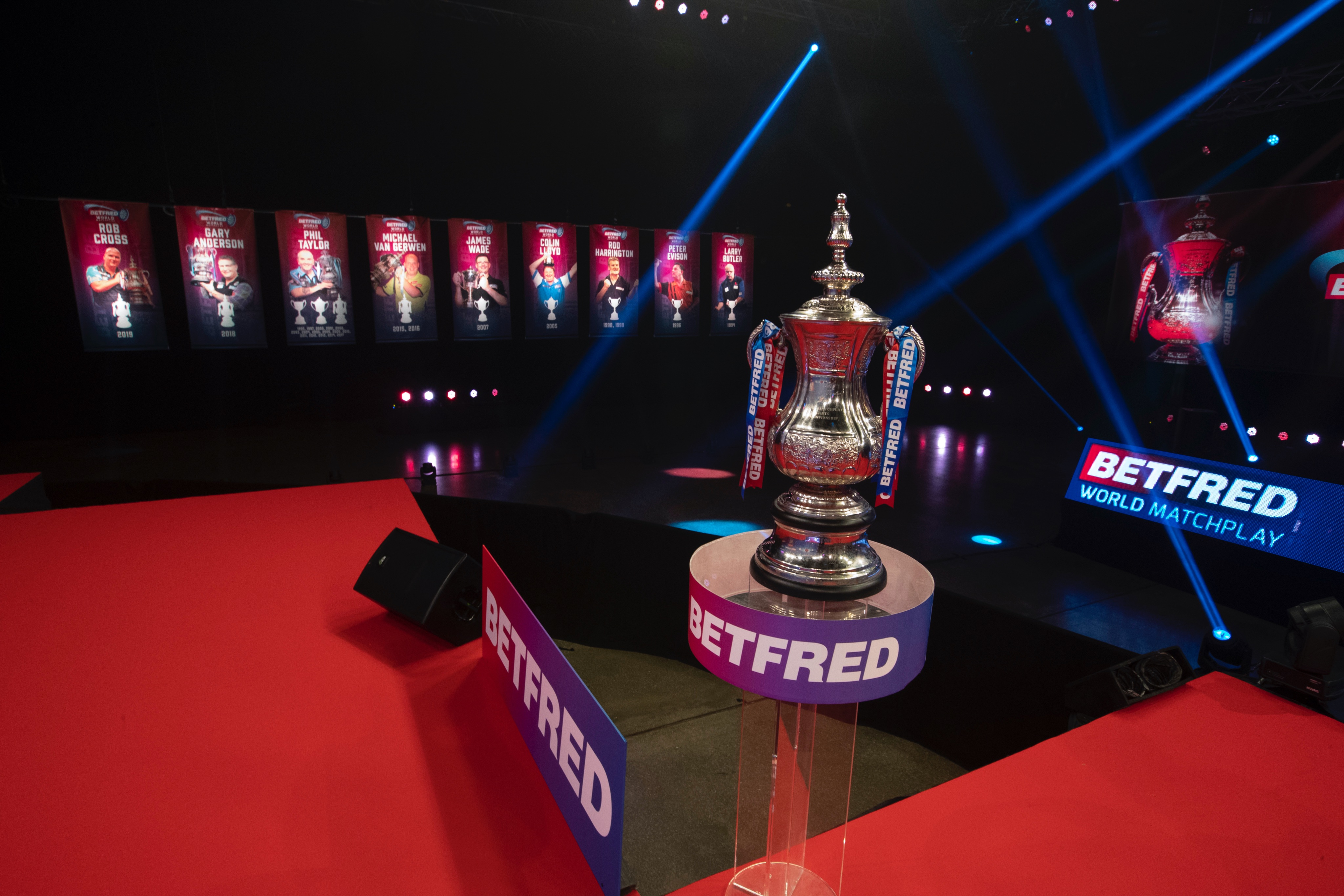 The iconic Phil Taylor trophy that the 32 players are competing for (Photography: Lawrence Lustig/PDC)

Meanwhile, two-time world champion Anderson eventually got over the line against a pertinacious Pipe – who held his own whilst nursing a visibly painful elbow injury.

The pendulum swung back and forth in the early stages of an originally closely contested encounter, with scores at one point in the match level at five apiece, but five legs in succession placed Anderson’s name in the second round.